No Rest for the Living.

Graveyard Keeper begins on a rather somber note. It opens with a nameless character – the hero – out doing some shopping on a rainy night. The music playing in the background hints that something tragic is about to happen. Words scroll across the screen:

“Even in everyday routine there is a place for loving and feeling loved…especially when someone misses you.”

This can’t be good…

The hero then receives a call from what the Caller ID displays as a woman clutching a heart-shaped pillow. “Isn’t that sweet”, I say to myself. But before I have time to really appreciate the moment, a car horn pierces through the rainfall and the brief and abrupt sounds of an accident fill the night sky. Seems like our hero is very much dead. But this is only the beginning of Graveyard Keeper’s story. 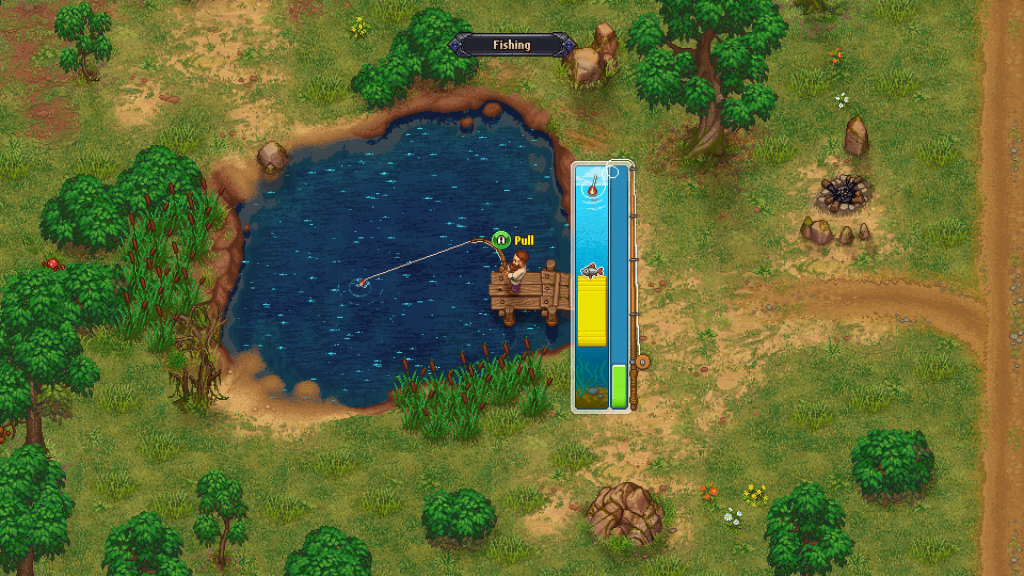 The hero awakens in a fog-ridden space and is greeted by a shadowy figure with red eyes. He informs our hero that he has ‘turned a page’ in his life that he is ‘home’ now, in the graveyard. He christens our hero as the ‘Graveyard Keeper’, and informs us that we must be good in our new role if we are to ever hope to see our lady love again. The mysterious man tasks us with digging up someone named Gerry who apparently has the answers we seek. As the questions begins to mount, our hero suddenly slips out of that foggy realm and awakens in a small house, determined to find Gerry and to make sense of what is going on. Well, it isn’t long before we dig up Gerry – who just so happens to have been buried in our backyard. And whatever serious tones the game was trying to set-up, quickly vanish in the blink of an eye as Gerry turns out to be a talking skull who then prompts you to harvest fresh corpses for meat before giving them a proper burial.

I’ll give you a second to let that sink it.

Graveyard Keeper is a lot like Stardew Valley…if Stardew Valley suddenly found itself in the trappings of a cult classic B-Horror Movie. The gameplay is a farming-sim through and through but instead of the focus being on parsnips and potatoes, Graveyard Keeper is all about creating and maintaining a nice place to lay the dead to rest. Each gravesite has a number within it which indicates the quality of your work, and quality is determined by a few factors. For instance laying down a Flower Bed and a Stone Crucifix are far better options than settling for a flimsy Wooden Cross and nothing else. Quality is also effected by the state of the corpse you inter. While you have the option of being an ethically-sound Graveyard Keeper and take the best care of the dead that are left at your doorstep by a…talking donkey (told you, seriousness goes out the door FAST), you can also bend your morals a bit and harvest a corpse for its precious organs, blood, and even bones. Doing so will go towards your valuable research and help gain points for the game’s Technologies System.

In order to be able to craft upgrades to further beautify your graveyard, you will need to earn Points. Points come in three distinct categories: Red – which represents your hand-crafting skills, Green – which indicates your understanding of all things in nature, and Blue – which signifies your spirituality and your knowledge of things not of this world. But having knowledge of how to build an item or cultivate certain crops is only half the battle. Resource gathering is also a big factor in Graveyard Keeper so expect to chop wood and mine for minerals in order to put your studies to practical use. While it seems that the game provides you with an awful lot of leeway in how you can go about creating the perfect graveyard, the amount of information and mechanics it throws at you at the onset can be a little overwhelming.

Graveyard Keeper has a lot of flexibility in terms of what you should prioritize. It never really holds your hand but instead gently ensures that you put your hand into each of the myriad of systems it has built into it. The sense of freedom is rather nice but I often felt that even the slightest bit of guidance would have gone a long way. I’m a pretty patient gamer and I have no problem getting down into the nitty-gritty of a game’s mechanics, but I really felt that I needed just a little something to make all these systems a bit more manageable.  On top of the graveyard upkeep and corpses to deal with, expect to farm, mine, study, and sell. Oh, and don’t forget about your relationships with the townsfolk. Much like the graves and the corpses you will so lovingly tend to you, you also need to make sure that your rapport with the living is just as good as with the dead. It takes some getting used to but once you find the proper balance, it eventually all starts to make sense – it just may take you some time to get there.

I’m not a the biggest advocate of farming-sims only because of how much of a time sink they can be. But Graveyard Keeper tickled a certain morbid bone in me and I applaud developer Lazy Bear Games in its clever spin on the genre. Graveyard Keeper promises hours of fun for those willing to invest the time in it. It also helps that its got a wicked sense of humor and doesn’t take itself too seriously.