Switch Galaxy is a game by former Liverpool Studios developers, and you can tell in every aspect. Switch Galaxy captures the same sense of speed and beauty that Wipeout always shined in. The music is great, along with the designs of everything from the vehicles, down to the tracks and barriers. Even the price is great. The only real major problem I have with it is that it is a little too short. When that is your only complaint, you know you got a pretty good game on your hands.

The gameplay is simple, yet wonderful. You move from lane to lane, dodging enemies and barriers, and collecting credits as you go. There are power-ups to help you pass barriers; destroy barriers, and one to steal credits from enemies. They are all basic, but can get hard to see when flying across space at the break-neck speeds you can reach in this game. It can also be a little hard to see upcoming enemies, as they sometimes can blend in with the surroundings, but I think it just adds to the little difficulty in the game. 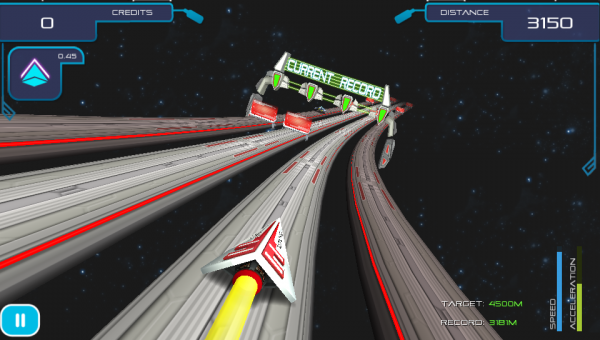 The “story” mode of the game lets you travel from galaxy to galaxy, imposed with a time limit. Hitting barriers and enemies will slow you down, but most of the time they are really easy to dodge. I only failed to make time once in a level in the latter half of the game. There are about 25 levels, which, if you take every path and do the challenges, equates to about a an hour or so of content. The challenges are really no challenge; they just require you to reach an easy distance on the track. I wish there was more to the story mode, it had lots of potential.

However, there is one mode that can become obsessive, and what I think is the real “meat” of the game. It is the survival mode, where it makes the game like an infinite runner. Once you get far enough, it really gets hard, and it always makes me want to try to beat my previous score. They set goals for you, but I wish there was some sort of leaderboard, so I could strive to beat other peoples’ scores. If you reach these preset goals, you get a ton of credits, which can definitely help you go farther. 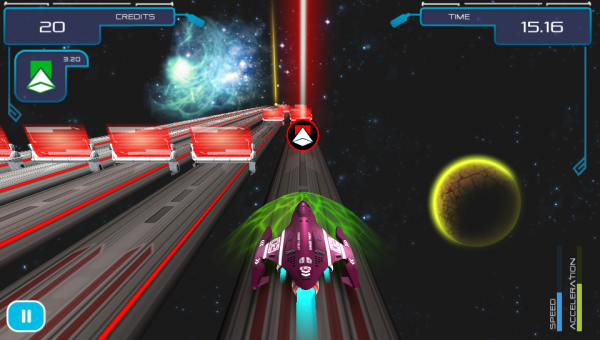 The credits I speak of are the in-game currency. You can use them to buy upgrades, new ship skins, and one time shields and such. The ship upgrades are cool, and will definitely help you with that survival mode, but everything else is just okay. However, you cannot use the barrier passes in the survival mode, which stinks, because that’s where I really need them. The ship skins are okay looking (I prefer the original), and the barrier blocks just weren’t doing it for me. The ship upgrades are the only thing I really bought, and are the only things that really did any good for me in trying to make my performance in the game any better.

Everything else about the game is awesome. To the upbeat sort of dubstep-like music, from the beautiful graphics of all the ships and the tracks you travelled on, all the way down to the minute details of the game, like giving population numbers and race percentages for each galaxy. Even though it’s a Playstation Mobile title, you can really tell that Atomicom put a lot of time, detail, and effort into the game.

Switch Galaxy is a great Playstation Mobile game, with simple yet fluent gameplay, a good upgrade system, awesome graphics, and a great soundtrack. The game captured the great sense of speed, aesthetic, and style that Wipeout nailed for years, and it has worked out amazingly. The only thing that’s wrong is that there aren’t a lot of levels for the story mode. This is a great game, and I suggest you go pick it up right away.