Fuel Overdose is much more than a top-down racer. It is an excellent game that combines features from other games, and implements them perfectly. While most top down racers are just racing, ut Fuel Overdose tests your dexterity and strategies like no other racer I have played. Its combination of cars and combat provide many possibilities, and will keep you coming back for more, and believe me there are a lot. Fuel Overdose is a PSN game you shouldn’t pass up.

Let me start off with the racing mechanics, the heart of the game. The feel of it is very reminiscent of Motorstorm RC, in the way the driving controls, but Fuel Overdose has shifting camera angles. The camera won’t stay top-down the whole time, it strategically places it in the best viewing angle for the situation. This doesn’t always work well, as it would glitch and I wouldn’t be able to see my car, but those moments were few and far between. 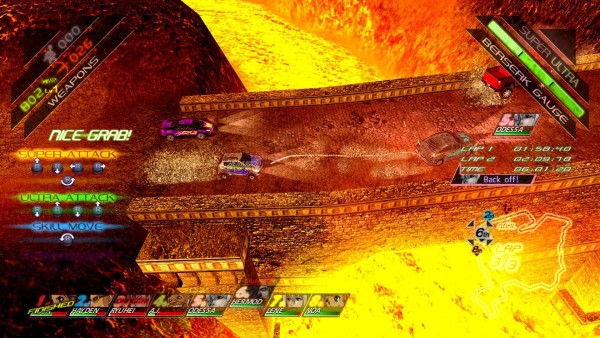 But where Fuel Overdose starts to set itself apart is in its combat. There are three basic weapons that every vehicle is equipped with, the machine gun, the rocket launcher, and mines. You also have bomb triggers. There are bombs on the track, and you have triggers you can use to detonate them when they are on your screen. If you have ever played Split Second, it’s similar to that. I used this very often, and it is one of my favorite weapons. One more weapon you have is your special weapons. Each character has his or her own, and are earned by building up your berserk meter to certain levels. You build up your meter by getting hit by other cars weapons. I never felt the urge to use these much, as the base weapons are powerful enough.

There is another tool fundamental to the arsenal in Fuel Overdose, the grappling hook. There are endless possibilities for the grappling hook. You can use it to turn sharp corners and give yourself a massive speed boost. But, you can also hook onto other cars, and that is where it really shines. You can use other cars to give yourself a boost, electrocute them and damage them badly, or even use them as a comeback in a race. I say that last one because if your car turns around and you are backwards, you can use the grappling hook to turn your car around and boost ahead of everyone. You don’t know how many times that grappling hook saved a race for me. Especially with the tiny car I always used.

The cars are all unique, with their handling, speed, and acceleration. I used one car the majority of the time called the Cadiz. It had good handling and acceleration, but not much speed or durability. But you can play with any strategy, and use a bulkier car with more speed and less grip, or even a big rig. 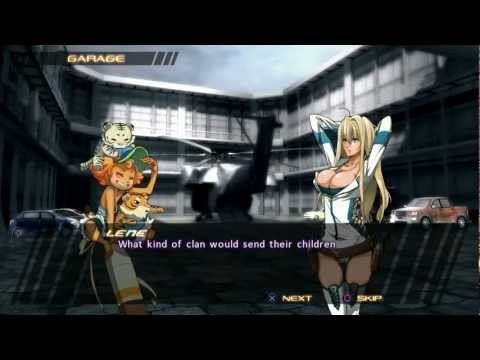 There are 4 different game modes, free race, championship, story, challenge, and multiplayer. The free race is self-explanatory, pick your car, character, track and race. Championship is something similar to what you would see in Mario Kart, where there is a series of 5 races, and the person with the most points wins. The multiplayer is okay, but is really only good for playing with friends. It’s fun, but can’t keep my attention for a long time, because there is only one fun game mode. The driving mode is not fun, because if you start out in last, you stay in last because it is pretty much impossible to make a comeback without weapons. Also there is basic, with only your basic weapons. So there are 3 game modes, and they are mostly okay.

The story mode is also okay, there is a cool apocalyptic sort of premise, but the individual character stories are not good. The premise is that the Earth gained an asteroid satellite, and it caused some crazy disease. One group of people called the Consortium took all the vaccine, and kept it for themselves. The started an event called the “Race of Chaos” and had representatives from other clans race to earn the vaccine. You race as each character, and find out why each is in the race. This is cool, but the story cutscenes are only character models and dialogue boxes. I wish they would have done a little more for the story, it could have been great.

The last game mode is the challenge mode, and the word challenge is an understatement. The challenge mode has different kind of races, such as the no weapons we saw in the multiplayer or a mode where instead of winning; you have to wreck all of your opponents’ cars. Some of them are impossibly hard, and will take multiple tries. This is fun though, and a great addition to the game. 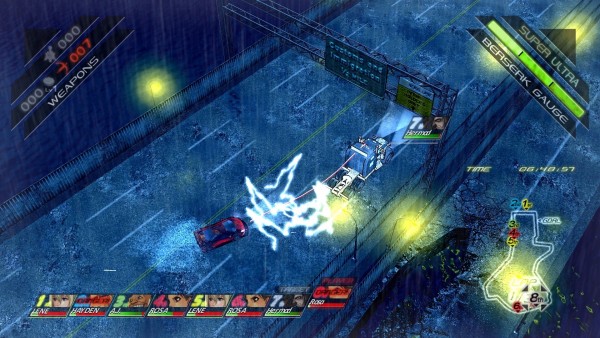 The art style and music fit the atmosphere as well. The music is an upbeat kind of techno music. It is good for a racer like this, and never got boring. The art style is great too, with a look reminiscent of Borderlands , with the exaggerated black outlines and vibrant colors. The story cutscenes have an anime look, and are cool. The music or art never get old or boring, and are designed very well.

Fuel Overdose is a must buy PSN title, that will be out for only $9.99. It is unique, and like nothing I have ever played before. It also offers tons of content, and a challenge that I haven’t experienced in a long time. This is not a top down racer, it is Fuel Overdose, and Fuel Overdose is one amazing game.