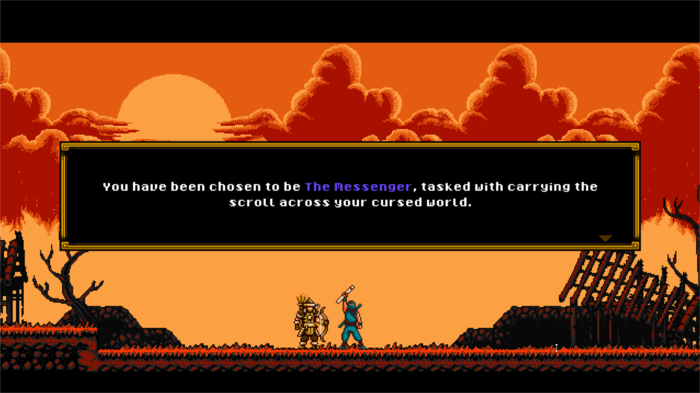 For me (and most fans I imagine), Ninja Gaiden II: The Dark Sword of Chaos was the gold standard of Ryu Hayabusa’s 8-Bit adventures. It was a sequel that vastly improved over its predecessor and maintained its signature high-level difficulty. It was the best representation of classic Ninja Gaiden. Little did I know that Sabotage Studios was about to set a new benchmark in 2D side-scrolling platforming with The Messenger – the best Ninja Gaiden game I’ve never played.

The PAX East 2018 demo begins with a displeased ninja dwelling on the bothersome chore that is his daily lessons. Apparently there is a prophecy and said prophecy has foretold the end of the world – an apocalyptic scenario that can only be prevented by an ordained savior known as the ‘Western Hero’. The only problem is that doomsday more of a hamper on the ninja’s free time as he considers the stories to be a whole lot of hooey. Well, it doesn’t long for a demon army to start raining fiery meteors upon the ninja’s village both proving wrong and wiping out his entire village in one fell swoop. It’s at this point where that aforementioned hero shows up (fashionably late of course), hands the ninja a scroll, and tasks him with delivering it to East in hopes of ending the curse that has befallen the land. Pretty serious stuff right?  Well yes…and no.

Tonally, The Messenger knows that it’s out to completely obliterate genre tropes. What should play-out as a serious, by-the-numbers platformer, feels more like it borrowed a page from Deadpool’s handbook. From the short time I spent with the game, I was met with video game in-jokes and references, a chatty Shopkeeper that constantly breaks the Fourth Wall, and laugh-out-loud moments during a boss fight of all places. It’s the game’s way of telling you to assume nothing and forget nearly everything you have come to expect from the genre. Even the graphics somehow manage to defy expectations.

Aesthetically the game could not be anymore Ninja Gaiden; the main character is the spitting image of Ryu Hayabusa and is even sporting his trademark blue garb. The graphics are full of color and pop off the screen. Seriously, I have never seen a retro-style title that looked this good. It captures the simple sprites of the NES-era but also elevates the color palette to bold new places. This is further evidenced by The Messenger’s slick gameplay gimmick: a time warping mechanic which transports the game from an 8-Bit backdrop to an even more vibrant 16-Bit style. While I wasn’t able to gather from the demo what the full implications of this graphic swap would be, each style does impact the level design and the layout of certain obstacles. So even though there might be a blocked path/obstruction in the 8-Bit landscape chances are it won’t be there once you transition of 16-Bit. I was also informed by Sabotage Studio that the graphical transition won’t only be available in the moment-to-moment gamplay – that players can look forward to explore the entirety of the game in both 8-Bit and 16-Bit sprites. 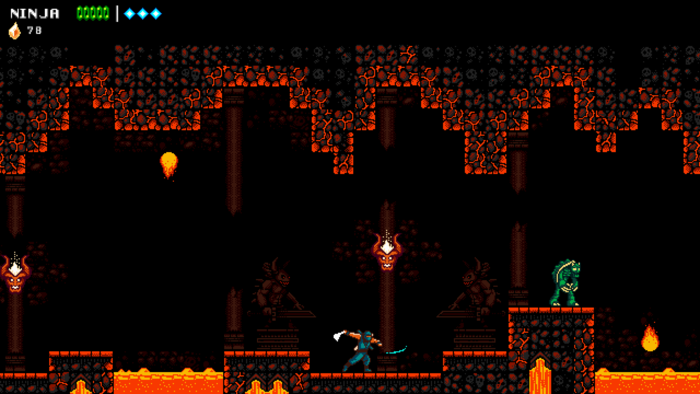 For a game that is clearly inspired by one of gaming’s most important franchises, The Messenger doesn’t mess around with perfecting the Ninja Gaiden control scheme. From the sword slashes to gripping to walls, the controls are insanely tight. I often wondered throughout the demo if Ryu Hayabusa controlled with this much accuracy and precision. The game feels exactly the way it should – until it doesn’t because why quit messing with expectations now?  The silly Shopkeeper I mentioned before dispenses fun upgrades such as a Wingsuit (for gliding purposes – obvi) and a Rope Dart to grapple to surfaces. The Shopkeeper also has access to a Skill Tree – something that completely caught me off guard.

My time with The Messenger while short left me with a childish grin on my face. The demo ended with an over-the-top encounter with what appeared to a tall Lich Mage…which revealed itself to just be wearing a really long cape. For all intents and purposes, The Messenger is a 2D Ninja Gaiden love-letter designed to toy with your expectations with every shift of the screen. What begins as a clear homage to Tecmo’s iconic blue ninja quickly tosses the playbook out the window for a completely fresh experience altogether. It’s really obvious why Nintendo showcased this title in its booth; The Messenger is full of heart and its developers’ love for the genre is uniquely apparent.  I cannot wait to get my hands on the full experience when it is released end of Summer 2018.

The Messenger is also the winner of the DoublePlusGood Award which can be listened to in more detail here. Be sure to follow along with Sabotage Studio and The Messenger’s progress over at their homepage here.