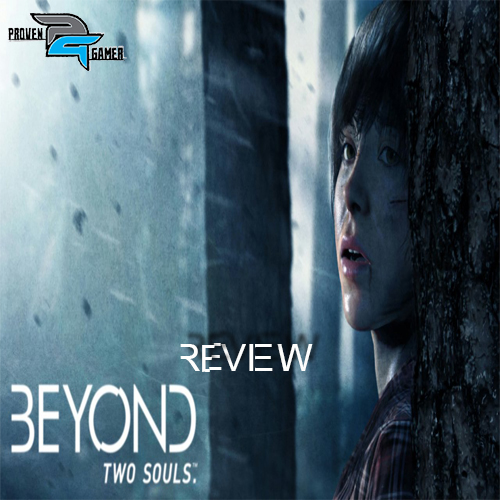 Quantic Dreams is at it again. The studio that brought you Heavy Rain and Indigo Prophecy developed another original story telling game called Beyond: Two Souls. As a fan of this developer’s previous titles, I regret to tell you that not only does Beyond not raise the bar; it almost lowers it.

In Beyond: Two Souls, you play the life of Jodie Holmes (played by Ellen Page) as she struggles to find her place in the world and the secrets of the next world. What makes this story stand out is Jodie’s spectral associate, known as Aiden, who is somehow linked to Jodie and causes more problems than solutions.

Throughout the gameplay, you have the ability to switch between Jodie and Aiden to solve puzzles, progress the storyline, and find out more information that Jodie can’t access on her own accord. This notion of gameplay promotes a new way of telling the story outside of the box, but Aiden’s gameplay is almost too easy. There is no real danger when playing with Aiden and all obstacles are almost too easy. Aiden’s easy play-through takes the fear and suspense out of the storyline and tends to eliminate the perils facing Jodie.

Speaking of playing through the game, the gameplay mechanics of Beyond seem watered down. In previous Quantic Dreams games (Indigo Prophecy and Heavy Rain) you had to press a series of different buttons in a required sequence giving you the urgency to get the right combo for proper story progression. The Beyond: Two Souls action sequence controls are changed to a simple control movement of the right analog stick. The function seems similar to a control scheme you would see in an iPhone/iPad game. Although this may cater to those mobile app gamers looking to get into console gaming, it leaves little challenge to gamers who enjoy a challenge.

With the newly action control mechanics, gamers may feel unsatisfied when running from dangers. If you’re not a fan of the new mechanics, you’re going to have a problem since the game is fluttered with action sequences in the majority of the game’s storytelling.

One thing to note about Beyond’s storytelling is the game plays like a Quentin Tarantino film. You play one chapter as Jodie in the CIA, the next chapter as Jodie as a little girl, then a teenage Jodie, and so on. It may provide great story telling, but it produces some annoying questions throughout certain scenes. You may look at a scene and ask, “Why did I see this now? This scene with the two characters doesn’t make sense from the previous scene.” It almost forces you to play the game twice in order to understand the plot of Beyond.

The plot has a tendency to feel linear. In Quantic Dreams’ previous title, failed events lead to a change in storyline and outcomes. Beyond: Two Souls focuses primarily on Jodie which means she is destined to go through certain unfortunate events. There was one chapter in which Jodie attended a birthday party and is locked into a closet. No matter how many ways you play the chapter, Jodie will always be locked in the closet. The only outcome you may have from this chapter is whether or not you want to walk away from these unpleasant party members (once you get out) or punish them for their actions. It is also important to note that neither of the decisions in the party chapter affects the storyline. This leads to little sense of accomplishment since the choice doesn’t really matter (unless you are a Trophy Whore and you want to Platinum the game ;-D).

The redeeming qualities of the game are performances by Ellen Page, William Dafoe and other actors/actresses involved. The storyline may lead to confusion in plot holes, but Ellen really brings Jodie to life and makes you feel sad for the character. You can’t help but feel tears coming on when you see her portray the hardships of Jodie. There are many scenes that will make you cry throughout the game the first time you see them.

The intense acting and gripping scenes may keep you involved in Beyond: Two Souls, but the other flaws will make you angry that you shoveled out $60 for this game. If you have never played Quantic Dreams’ previous games, Beyond is a decent game to try when it goes down in price. For those hardcore gamers, Beyond is a great game if you: receive it as a holiday gift, rent it, or buy it at a cheap price in the future.

My advice is to what until the game goes down in price. It is not worth getting today.