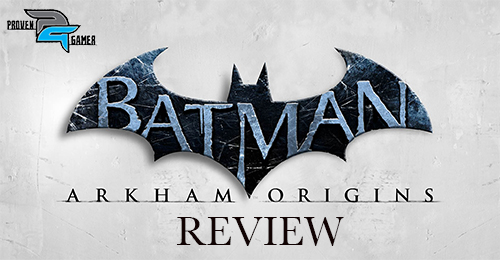 The Arkham series of Batman games has shown us a bunch of things. Batman can punch with a bomb on his fist without hurting his hand, Bane can withstand being pummeled by the Batmobile, A ripped up cape can still glide, and, most importantly, Batman games can actually be good. It pains me to say that Arkham Origins doesn’t quite measure up to its predecessors.

The story for this game is admittedly pretty good. You are two years into Bruce Wayne’s vigilante career, and you hear that Black Mask, a mob boss, is causing problems in Blackgate prison. Once he gets there and deals with Killer Croc, Batman learns that there is a price on his head with the world’s top assassins there to collect on it. This all swirls into one big connected story with the Joker making his debut as well as other familiar faces such as the Mad Hatter and the Penguin on one long crazy Christmas Eve.

The story of this game is definitely its high point. With early versions of characters, as well as a lot of interaction between Batman and Alfred, showing up in the story, it makes an entertaining and believable beginning story for Batman. The debut of the Joker was also awesome, without revealing spoilers. Speaking of the Joker, the voices, even though Mark Hamill was absent, were pretty spot on.

Unfortunately, the rest of the game lags behind. The area of the game is almost exactly the same as Arkham City. Most of the villains, gadgets, and henchmen styles are from the previous games as well. Very little of this game is novel to the series which is very disappointing, especially considering that the last two games brought such innovation with each release.

Batman: Arkham Asylum was a rebirth of Batman games and showed that good games can be made off of Batman. The gliding, gadgets, and changing landscapes of Arkham Asylum were groundbreaking. Above all else though, the combat system was and is like nothing else. Building on to this, Arkham City brought even more change. A different, huge map, many new villains, gadgets with new abilities, and a grand plotline to fit in all these new things were what the second game in the series brought to the table.

Arkham Origins sadly lacks this originality. Many of the gadgets are the same or perform the same functions. Admittedly, Arkham Origins is a lot more difficult than the previous games. The combat and bosses definitely became more complicated; however there is nothing to Batman’s style to really say changes were made to his combat. New henchman and boss dynamics seem to really be the only changes when it comes to combat. Many of the animations of batman seem to be literally cut and copied from previous games. It just feels like you are playing an adaption or DLC for Arkham City rather than playing a new game.

In all, it seems like the Batman: Arkham Origins was just… lacking. I was afraid that this may happen when it was said that Rocksteady Studios were not developing this game and it appears I was right. It’s not a terrible game in itself, but it is a disappointment in comparison to the rest of the series.