Who would’ve thought that Captain Toad would get his own game? After his first appearance in Mario Galaxy he has appeared in Mario 3D World where he would give the player a minigame in which he, Captain Toad, would go and collect Green stars. Now this minigame is a ingle player minigame and has some special features in where you cannot jump, then having to use one’s surroundings to help get through this puzzle like map and even having to turn the map around by either using the gyro on the gamepad or by using the stylus. The odd thing about this is that my friend and I were talking one day about Captain Toad having his own game and that we would both buy it. I’ll admit that the minigames were cool in how they designed them and I am looking forward to seeing how they actually do it. According to the video demo with some of the maps, this game looks like it will sell. Having to pay attention to two screens at once and needing to avoid danger, Captain Toad has a lot in store for him. 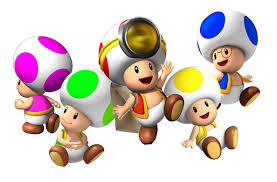 The actual game itself is pretty identical to the Mario 3D World minigames but is also significantly different. This time Toad is looking for diamonds and a Gold star at the end of the maps instead of Green stars, he can use turnips as weapons, and has a lot of new features with each map. The maps that I have seen on the E3 livestream were the Minecart, the Boo house, the Dragon escape and the meadows. Each of which showed off a new mechanic towards the gameplay. The Meadow showed off Shyguys chasing Toad as well as him using a turnip to defeat him, the Boo house level showed the intricate puzzle designs that require the stylus to move the door areas around reaching new areas, the Minecart area had him riding a minecart with the player using the gamepad to aim and shoot turnips in a first person view while the TV showed a third person view and the Dragon escape just showed auto scrolling and him climbing up ladders. I am looking forward to seeing what else they do with this game.
As to a release date, all they gave us was Holiday 2014. Personally I think this is alright but at the same time I think they could have given us a date since we are in the 6th month of the year already. Alas though, there really wasn’t much to say on the little guy except that this is a puzzle game that looks incredibly fun.