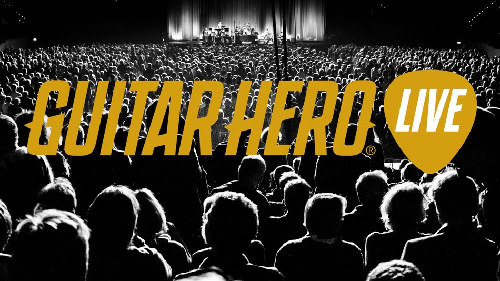 Remember that teaser video? Yeah, I called it. Guitar Hero is coming back. The new entry, Guitar Hero Live, is being published by Activision and developed by FreeStyleGames, who has worked on DJ Hero and its sequel. Activision mentions that Guitar Hero Live will be imagined for the modern era, introducing live-action audiences and band mates that react dynamically to how you play on stage, a 24-hour playable music video network, a completely redesigned guitar controller and support for your console and mobile devices.

Guitar Hero Live consists of two components – Guitar Hero Live, which has you living as a rock star with “vivid realism” and is shown in first-person as you join real bands and perform for real crowds, whether it the show is in a club or a music festival. You can get hyped before shows, close a set to a sold out venue and more.

Guitar Hero TV, or GHTV, is all about finding new music. You can start GHTV and play along with official music videos from a broad range of genres. You’ll be able to choose from artists such as The Black Keys, Fall Out Boy, My Chemical Romance, Gary Clark Jr., Green Day, Ed Sheeran, The War on Drugs, The Killers, Skrillex, The Rolling Stones, The Lumineers, Carrie Underwood, Pierce the Veil and Blitz Kids, with many more being announced in the coming months. GHTV is also a social experience, so you can compete among your friends for high scores in the same room or online, as well as completing challenges.

Most interestingly enough, Guitar Hero Live has a new controller. The new controller has been designed to feel more authentic and look the part. You have two rows of three buttons and is supposedly easier than ever to just pick up and play as well as allowing formation of chords and notes as you increase the difficulty. You’ll also be able to use the guitar controller on your tablet or smartphone, as Guitar Hero Live is the same experience both on mobile and console.

Guitar Hero Live is rocking its way to PlayStation 4, PlayStation 3, Xbox One, Xbox 360, Wii U and “select mobile devices” this Fall for $100. Now, if you just can’t wait, the Best Buy Theatre in New York City will allow fans to play the game from 6 PM ET to 9 PM ET today. If you can’t make it out, Guitar Hero Live will be heading to other locations later on in the week.

For more on Guitar Hero Live, be sure to check back each and every day here at Proven Gamer. Now go rock out!