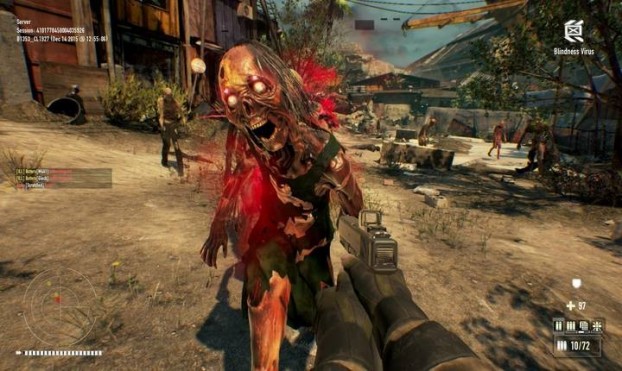 The Enemy of My Enemy

When I asked developer Psyop to give me a quick rundown of what i’d be getting into with their new shooter, Moving Hazard, they responded with a question; do you remember when The Governor stormed the prison in The Walking Dead? My short answer was, “hell yeah!” I may have had my fair share of issues with that zombie filled show, but that was one moment that delivered, and it reiterated that while man vs. man is the true drama of it all, zombies are an ever present danger, and that’s what their game is looking to explore. At first glance, Moving Hazard may look like another shooter looking to cash in on our waning obsession with the undead, but once you’re actually playing, it becomes a tactical war of attrition.

It’s impossible to ignore the direct comparisons to the highly popular zombie mode in Call of Duty. Once, the random addition at the tale end of World at War, zombie mode has become one of the more anticipated modes for the juggernaut franchise. So while the rest of the world may be growing tired of zombies, clearly there’s still an audience willing to pump boxes of bullets into reanimated corpses, but that’s where most of the similarities end. Zombies aren’t the focus of Moving Hazard. Instead, they represent a tool at your disposal, that if disrespected, will turn on you.

At PAX South, I was able to spend some time with Moving Hazard in a 2v2 competitive mode. There were 3 body types to choose from for my soldier; light, medium and heavy. Each with their own weapon sets, and each with their own sets of advantages. Light guys can move quickly, but their weapons do less damage for example. You can guess how the hierarchy works from there. The build I played was still pretty early, and I was told that the balancing was still being tweaked for other modes. One such tweak was that the lighter soldiers can attain perks that allow them to endlessly sprint, and at faster rates, essentially making them greased lightning with a blade, and almost unstoppable. Unless of course, your opponent sics a horde of zombies on you.

See, in Moving Hazard, the zombies are both your enemy and your weapon. While the map is littered with walkers, players are able to use various grenade types to distract, freeze, and enrage them. Bringing the tactical element into play. Depending on the game mode (ours was a king of the hill type), you can lure the zombies to a certain point of interest, and trap the enemy players. What makes this type of warfare interesting is that resources are limited. So spending all of your ammo shooting through an army of flesh eating freaks will leave your mags dry, and you without a viable way out. And since you only acquire points for killing human players, even if you do plow through, you’ll likely be more vulnerable by the end.

It’s still entirely too early to tell if Moving Hazard will be the indie darling of this year, but it presents enough of a fresh take on a tried and true formula that it’ll be worth checking out when it drops in March on Steam. The gameplay was tight, and fair for a game that’s still being tweaked, but that’s to be expected on the PAX South floor, where devs are trying to put their best foot forward. At this time, that shoe looked good. I left the booth wanting to play more, wanting to try different builds and strategies, which is what you want from any game; more. I’d keep an eye on this one.

What say you party people, are you sick of zombies, or does this look like just the right amount of undead action? Whatever your stance, for more from PAX South, keep it locked on Proven Gamer.