If you like caped crusaders and tomb-raiding badasses, then we have good news:  Tricky isn’t on this episode.  Tricky continues to sip margaritas by the community pool, as the Trophy Whores, Alex, Donny and Yield, run the show so deep into the ground that they’re liable to strike oil.  The Trophy Whores haven’t found black gold yet, but they’re rich in opinions that only a mother could love.

This week the Trophy Whores do their best swan dives into a pool of Batman and Tomb Raider news.  No Man’s Sky makes an appearance, too, for the second week in a row, but you might feel a little awkward and unprepared if you aren’t wearing a cape or dual-wielding pistols.  You might be MacGyver, but you can’t save Gotham or survive ancient tombs without the proper equipment, and Duct tape doesn’t meet every need.  I said it.

Join the Trophy Whores as they discuss, among other things, Batman: A Telltale Game Series, Rise of the Tomb Raider, Batman: Return to Arkham and No Man’s Sky.  Donny, as you might know, isn’t keen on developers spending their time remastering and remaking games.  Instead, he wants new intellectual properties and new ideas.  Donny memes have popped up on the Trophy Whores and Remember the Loot Facebook pages, and Proven Gamer would like to share the best one with you.  Take in the magnificence and majesty of Donny: 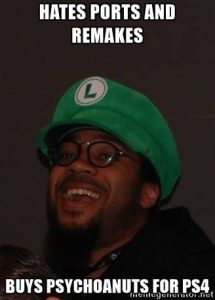 I would also like to point out that Tricky, who made this meme, spells as well as badger wearing oven mitts.  Psychonauts is the game.

If you wish, you can always download the show here – Trophy Whores 266 – No Man’s Remake