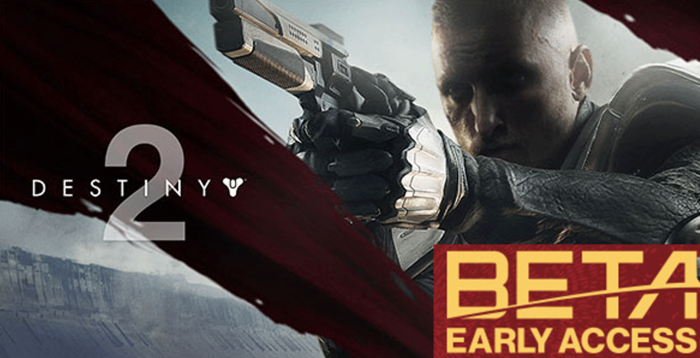 Since its release, Destiny has been one of the most polarizing titles in the industry. Hardcore fans swore that Destiny’s raids were well worth the grind while others damned its RNG heavy loot drops and progression system. While the base game never truly grabbed me, the initial beta back in 2014 had me amped. The gunplay was as tight as I’d expect from Bungie and the promise of a brand new universe to explore and learn about was too much to keep me (a lifelong Halo fanatic) away. What I found out when Destiny was finally released, and I’d made my way through it, was that Bungie may have shown a bit too much of its hand with the initial Beta.

In the months following Destiny’s release, myself and a host of others abandoned the game due to its extremely repetitive nature. The tone and cadence of, “We’ve Woken the Hive!!” is burned into our brains to this day. Trudging through the same areas over and over again became tedious, and the loot grind was a nightmare (RIP The Loot Cave). To Bungie’s credit, regardless of all the bad some of us saw, they hooked in tons of players for thousands of hours and created a fanbase as hardcore as the Halo players they had cultivated in the decade before.

As we come to the end of Destiny’s life cycle it is clear that Bungie learned a thing or two about what makes Destiny different from the gamut of other games on the market. They figured out how exactly to present this growing universe and gained a bit of knowledge about what makes its player base tick.

With all this in mind, I booted up the Destiny 2 beta Friday night and was greeted with an absolute spectacle of an opening mission. 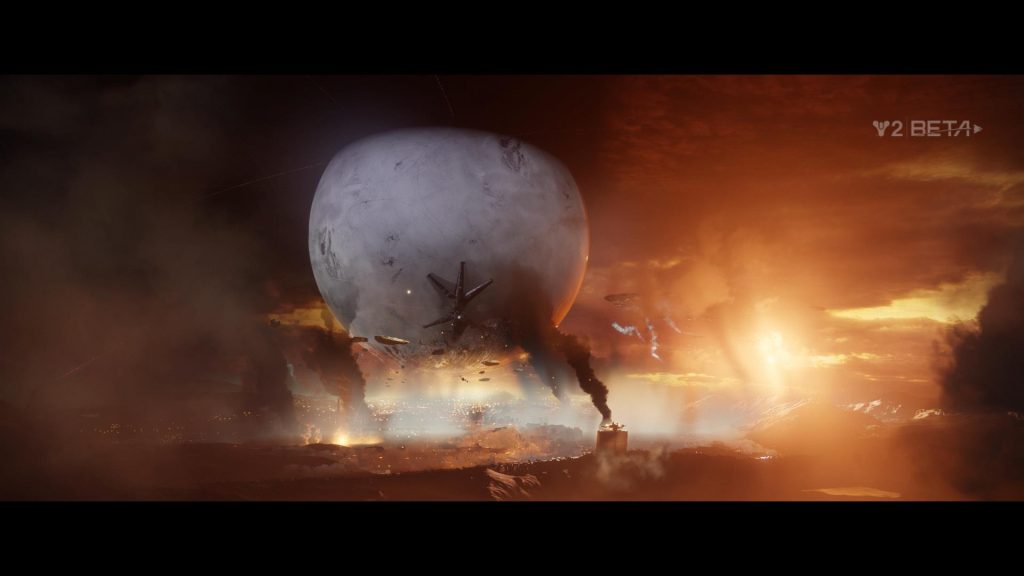 Homecoming, Destiny 2’s first mission, bleeds storytelling. The familiar faces of Cayde-6, Zavala, and Ikora Rey pushed me through the destruction of The Tower. What was once a home for all Guardians under the safety of The Traveler, has now been reduced to rubble as the forces of Emporer Ghaul sweep in to capture The Traveler’s Light. Flaming pods crash down from the sky unleashing waves upon waves of Cabal soldiers. Fighting these fearsome foes feels more varied this time around thanks to some new Cabal troops; The Gladiator, The Incedior, and the War Beast, all of which fill a new role in the Cabal roster. It also had me wondering what new troops may show up for The Fallen and Vex factions. 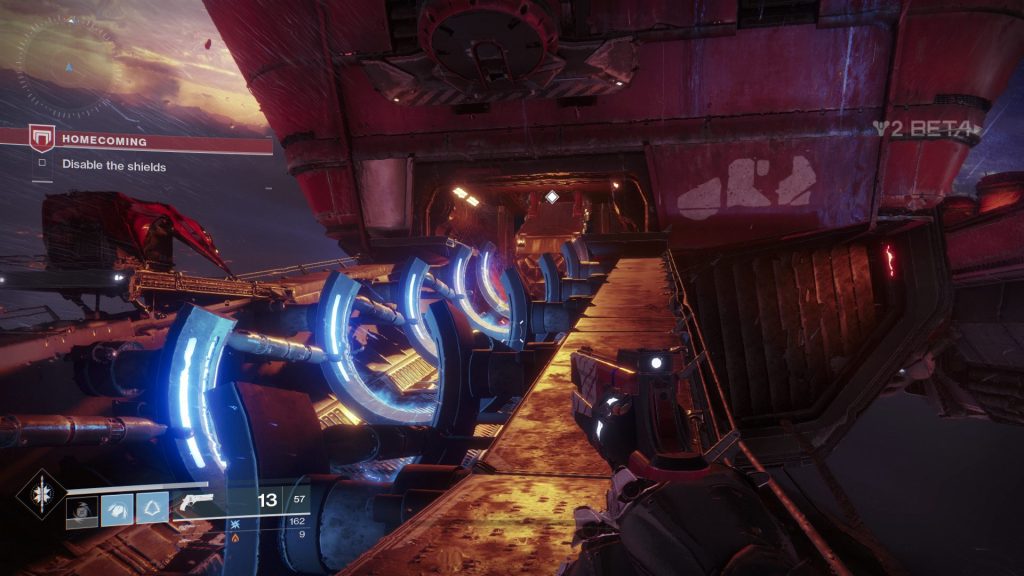 Unable to stop the onslaught of Cabal on The Tower I was taken onboard a Cabal command ship. The command ship is daunting and impressively massive. Upon landing, I saw pods of Cabal being launched off the back toward battle. The fights here and at the Tower are more frantic and engaging than I remember from the original Destiny.  After making my way through the ship and a few of the more beefy Cabal generals I finally come face to face with Ghaul. He laughs at how puny and weak I am as the massive machine that has attached itself to the Traveler seems to suck the light out of it and completely zap my powers. With my power gone, I’m helpless. Ghaul pitifully nudges me from the ledge of the ship with his foot claiming that The Light now belongs to him. 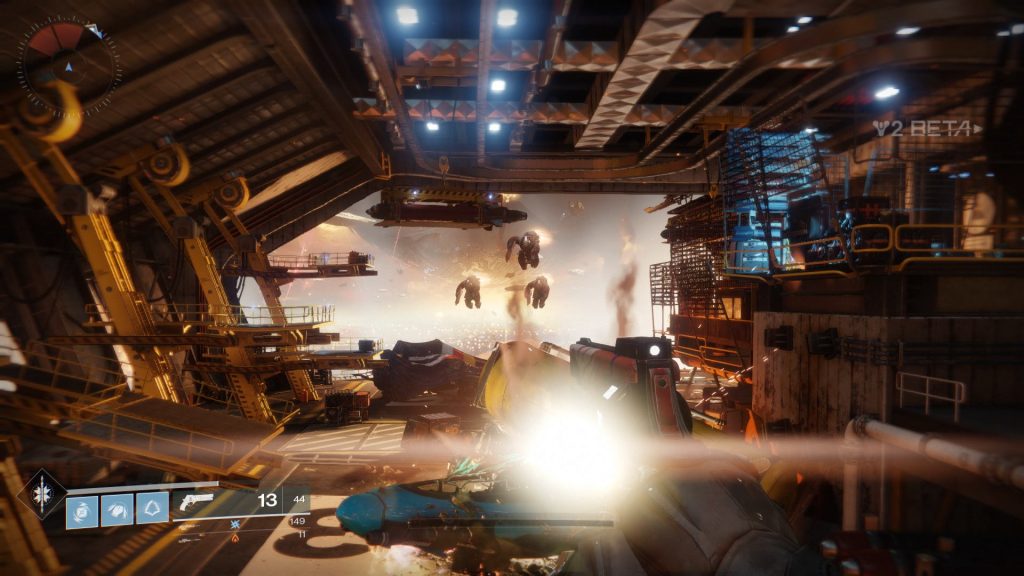 It’s immediately evident that Destiny 2 benefits from being developed for a single generation of console this time around, and maybe Bungie is finally giving us the story we deserve. Everything just looks and feels better; environments feel full and characters are more fleshed out from the get-go. The skybox is flooded ships swarming around the tower, far off battles being fought in the sky, and the sight of The Traveler being “captured” all make this mission as momentous as it should.

The Inverted Spire strike is the only other playable mission in the beta. I went into it excited to see what new mechanics Destiny 2 would throw at me and it delivered big time. Two other guardians and I are tasked with investigating why the Cabal have sent forces to Nessus, a new Vex controlled planet in Destiny 2. After blasting our way through both Vex and Cabal forces and jumping through some “Vex Milk Waterfalls” we find out the Cabal is trying to dig out The Mind from deep within the planet. Soon we find ourselves at the active dig site. Giant drills swirl around while the Cabal lie in wait protecting whatever it is they find deep in the dirt of Nessus. The gigantic drill arms dangerously swung by as my two cohorts and I fought our way downward. I found out the hard way that navigating through the deadly tornado the drill presents isn’t as easy as it looks. 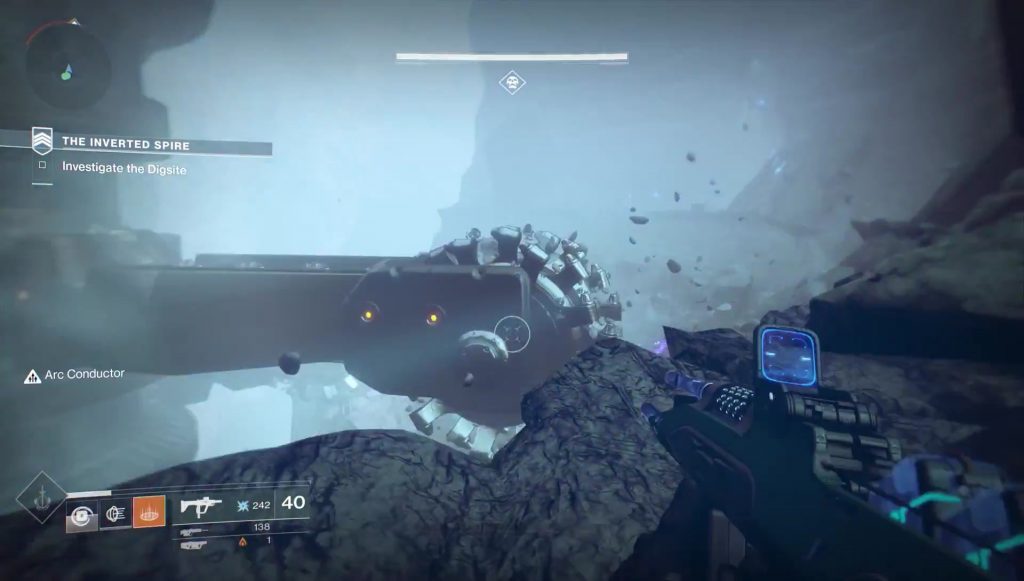 Finally making our way down we see exactly what the Cabal were digging for, Protheon; a huge Vex Minotaur. We start to chunk him down and fight off the supporting Vex forces when suddenly the floor disappears beneath our feet. We fall helplessly to the floor below and continue the battle. After a few rounds of Protheon throwing some new attacks at us and quelling the constant surge of vex troops, the floor again disappears beneath us and we descend to a third and final arena. A string of new attacks from Protheon begins. Vex milk surrounds the small circular pad we’re now fighting on and we’re being flung into it from all angles. Though the walk-able area of this new arena is quite small, the chamber itself is eerily enormous, and Vex seem to appear out of nowhere coming in from all sides. Protheon is visibly damaged in this last leg of the fight, which surprised me. It went from a hulking mass of electronics and metal to a broken down vessel more reminiscent of a broken terminator.

With a few final rounds of attacks, we take down Protheon, The modular mind, and make our way back to orbit. 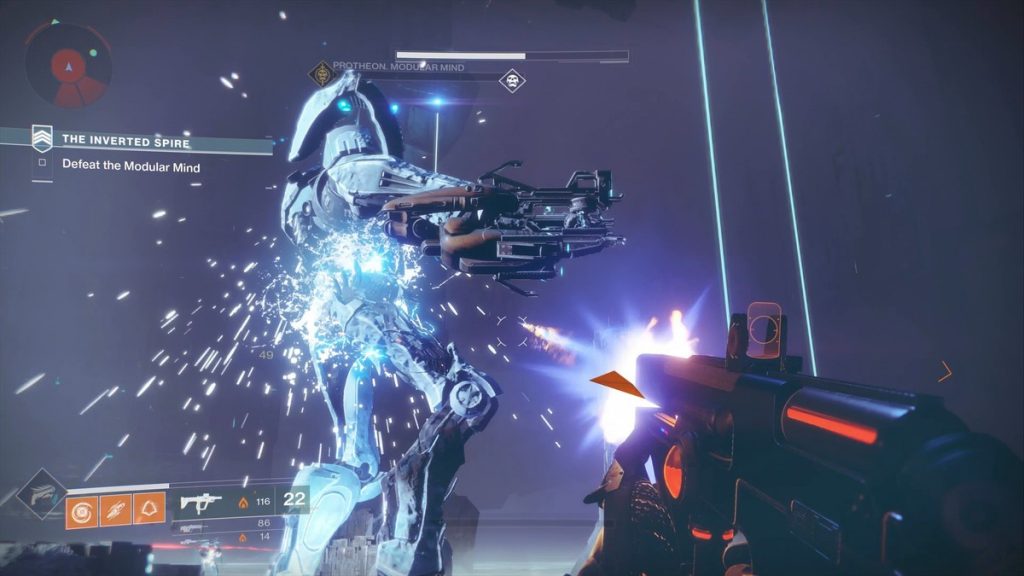 As I mentioned before, Destiny didn’t hook me but I did play through it and much later played though some of the DLC. The Inverted Spire and Homecoming felt so much more intense than anything I’ve played in Destiny before. Let’s hope that the rest of the game pans out just as well.

Ah, yes, PvP. The other half of the Destiny experience. Two modes are currently available in the beta. Classic Control makes its return and a new mode called Countdown, which plays similar to Call of Duty’s Seek and Destroy.  The first and most noticeable thing in both PvP modes is that the teams are comprised of 4 players each, scaled down from the 6v6 in the original Destiny. This is both a blessing and a curse. 4v4 feels more like home for Bungie and works well in the two maps for the respective modes: Endless Vale and Midtown. The downside to the downscaled team size is if a teammate drops out at any point, pulling out the win seems almost impossible. In a traditional deathmatch game type, I’m sure the extra player won’t matter as much, but in Control and Countdown every teammate matters. Maybe we’ll see enough outcry to at least get a 6v6 mode added, but for the time being, it seems Bungie is intent on keeping it at 4v4. 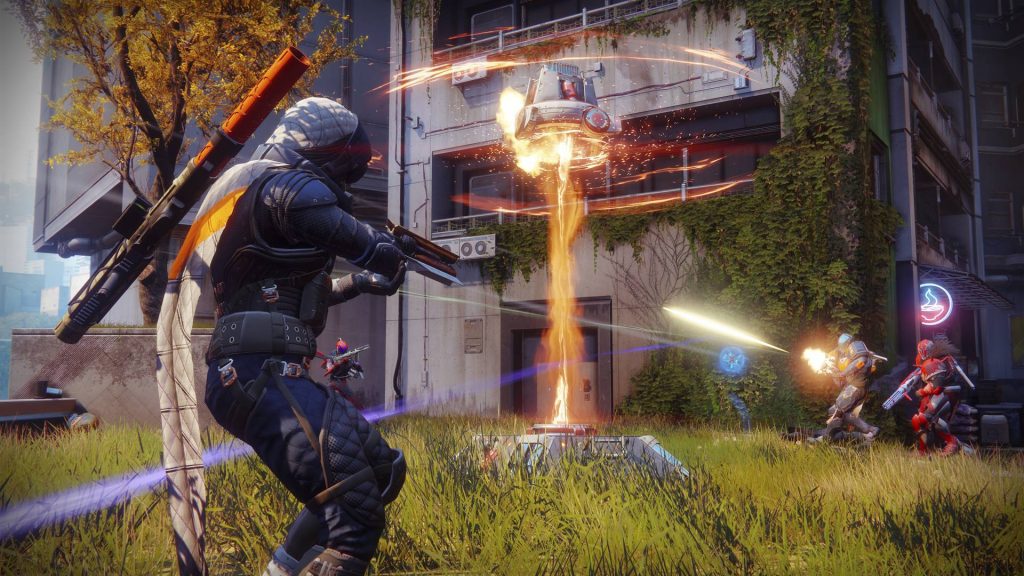 The maps mentioned above, Midtown and Endless Vale, are both pretty straightforward. Endless Vale, the Control map, is a relatively symmetrical map with A and C on opposite sides with many paths leading to B on a circular platform a bit set back in the middle of the map. It reminds me of a smaller version of Shores of Time from the original Destiny. The map design is full of great sight lines and lanes between flags, as you’d expect from Bungie. Neither side feels particularly imbalanced. I had a blast playing through it with different weapons figuring out what work best for different lines. It really brought me right back into the fold.

The second map, Midtown, is an asymmetrical map seemingly set in a town center or bazaar of some type. It’s different than any other map I’ve seen in destiny. Midtown is also host to the new mode Countdown. I’m not sure if the map is specific for this game type or not, but it was a blast either way.  Much like Call of Duty’s Seek and Destroy, one team attacks by trying to set off bombs while the other defends. Either side killing off every player on the other team will win the game. I found out pretty harshly that this mode requires quite a lot of strategy and that the run-and-gun lone wolf approach didn’t work so well; coordination and communication is absolutely key. I could easily see this mode being a favorite among the more hardcore PvP fans out there.

The Destiny 2 Beta is an odd beast. Comparing it to the beta for the original Destiny, you can see that Bungie doesn’t want to spoil too much of Destiny 2 too early. But does that mean that we’re in for more of the same or have they truly learned their lesson?

Playing through the beta missions a dozen or so times and putting some serious time into the PvP, I can’t help but feel like I want to see more; though there’s not as much to play through here. Bungie has me hooked again and I truly hope this time they deliver. The PvP feels as crisp as ever even though the teams are a bit leaner this time around. If the cinematic tone of the two missions is any indication, we’re in for one hell of a treat. With new worlds to explore, some new enemies to fight, and a new home there’s a lot to look forward too. But what I am most looking forward to is Bungie delivering on their initial promise with Destiny. I know they can build a universe like no other, and hopefully Destiny becomes just that.