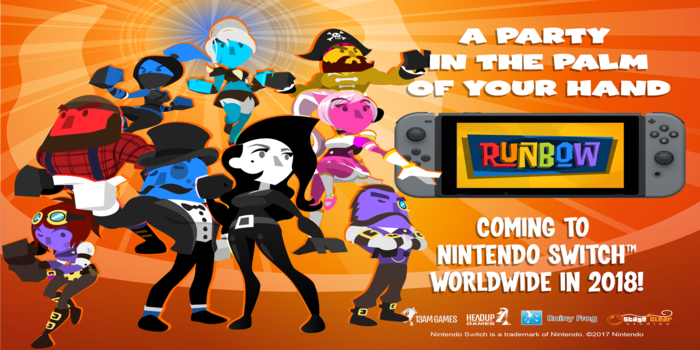 Düren, April 20th 2018 – The colorful racing chaos of award-winning party game Runbow will be postponed for some weeks in order to further optimize the game’s performance.Headup Games and 13AM Games deeply apologize to everyone who’s already looking forward excitedly to play it, but in order to feature the highest quality possible, Runbow needed to be delayed for PlayStation®Store and Nintendo eShop. But rest assured – it’s just a matter of weeks. You will get the newest date, as soon as it is set.The same may apply to the retail Runbow Deluxe Edition, due to the digital shift this date will probably shift back a bit as well. The Deluxe Edition will include all DLCs and nice physical goodies.

Proven Thoughts: Runbow is a chaotic mess of fun and could be one of the best couch co-op experiences on PS4 & Switch. With the Switch version boasting 8 player couch co-op I cannot WAIT to get my hands on that version.