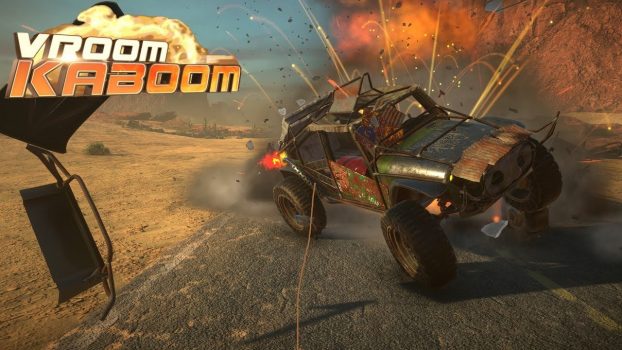 It’s been a long time coming since we had any vehicular combat games. When it comes to the genre on a PlayStation platform, the hottest memory players have is the legendary Twisted Metal franchise, which put players in a life-or-death competition involving tricked-out vehicles with cutting edge weapons. There hasn’t been a game of this type in quite some time, but Canada-based Ratloop Games looks to change that in a game that appears to be quite different from the traditional vehicular combat title. Imagine a racing game that combines the ability to control multiple vehicles in a tower-rush style gameplay mode with card battle mechanics. Welcome to Vroom Kabroom, and it is now available on the PlayStation 4.

VROOM KABROOM is an interesting hybrid experiment of combat racing, card battle systems, and the tower rush combat mode, as seen in mobile app games. The objective of the player is to use their combat vehicle to attack the enemy’s fortress, utilizing a strong deck and the ability to control several vehicles at any given time. Using real-time combat and tower defense mechanics, players will be participating in both offensive and defensive battle missions throughout their experience. Vroom Kabroom is an online experience, with players embarking on 1v1, 2v2, and 3v3 battle across several large stages. Players can also choose from several factions, each faction containing their own cards, vehicles, and skills to employ. Whoever can master these skills will be able to quickly dominate the battlefield and own the turf. Whether this becomes a big hit amongst gamers looking for a different online experience remains to be seen, as the game gathers its momentum from release today.

VROOM KABOOM is now available on the PlayStation Network.