Fast-paced “Bullet-Hell” shooters rarely provide incentive to keep playing after you’ve claimed the top of your respective friend’s leaderboard. The fundamental design of them suggests that you’re going to die, and you’re going to die a lot, but the only way to improve is to learn enemy patterns and try to make it further the next time around. And while Big Sky Infinity does mostly follow this template, it adds extensive RPG elements and a wide variety of game modes to make sure there’s probably something you haven’t tried yet at any given time.

Big Sky Infinity absolutely nails the single most important aspect of a fast-paced scrolling shooter—the gameplay. Its dual-stick shooting and consistently great framerate are crucial to the experience. The instant you start playing, you feel a great sense of control that a super smooth 60fps can allow. 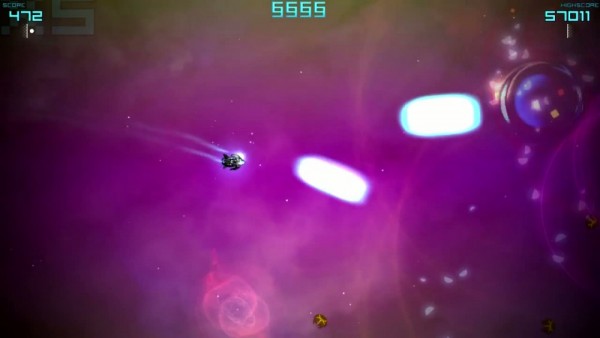 Big Sky Infinity doesn’t follow any story, and doesn’t have an end to it’s game modes. In reality, it shares more DNA with something like Dark Souls than anything. You’ll be briefed with a short tutorial on learn controls, but after that, the game just doesn’t do much to explain itself. This forces players to play a multitude of times before you know how different elements of the world play out—the random black holes, slow-motion acid trips, and perplexing bosses that you’ll surely die from more than once before you know how to hurt them. And like Dark Souls, death often comes with a new lesson—and frustration. But that’s why Big Sky Infinity’s upgrade system exists. In Classic mode, you’ll be building up Starbits after every run that you can use to upgrade a number of aspects of your ship—like shot radius, shields, reload time on heavy laser, ship speed, and many others. The way you can simply dump thousands of points into upgrades at regular intervals is strangely satisfying.

But while these upgrades are addicting to obtain, it can often be hard to see how your improvements are helping your session when the game is as opaque as it is. You feel like you just sorta have to trust the constant point-dumping is actually helping. Bosses will appear randomly during a session, each one requiring a different strategy to defeat. And once defeated you continue on your run, so you’ll often run into more than one in the same game. While each boss is challenging and varied, there are only four of them, so expect to be see the same one many times. I eventually became so accustomed to the way each boss behaved, they ceased to be a challenge. 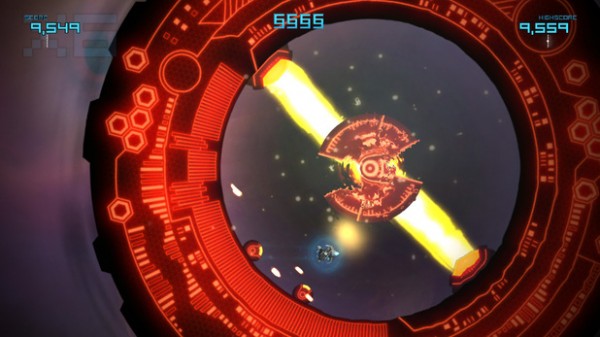 But probably the best argument for Big Sky Infinity is it’s asynchronous multiplayer mode found in the Vita version of the game, which is essentially a classic game of HORSE. First, one players sets the rules of the game, sets his score in that mode, sends a message to the opponent, who then plays that mode and tries to beat that score. If you don’t beat the score, you get an H. If you do beat it, the other guy gets an H. But you don’t only have to play for score—I can set the mode to be Pacifism, so you can’t shoot and can only dodge. Then I can also set it to be a game of distance, kills, Starbits, and more. Score notifications work very well, because they’re handled through the Vita’s messaging app. The message received will take you directly into the game, ready to play. And since the message is reading minimal amounts of data, you can receive and accept challenges over 3G. It’s an intelligent system that makes excellent use of the Vita’s strengths. But unfortunately, this mode is completely absent from the PS3 version of the game. In the place of it, is a four-player local multiplayer mode. This is fine, but doesn’t compare in quality to the HORSE mode.

Big Sky Infinity is a salute to the bullet-hell shooters of old that melds its seizure-inducing visuals and kick*ss soundtrack exceptionally well. Even better is its myriad of game modes, each one evoking a different skill. Upgradable skills found in Classic mode assure that you won’t max them out quickly, though they don’t always seem to help with all of the randomness. While buying the PS3 version gives you the Vita version for free, the multiplayer HORSE mode found in the Vita version is the most enjoyable part of the game, and led me to almost exclusively playing that version. For ten bucks, it’s kinda hard to go wrong with Big Sky Infinity.