Super Crate Box was and forever will be an excellent mobile game. The extremely short rounds make the game easy to play in short spurts, exactly what most people want in a mobile game. There was only one thing missing though: actual button and analog controls. That’s what the Playstation Mobile Vita version of this game brings.

The game is basically a 2D side-scroller, but enclosed. You play as a little guy running around the 4 different areas in the game. The main goals are to dodge the enemies and collect the boxes. Each box supplies you with a new gun, from pistols to miniguns to laser rifles. You must use these guns, because if an enemy reaches the bottom, he comes back red, angry, and twice as fast. All the while there are tons of enemies streaming out of the top of the stage. This results in very crazy, frenetic gameplay that makes the rounds only about thirty seconds long. 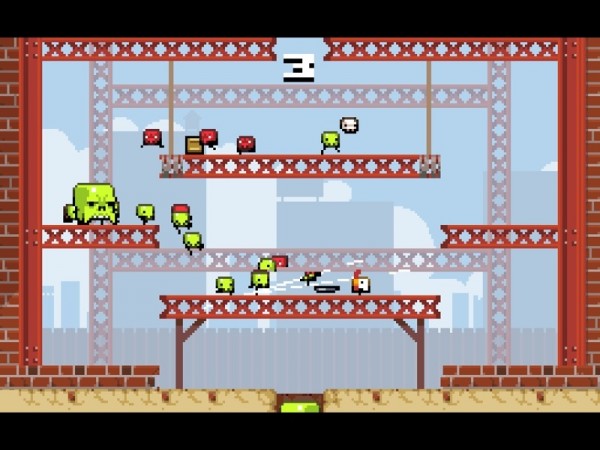 There are 3 different stages all offering something new. The enemies go a different way. There are new characters and weapons to unlock, and new colors and stage layouts. The game is able to do all this, while still maintaining the fun gameplay that keeps us coming back for more.

I’ll admit it now. I’m obsessed with the stats screen. It gives me information on how long I’ve obsessed over this awesome game (too long), how many total crates I’ve collected, how many times I’ve killed and died from every enemy, and all of my unlocks. This is great for people like me who constantly like to check their stats. 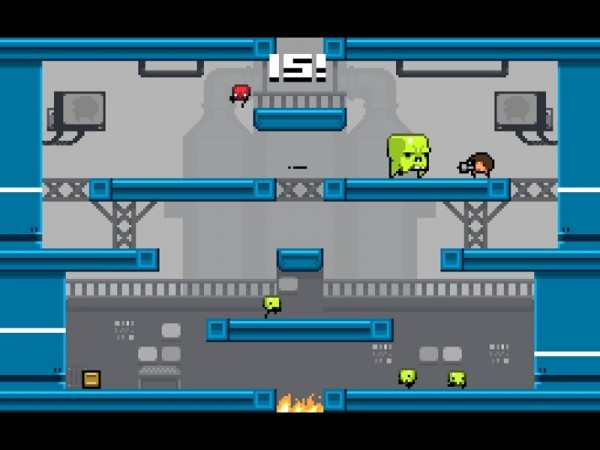 There is an exciting, upbeat 8-bit audio track for each stage that is exciting and fun at first, but after 30 seconds it seems like it is looping over and over. This sadly makes the audio go bland after couple minutes and then starts to become flat out annoying. I like the soundtrack I just wish there could be more, so that I’m not hearing the same thing over and over again every thirty seconds. Similarly, the gun noises sound very good at first, but after hearing that pistol blast 1,000 times, it will get annoying. The game’s art style is the wonderful pixel-art style we all know and love. The shape and polish to every detail in the game from the character models, to the bullet shapes, to the guns is superb. Even the extra character models you can collect have amazing and creative shapes and sizes.

This is an addictive, enjoyable game that you can pay for once and get on all your Android devices and your Vita. The Vita one is the one that improves it, adding button and analog controls. The soundtrack is good, but repetitive and the graphics are awesome. The game is only $3.49, making it almost impossible to pass up.