Many tower defense game seem simple and laid out. They tend to follow a basic formula in terms of gameplay. Build defenses, upgrade your forces, and watch the enemy walks into a gauntlet of defensive attacks. My initial mindset was, “If you played one tower defense game, you played them all.”
McDroid takes a bit of a different approach to the tower defense genre. Your character, a spider-like droid, lands on a planet after a long journey in space. When you land, ship informs you the planet is overrun by indigenous lifeforms. It is up to you to eradicate the wildlife and colonize the planet.
The game starts off rather simple with you moving across simple level and a helpful tutorial. You collect strawberries and other minerals, you return the strawberries to your spaceship, use the strawberries and other items to build laser turrets or make upgrades, maintain the turrets as waves of enemy creatures attack your spaceship. 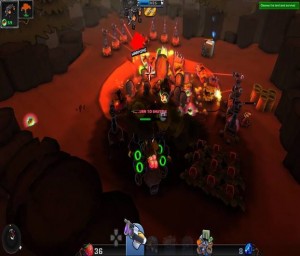 If you are expecting to shoot or attack any creatures on your own, that concept doesn’t apply in this game. You main function is to build, harvest, plant crops or tress, and repair. The game is fun and simple at first, but the challenges and difficulty increase in no time. While you may think you have everything set up for a level or challenge, you quickly discover your muti-tasking abilities are going to be your strongest sill in game progression. I had every turret built, multiple mines ready for a wave of enemies, and though I could sit back and watch. I soon discovered my turrets were falling fast and I needed to make quick repairs or build replacement turrets.
That challenge is only the tip of the iceberg in terms of challenge difficulty. As you go up in levels so does your world. The levels get larger and multiple sites/objectives will be required for level completion. I looked at one level that had four different sections and I thought, “How am I going to beat this level?”
After a couple of hours, I discovered McDroid follows a much different path style from other tower defense games. The 360 degree control of the camera view give a much better depth to the game where most tower defense games have been stuck in over the top view.
Time management, running back and forth, and multi-tasking are essential skills for McDroid. You will run around a board building and upgrading defenses, moving items all throughout the board, planting and harvesting materials for currency, and terraforming the land. There is a lot that can be done in one level leaving you emerged in the environment. After a couple of hours, I was hooked on the game. 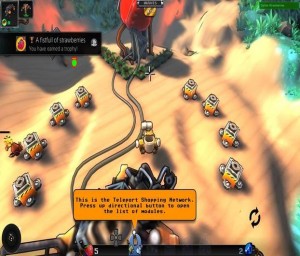 While I found the game-play amusing, I wasn’t too keen on the music for the game. The music appears to be a rock guitar playing while obliterate alien life. While it was a different change, I didn’t think it was my cup of tea. You may think differently after hearing it, but I didn’t enjoy the music.
The game offers online co-op play which decreases the difficulty factor when multiple player are working on different parts of the map. The game doesn’t seem to scale the difficulty based on the number of players in a level. This could be good if you are tuck on a level or bad if you want a different challenge with other players.
McDroid is a fun game for gamers to play, but will require you to strategize and plan your moves. The game may look odd at first because you are collecting strawberries to convert them into turrets, but those thoughts quickly subside when you are racing to build, repair, and repel.
PROVEN GAMER SCORE 8/10