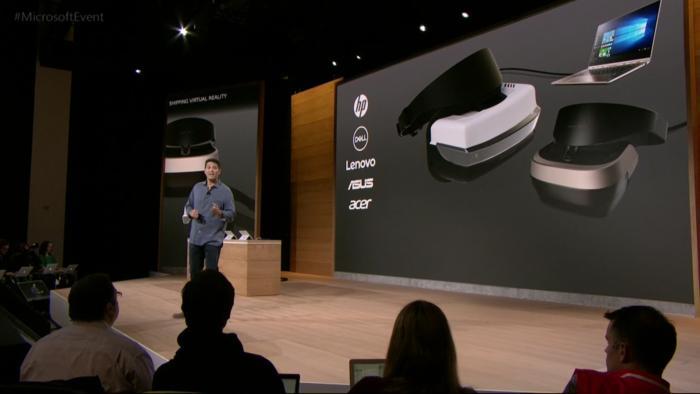 Microsoft’s partners will ship a new line of virtual reality headsets to take advantage of Windows 10’s VR and holographic capabilities. At today’s event, Microsoft said that the headsets will start at $299 and will include inside-out tracking sensors, obviating the need for external cameras or laser systems like those on the current Oculus Rift or HTC Vive. HP, Dell, Lenovo, Asus, and Acer are all listed as partners.
Following Microsoft’s announcement, Eyetouch Reality and Digi-Capital Founder/CEO Tim Merel said, “Microsoft’s new VR headset is the next stage of VR going mass consumer. For consumers, inside-out tracking without the need to buy or set up external sensors in a dedicated VR playroom is huge. The $299 price point is much less expensive than other PC based VR products. Launching with partners HP, Dell, Lenovo, Asus, and Acer gives Microsoft an accelerated hardware platform and also spreads its market risk.

However the greatest potential for the Microsoft VR headset could come from bundling it with Xbox One Project Scorpio, which Microsoft has already highlighted as supporting next generation VR. With a Xbox One installed based over 20 million users, this might be Microsoft’s silver bullet for both VR specifically and the console market more generally. So Microsoft could be using its new VR headset to leapfrog competitors in two markets at the same time, leveraging for VR some of the great work already done by Phil Spencer, Alex Kipman and Kudo Tsunoda with Windows 10 and HoloLens in the adjacent AR market.”

If this bold move pays off, Microsoft could easily have a leg up on its competition and give PSVR a run for it’s
money.