Shadow of the Colossus, originally released in 2005, was a landmark game.  The realization of an incredible and enthralling concept, Shadow of the Colossus brought players to a mysterious land filled with large mythical beasts that were key to the resurrection of a young woman.

At the Electronic Entertainment Expo, Sony Interactive Entertainment’s Japan Studio surprised everyone and revealed that Shadow the Colossus was being rebuilt for the PlayStation 4.  As if you need to be told, the game looks gorgeous.  Shadow of the Colossus shines brightly in the “games are art” discussion, and, as you might expect, makes a strong argument that throws support into overdrive.

You need to play Shadow of the Colossus. I leave no wiggle room in that discussion. Would you spend your entire life refusing to eat one stack of pancakes or a single doughnut? If so, you need to flip that script and take that “can’t do” attitude to Krispy Kreme or IHOP.

In Shadow of the Colossus, Fumito Ueda and Team ICO told a story fraught with intrigue, excitement, danger and uncertainty. Your character, Wander, driven by love and hope, has a purpose and a quest, and while you are aboard initially, as the game unfolds, you become increasingly anxious about the consequences of your actions. As you kill each colossus, the music plays a somber tune, and you ask a frightening and saddening question: “What am I doing?” 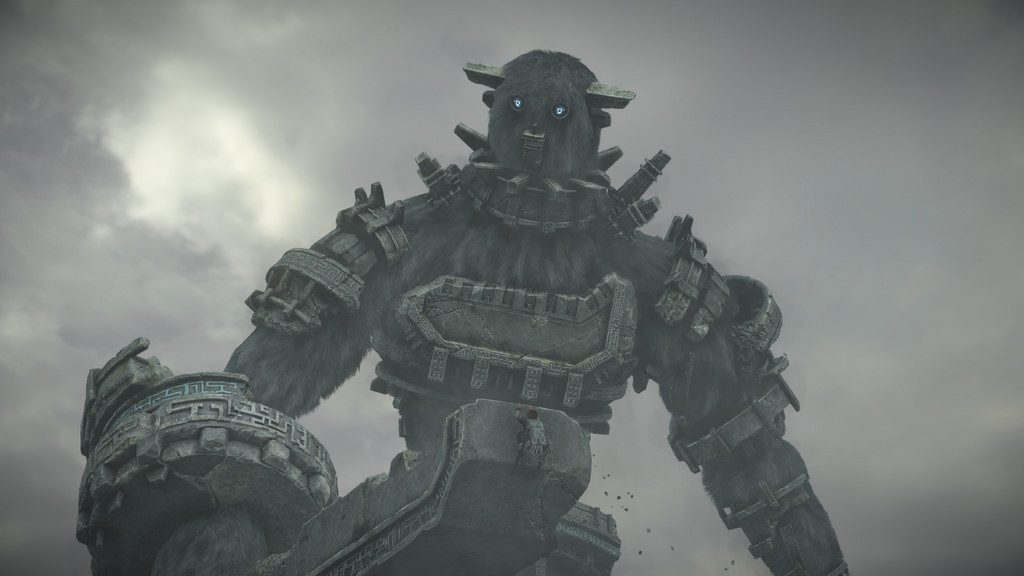 The soundtrack is amazingly poignant, chilling and evocative. What’s more, the music has purpose. Each song sets the tone for every scene — and every moment. If you’re on top of a colossus, then the creators ensure that you feel the reckless excitement and precarious nature of your situation. You experience an array of emotions while playing Shadow of the Colossus, and the music evokes each gasp and every yelp.

As Wander, trying to save the woman whom you love, you have to find and slay 16 awe-inspiring colossi that tower over trees like armored, lumbering skyscrapers. The colossi shake the ground as they walk. If you dare, imagine standing under the Stay Puft Marshmallow Man, climbing onto one of his feet, scampering up one of his legs, struggling up his torso and neck, and stabbing the vulnerable spot on the top of his head — tucked so obviously beneath his adorable sailor hat.  For any sane person, it’s a terrifying proposition.

Each colossus is a puzzle, so, much like the boxers in Nintendo’s Punch-Out!! series, you have to figure out how to expose the beast’s weak points. While a game comprising only boss fights might seem liable to disappoint, the towering beasts in Shadow of the Colossus go far beyond traditional boss fights. If you think that you’re going to kill a colossus by jumping on its head three times, then you have earned a hard, hard lesson: The colossi don’t play around.  While some colossi seem docile, at least initially, others will try to smash you into paste as soon as they see you.  As you might expect, the closer that you get to a colossus, the more guarded it becomes.  Once you unsheath your sword, you’ve tossed your cards on the table, and the colossus goes into survival mode.

Sony, as well as other game companies, have garnered heat from some gamers by re-releasing games on newer consoles; however, the PS4 version of Shadow of the Colossus isn’t a remaster, and it’s one of the greatest video games of either past or present. If you haven’t played Shadow of the Colossus, which, for me, sits behind only The Legend of Zelda: Ocarina of Time, then you have the opportunity to play the definitive version.  I implore you not to miss the opportunity.

Shadow of the Colossus transcends video games.  It’s imaginative art.  It’s brilliant storytelling.  It’s a beautiful experience that evokes every emotion and leaves you with a heavy heart.  And yet, somehow, you recognize that the journey has been magnificent.