The hardcore, action-RPG genre, which was overwhelmingly put on the map by the Dark Souls franchise, is recognizable by a few key mechanics. Cryptic story, open areas filled with secrets, item and weapon upgrades, respawning enemies, and, above all else, brutal and challenging combat have put this style of game on the map. However, the common thread with most of these games is the focus on melee combat. Immortal: Unchained, an upcoming game from Toadman Interactive, is attempting to put a new spin on this genre. They have taken take the tried and true elements of the action-RPG, but have built it around a third-person shooter. Although the visuals weren’t great, and it was a little rough around the edges, I think there may be something special in the works with this new take on a familiar franchise.

The story of Immortal: Unchained is vague, to say the least. It is set in a futuristic, rundown, sci-fi world. I took control of a nameless character who has been woken up and released from an eternal prison. He is given one task: go out and save the nine worlds from destruction. However, the character has no idea who he is, how he woke up, where he came from, or why the nine worlds are in danger. One thing that has always held me back from the stories of Dark Souls and Bloodborne, is that I have never had a huge interest in the aesthetic of the world. However, with Immortal, I was immediately captivated, due to to the sci-fi setting. 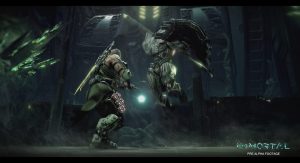 Once the demo started, the familiarity to the Dark Souls franchise immediately became apparent. There were three meters to manage, health, stamina, and special weapon energy. My character was equipped with an assault rifle, shotgun, and sword. Along with my weapons, items were also available to me such as explosives, health potions, and stat buffs. These were changed using left and right on the d-pad. Stations, which are the equivalent of campfires, were used to increase my characters stats and upgrade weapons and armor. These stat increases came from collecting the game’s form of currency by taking down enemies. Anytime I died, and died quite a bit, any currency I had collected would be lost, but could be recovered by going back to the same spot in the level.

The design of the level also felt familiar. It was an open area, which branching paths, and different places to go. With no map to reference, learning the connectedness of the area was crucial. As I explored the space, things started to feel more connected. At one point, I was able to kick down a ladder to reach an area that was not attainable without first finding the ladder.

Where Immortal: Unchained separates itself from similar games is when the combat starts. All other hardcore action-RPG’s have primarily focused on managing your stamina and health through melee combat. However, being a third-person shooter, Immortal takes spacing, and enemy management in a whole new direction. The dodge roll is still your best defensive option. However, unlike a melee combat game, rolling is the only thing I was able to find that uses stamina. The roll is still used to avoid incoming attacks, but since you are being shot at with a gun, I found myself rolling behind cover and using it to stay at a distance instead of finding my way behind enemies for melee attacks. Enemies used cover, tried flank me, and used large yellow energy shields to constantly keep me moving and on my toes. 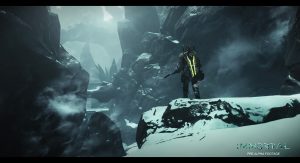 The gun play of Immortal: Unchained felt great. The left trigger was used lock onto enemies. From there, flicking the right stick allowed me to target different body parts. This became important since some enemies would have armor or shields, protecting them from direct fire. The boss fight further enhanced the mechanic. I found myself up against what was essentially a mechanical knight with a shield and a lance. Due to the size of his shield, there was only one part in the front of him that I could target. Hitting this spot didn’t do much damage though. The key to the fight was to find a way behind him to shoot a glowing red power core. However, this proved to be much easier said than done. The knight kept me in front of him using the reach of his lance while mixing in a beam attack that came from his shield.

If there is one critique I have for Immortal: Unchained, the game didn’t look great. There was a blandness to the world, which was even more noticeable due to the amount of snow in the level. The demo did also drop some frames and chug a bit in certain situations. However, it is still very early in development, so, hopefully, the team making the game has time to smooth those things out.

If Immortal: Unchained can successfully take the hardcore action-RPG genre and turn it into a shooter, I think it has the potential to be something special. The game is set to release on PC, PlayStation 4, and PC. At this time, there is no release date other than 2018. For more information on the game click here.