I admit, when I began my initial play-through of Toki Tori 2 +, my first thought was: why can’t I jump? – I’m a freakin’ bird! And why do I waddle so slowly?! But the more time I spent with the adorable puzzle platformer, the more captivated by it I became.

Toki Tori 2+ is a puzzle game through-and-through, and it is your job to guide an adventurous chick from one side of the screen. You do so with very simple and limited controls. The ‘B’ Button allows you to perform a Stomp Technique (who knew chicks were so hefty) while the ‘A’ Button activates a Chirp. The pitch of your Chirp is determined by how hard you press the button down, so light types produce a soft melody while a long press results in something a bit louder. Combinations of light and hard presses generates a song; think of it as a simpler version of an ocarina (and if you don’t get that reference, why are you playing video games?). Both of these tools are used to solve puzzles which are, as I stated before, essentially what the game is all about. 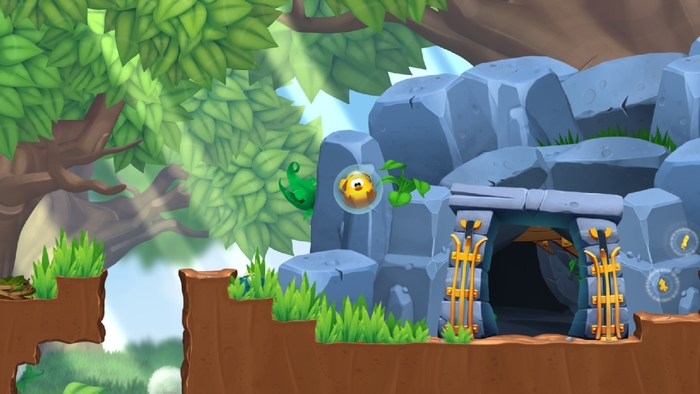 For the most part, Toki Tori 2+’s puzzles involve interacting with the on-screen flora and fauna of the environment. As your movement is very limited, you will have to rely on the various creatures of the world to get by. Sometimes that involves stomping on the ground to force creatures away from you. Other times it involves feeding them a bug which causes them to burp up a bubble for you to be encased in and hover to your next destination…cause video game logic, I guess. And other times it can be as simple as a flying bird snatching you with its claws and carrying you to your next platform. Sounds simple enough, right? But when you put all these elements together, that’s when things can get a bit tricky.

On the onset, Toki Tori 2+ does a wonderful job of lulling you into a false sense of security. It’s charming and unassuming exterior aside, the puzzles begin quite simple enough – perhaps even mind-numbingly so. But as you progress, the more you begin to realize that there is an evil force at play here the escalation in difficulty (and frustration) increases astronomically. There are moments where it feels as if you are keeping track of just too many things at once: okay, I have to lure that bug over here to feed that frog but I also have to make sure all these lobsters in crates shuffle in the right direction…and so forth and so on. It can get a tad overwhelming, and more often than not, you’ll fail and  have to repeat the entire process over from the beginning. It’s this sort of trial and error format that rob you of that ‘a-ha!’ moment and make the proceedings more like a chore. 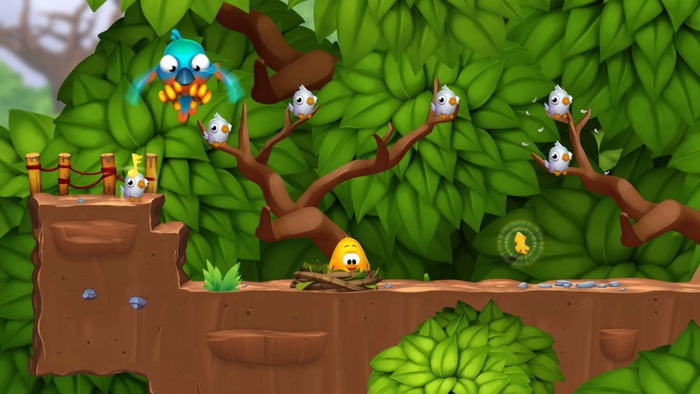 Fortunately, the game’s adorable aesthetic and simple, hum-worthy soundtrack lighten up the mood enough to keep frustration to a minimum. That coupled with a new checkpoint song (which I have read was not earlier versions of this title), which allows you to place a checkpoint wherever you like, reduces aggravation tremendously. Sure, it doesn’t take away from trial and error aspect I spoke of before, but it does let you set yourself up in a nice place should you fail a puzzle over and over again.

Overall, Toki Tori 2+ on Switch is fiendishly deceptive title which wears a cute little mask to hide its cruel intentions. The difficulty of some puzzles may be a bit much for novice puzzle game players, and certainly isn’t the type of game that is for everyone. But if you are willing to forgive a few minor grievances, you will find a strangely satisfying title to help pass the time between the next big budget release.