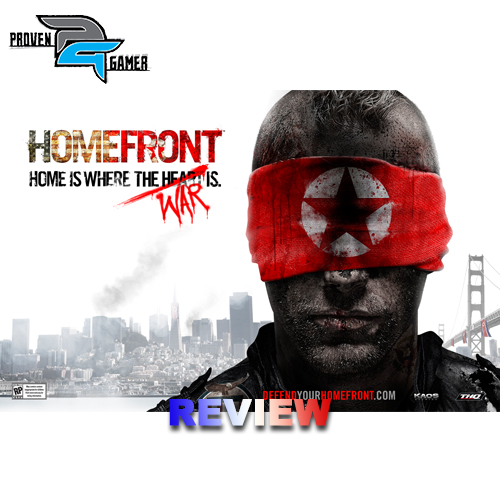 When you look at Homefront, for the first time, you see a Call of Duty type of game with a powerful and promising concept. A story written by the same person that wrote Red Dawn and Apocalypse Now can really peak your interest, like it did with me. Unfortunately that is a fundamental flaw with this first person shooter.

After that, the story takes a turn for the worst. Each level consist of two moments: the moment where you are fighting for the liberation of America and the moments that interrupt the fight to listen to dialogue or background that you may not want to hear about.
One level won’t let you progress until you traveled around the entire resistance base listening to every aspect of the base. The first play through was an intriguing insight into this universe, but I’d rather not waste time (on my second play through) traveling through 10 minutes of dialogue just to pick up the gun and fight for the resistance.
These moment, aren’t set at just the beginning of the levels. After getting used to some shooting and level progression, you are interrupted with more conversations and dialogue. Breaking up battle with character dialogue is great and creates dept in your game, but only if you’ve been locked in battling endless enemies after an 1 ½ hour (not every 10 minutes).

Half way through the game, you discover a good portion of the story and characters are recycled from the Red Dawn and Apocalypse Now films. There’s the tough head strong fighter, the reluctant resistance member that becomes traitor, the scene where things appear to be turning well for the resistance only to find out the tables have turned, even a “WOLVERINES“ banner hinted from Red Dawn. All these scenes are revised or different interpretations of the two films. At certain moments, I felt like this game should have been called Red Dawn (but they probably couldn’t for copyright purposes).

Only until the last level do you feel the excitement of the game truly pick up, but abrupt ending and open ended voice dialogue made me wonder What was the point of the last level? What was at stake for me? Did I save the day in this game?

For those gamers that look forward to multiplayer aspect of shooters, Homefront actually delivers a fun time. The player has the ability to call in vehicles (humvees, tanks, and helicopters), the maps are hug (which is great for sniping and all the vehicles you can have in the level), and combat is nicely done.

There are the basic character classes (light gunner, tactician, heavy gunner, sniper, engineer, infantry.) which allows you to modify their abilities as you unlock them (through level progression). An interesting feature of the multiplayer is how you can call in you special abilities. When you collect points (through frags, controlling checkpoints, or achieving kill streaks), you can use these point to call in you abilities. This is a rather unique and helpful way of turning the online war zones without having to worry about getting 3-5 kill streaks in a game. A player can be killed dozens of time in a game and still have the ability to call in a tank drone or a hellfire strike.

Homefront is a game for all those multiplayer fans that are looking for a fun Call of Duty atmosphere game. Unfortunately that is the only redeeming quality of the game. If you’re looking for a rich original single player story, there are other options available.