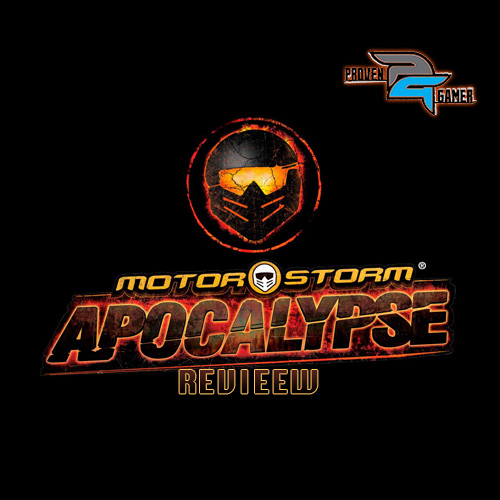 If you have played the previous entries in the Motorstorm franchise, you’ll know what to expect. Motorstorm is a high octane arcade racer with amazing vistas and incredible action. The main section of the game is dedicated to a story mode. It tells the tale of three racers that you get to play throughout the races. You start off as Mash, a rookie new to Motorstorm looking to make a name for himself. As you progress through the story, players then get the chance to play as Tyler, the Pro, and Big Dog, the Veteran of Motorstorm. The story of these three racers is told through a series of motion comics between each race, albeit very thinly. Watching through each motion comic will give a better insight into the characters motivations for racing although I felt I just wanted to race.

From the moment I had my super-car turning through a tight chicane, with debris scattered across the broken up road I knew this game was going to deliver something special. The natural disasters have cut up the erratic self-made raceways creating chaos and more importantly fun. The settings are excellent. One track you are driving over is on the top of falling skyscrapers. Another, “Mainline” sends the vehicles darting though train stations and underground tracks. The developers have managed to create tracks that are exciting with a great sense of speed. Whether it be because of the narrow track or the sheer amount of objects across the tracks, I had to be completely focused on the track to avoid crashing into the first obstacle in my way. And yes, be prepared to crash a lot. It’s a great credit to the game that no many how many times I crashed, I still had a great time racing.

There is a choice to how you race and can alter how well the vehicle responds to the terrain. Dirt Bikes are better through rougher paths while the Super-bike will love the freeway. The same is said for the cars such as the Super-car, rally car, ATV, racing truck or even a Monster Truck. Choosing the monster truck may seem like the slow option, but it is also the easiest to crush fellow racers. When you come side to side with another vehicle, a simple press of a button will allow you to ram and possibly wreck their vehicle with extreme satisfaction. On a bike  alongside another bike  you will see your character try to punch the other racer off.

The excitement of Motorstorm is not over when you complete the story mode. The madness can also be taken online. Faster, more intense seems to be the main course served here. Competing with up to 16 other Motorstormers makes the racing far more chaotic and despite everything going on, there is very little to no lag experienced. I was very surprised to see how fluid the races were although I did notice some anomalies. For whatever reason I did experience sudden and unexplained crashing of the vehicle. I could be driving in the middle of a clear road when all of a sudden my car would reset on the track as if I had just crashed. It also happened when going over “small bumps” in the road yet the same vehicle would go over bigger cracks with ease. These glitches were very rare though and never affected my enjoyment of the game. I felt it was worth mentioning as I did meet other gamers who said they had experienced the same “once or twice”.

Although everybody should be drawn to the game for racing, the developers felt the need to add collectable cards into the tracks. There is 150 of these to collect with approximately 3-5 cards per race. Some are straight forward, whereas others are hidden or are only available after a change in the track. The purpose for these could be put down to the gamer exploring the different paths on every track. In my opinion, they aren’t needed and only serve as a distraction to the frantic action.

There is very little to dislike when thinking about Motorstorm: Apocalypse. Evolution Studios have crafted a great arcade racer full of action with great detail thrown in to all the tracks. For those looking for a racing simulator I strongly suggest looking somewhere else. Everybody looking for a fast chaotic racer should be preparing to jump right in. I myself, have been very impressed by this game and look forward with eager eyes into what Evolution studios construct next.

I give Motorstorm Apocalypse thumbs up for our ProvenGamer fans.