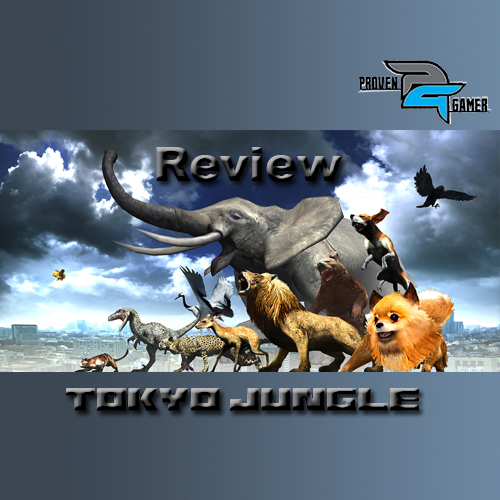 Tokyo Jungle sets out to do a very specific thing, and does it very well. It’s very much a Japanese game, and doesn’t care who knows it. Unlike some recent Japanese games that try to cater to every Western audience in its design, Tokyo Jungle embraces its insane premise and capitalizes on it with great controls and tight combat that makes for a one-of-a-kind experience; managing to be a ton of fun, at least for a while.

I suppose the closest thing to which one can compare Tokyo Jungle is a Roguelike, meaning that you’ll be attempting to survive in the post-apocalyptic Tokyo as long as possible until you die, where you then repeat the process with a new carrot dangling in front of your head to keep you going. That’s the draw of Tokyo Jungle and other games like it: ever subsequent playthrough has its own contained adventure, with its own story, crazy moments, and lessons—especially lessons.

As is appropriate in the animal kingdom, you’ll start at the bottom of the food in chain in Tokyo Jungle. With the Pomeranian as your first animal, you’ll learn the essential rules of Tokyo Jungle, and how the world turns around you. You have a life, hunger, and stamina gauge. As a carnivore, killing and eating other animals frequently is paramount to keeping your hunger down. On the other hand you can be an herbivore, like a deer, who relies on randomly generated plants around the world for food, and must frequently run away predators, leaving you practically defenseless. Your animal can only live for 15 years, so marking your territory, finding a mate, and having children to continue your journey is necessary. Transitioning generations comes with a few perks, like inheriting beneficial stats from your parents and having siblings that act as additional lives if you die.

Apart from your initial goal of staying alive, you also have a myriad of objectives to complete. Objectives are organized into three-part chunks, and the next set is introduced as the years go by. You might be asked to intake a certain amount of calories (gained by consuming animals or plants), make your way to a certain part of Tokyo, or transition generations before 20 years have passed. The objectives differ from animal to animal, though they don’t differentiate enough to stay interesting the 11th time through. This inevitable monotony is accelerated by the fact that you’re spawned into the same exact spot ever time, no matter what. But what never gets old is unlocking a new animal to play with, which is good, because there are a TON of them to unlock ranging from defenseless rabbits to almighty dinosaurs.

Because unlocking the next animal became the only thing I was interested in after a while, I found myself purposely killing myself after I unlocked it. There just isn’t enough incentive to attempt to live for 60 years; bar from getting a trophy or climbing the Leaderboards.

A majority of animals play more or less the same, though there are some obvious variations like speed or how quickly you burn calories. As you climb up the food chain, you’ll begin to feel much more comfortable challenging larger and more numerous animals, especially underground where things can get fierce quickly.

Apart from the prominent Survival mode I’ve touched on thus far, there is also a story mode to sift through, though it is more like a collection of smaller scale missions that focus on specific objectives. Each one contains a small self-contained story of an animal. These missions aren’t bad, but more boring than anything. It’s also kind of odd that these missions teach fundamental mechanics of the game even though the only way to unlock these missions is through playing several hours of Survival. Needless to say the meat and potatoes of Tokyo Jungle lies in the Survival mode, while the story is meant as a simple distraction.

Tokyo Jungle doesn’t set out to please any certain audience, and holds true to the old Japanese ideal of making weird games that haven’t been done before. Though the base gameplay is simple, it executes on its few mechanics very well and provides a Rouguelike gameplay loop that makes you still want to fight for that next animal even after your 15th run. It feels really good to be excited about a Japanese game nowadays, and Tokyo Jungle is definitely worth checking if you’re the least bit curious.