Nun Attack is one crazy game. In short, you take a group of nuns who happen to have shotguns and assault rifles to different graveyards to try to take down Mortana, the Fallen Nun. You go through 40 levels, spanning across four worlds. These levels have players running through them, destroying portals, and killing enemies at their flagged points. You can level up the nuns, and level up their guns with the in-game currency. Crazy, right?

The levels are all basically the same. You tap, drag, and release your finger to direct the nuns where to go. All the while, there are portals firing flying skulls at you. Each portal has a different skull, and a different way to destroy/block the projectiles. You destroy those portals by destroying the skull near it, which can be quite difficult and annoying in some levels. There are also flags in each level, each one starting a combat sequence. In these, the camera pans in, and you are given access to your weapons. You then move around every nun separately, the same way you do in the non-combat parts. To attack, you drag your nun’s cursor over to an enemy, and she will attack automatically. This was a problem at times, because the nuns would group up, and I wasn’t able to specify which enemies they were to attack. Some nuns would just stand there, and do nothing. After that, I would just keep swiping randomly, and lose the tactical feel of the game. 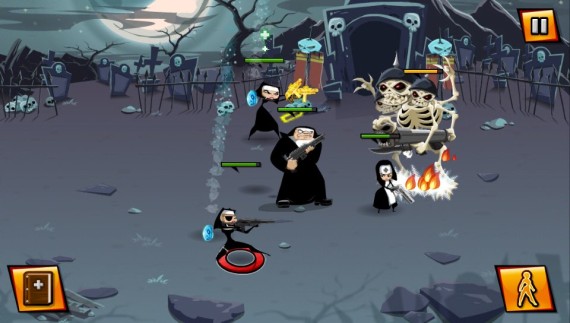 You can’t have a game this weird without powers and miracles, right? Each nun has a special power that can be used in the battles for support. They are all  important, as you must use them if you wish to succeed in battle. The other form of powers was the miracles. These could be used at any time in the level, and are activated by drawing out a symbol in the miracles screen. These could be used for attack and support. Even though I didn’t use these as much, both are cool features, and are necessary to battles, and the game as a whole.

The boss fights are easy for the most part, just a larger version of the most common enemy in the world you are in, with advanced attacks. But, the last boss made me want to throw my Vita across the room. Let me just tell you now, that I have EVERY nun up to level 15 (the highest) and the best guns for every nun upgraded to the max. Even still, I couldn’t get the last boss under half health. There is a serious balancing issue or something, and it needs to be patched. Badly.

Speaking of the upgrades, the system is actually pretty cool. You can upgrade the nuns just by defeating enemies, and finishing levels. But, each nun has four guns which are found in golden chests in some of the levels. Each gun has 4 upgrade levels, which improves their fire rate, damage rate, etc. It can also change a bonus effect the gun has, such as poison, or burning. The upgrades are all good, but they still won’t help you beat that dreadful final boss. 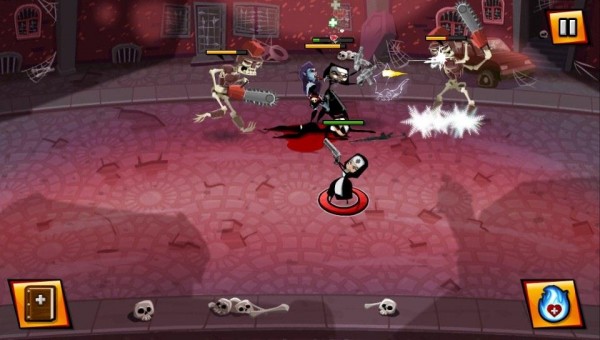 Everything else about the game is all pretty good as well. The menus are easy to navigate, and have a lot of color, making them nice to look at. The art styles along with the menus are pleasing, but in-game, everything seems to look flat. The music doesn’t play a huge role, but isn’t very good. It’s got kind of a jazzy soundtrack, and doesn’t seem to fit right with the game.

Overall, even with my gripes about the game, Nun Attack is pretty fun. It has a good combat system, cool powers, and a good way to upgrade you weapons. The games problems (such as the hard final boss fight) don’t completely ruin the good parts. I suggest you buy Nun Attack, you will have some fun with it.