Guacamelee is “Juan” heck of a game. Drinkbox has done it again, and brought another great PSN game on to the PlayStation consoles. Guacamelee! captures the humor, art, and musical style that all of their previous games have brought. The game also has wonderful platforming elements, a great combat system, and a really good story. It has all the elements a game needs to be a great game, but Guacamelee! has a lot more than just those.

The game starts off introducing you to the main character, Juan. He is a farm boy from Pueblucho, a town that greatly respects luchadors. Juan goes to help out a man when El Presidente’s daughter is caught in a fire. Juan rushes over, only to find a skeleton by the name of Calaca, has captured her. Juan tries to fight back, but sadly, Calaca kills Juan. In the world of the dead, Juan finds a mysterious luchador mask. He then progresses out of the world of the dead, and obviously, tries to save El Presidente’s daughter from Calaca. This makes for an interesting plot line throughout the game, and is not just a complement to the excellent gameplay that comes along with it. 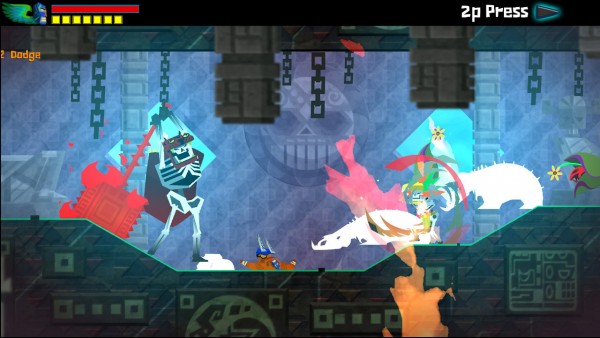 Speaking of that gameplay, it is arguably one of the best platformers I have ever played. Why it is, is because it actually makes you think, and it can actually become quite difficult. At some points, I had to pull off crazy combos to get to the next platform, and after I had completed them, I felt like a luchador myself. The platforms are laid out perfectly, and I never had a problem with something being impossible or too hard to pass. As the great Goldilocks once said, “It was just right.”

Juan can also beat up baddies along the way. The excellent combat system makes that super fun. Juan can pull off awesome combos, in both the air, and on the ground. It’s fluid, and it just feels right in place with how everything else in the game works. Along with just his punches and kicks, Juan also learns some mystical attacks from a goat-man. These can be used to break objects in the environment or when battling enemies. These have great, funny names attached to them like the Rooster Uppercut, and my absolute favorite, The Dashing Derp-Derp. I just love how the combat works, and it just feels right for the game. 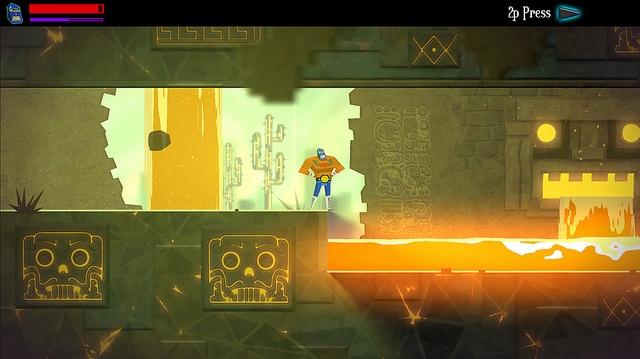 The enemies won’t cause you too many problems (in the normal mode that is), but the bosses will kick your butt over and over again. These bosses will take you many, many times to figure out. Their attack patterns are all so diverse, and finding out how to stop them is even harder. Eventually, when you do figure them out, it feels awesome, and like I said before, like a real luchador.

My only real problem was that the game was a bit too short. My first time through clocked in at 4 hours, and 4 minutes. I didn’t go out of my way for collectibles, or do any of the side-missions on that run-through. However, if you were to play on hard, the game lasts longer (you will have to re-do more parts), or if you did look for collectibles and do the side missions. If you did any of those things, the game could last you 10-20+ hours. Still, I wish there was a little more content to it, even though I really enjoyed what it had. 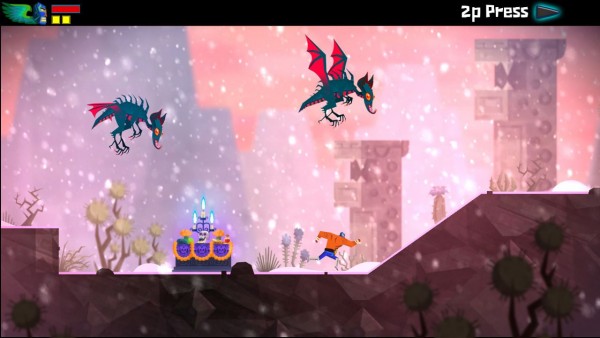 Humor is where Drinkbox excels the most. There are references to so many things you wouldn’t believe. On the billboards, there are ads for “Mega Hombre”, “Casa Crashers” and even an ad in Spanish for their last Vita title, Tales from Space Mutant Blobs Attack. There are also funny references to other things outside of games, like the meme, Grumpy Cat, or the movie Wreck it Ralph (they put “Bust it Bill”). All of these were hilarious, and the character dialogue and gameplay has even more references and jokes. Guacamelee! had me laughing the entire game.

The art and music are great as well, and fit with the overall aesthetic of the game. The art has a 2D beautiful surface in the front, and some kind of background that pertains to the kind of environment you are in. Like for example, the desert scene has sand dunes in the back. The game looks beautiful on both my TV, and my PlayStation Vita’s 5 inch display. The music is an upbeat, Mexican style. It fits wonderfully, and sounds especially nice when coming through headphones.

Guacamelee! is an all-around awesome game, and anyone with a Vita and/or a PlayStation 3 should pick it up. It’s one of the greatest platformers that I’ve played in a while, and it has all the elements a game needs to be great; awesome gameplay, great soundtrack, good graphics, and a fun story. Guacamelee’s got it all. It doesn’t matter if you’re broke, or don’t have any money, you need to buy Guacamelee. Believe the hype, it’s really that good.