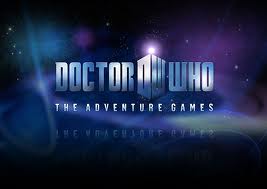 As a big Whovian myself, I can happily say that the Doctor Who Adventure Games will satisfy any hunger for content, that any lover of the Doctor might be having lately.

The game has been out for a while, in an episodic format, but all of the episodes have now been bundled in one purchasable game on Steam. Matt Smith, along with other actors from the TV show, all lend their voices to this game. It does come off as hocky at certain moments in the game, but for the most part I really enjoyed hearing the actual Doctor’s voice while playing, and not some double.

The gameplay is in Third Person, with a majority of the gameplay consisting of Puzzles and walking/running, with a lot of Stealth sections in between them. However, the controls do not quite go hand in hand with the sneaking parts, since the keyboard/mouse set up is a bit Wibbly Wobbly, and doesn’t really work in the way they set it up. It’s not game breaking, but it does a bit frustrating.

When it comes to the story, I’m going to keep it short and sweet, without giving any spoilers, or even a summary, since as Whovians know, Dr. Who is a ride best enjoyed in suprise. The Doctor Who Adventure Games is a typical Dr. Who Adventure, which makes a lot of sense, since that’s what the game is called. The 11th Doctor goes on crazy time traveling adventures in the TARDIS, along with Amy,Rory, and River tagging along for the ride.

The visuals are quite stylized, which is fitting, since it is an adaption of a live action Television show. The music and sound effects are all taken from the show (for the most part), so your ears are certainly in for a treat. As stated above though, the voice acting can be a bit campy, and it sometimes broke my immersion.

Overall, if you’re a bit Doctor Who fan, such as myself, you’ll absolutely love this game, especially if you’re one of the sad souls who had to experience The Eternity Clock game. After playing such a terrible game like that, It was so relieving to wash my pallet with this game. I highly recommend this game to Whovians; but If you’ve never watched the show before, go watch the show before trying this game out, or you will be absolutely lost and confused the entire time.