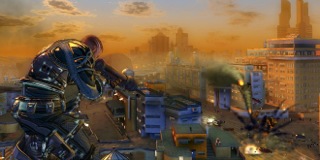 Microsoft announced during its E3 press conference that there is a new Crackdown game on the horizon for Xbox One.

According to Phil Spencer, the head of Xbox, Microsoft has the “right team” in place to develop the title, although the studio has yet to be announced.  Yet, he did reveal that Dave Jones, who worked on the original Crackdown title, would be leading the team.

Until further details are revealed, all we know is that the new Crackdown will have a co-op campaign, online multiplayer, and it will retain the stylized graphics that the franchise is known for.  Furthermore, a teaser trailer also revealed that the game will feature destructible environments.