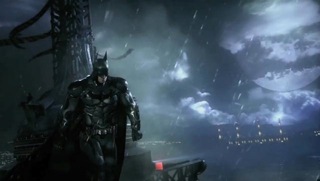 Sony’s press conference had some heavy hitters, but one of the more popular games, gauging off of the huge applause that was given by the crowd, Batman: Arkham Knight easily exuded new-gen luster.  The video begins with The Bat making a breathtaking exit from the top of a tower, showcasing a draw distance that easily topples anything from the previous Arkham entries.

After Batman’s hunt for Penguin seems to be coming to its climax, the screen crashes and a close-up of Scarecrow reveals a haunting design.  “How many more bones would you crush,” Scarecrow says. “How many lives will you destroy in pursuit of what you call justice? You are the product of everything you fear: violence, darkness, helplessness.”

After the video concluded, Andrew House, president and group chief executive officer of Sony Computer Entertainment America, added that the Scarecrow missions are exclusive to Playstation.

Batman: Arkham Knight was delayed to 2015 for Playstation 4, Windows PC and Xbox One.