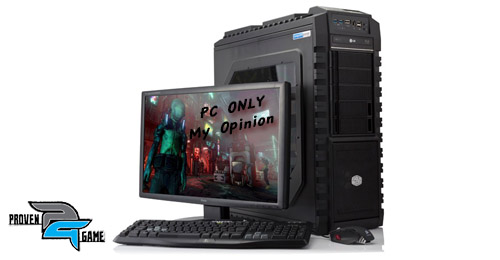 If you’re a gamer, you can’t read an article about a video game without some PC “master race” fanboy coming in and talking about how that game would look so much better on his or her PC. While they may be annoying to hear, they are right. Just about any game on a high end PC will look better than its console equivalent. But when people say that we are heading towards a PC only future, I generally tell them to slow their roll. As I go through my points I’ll be doing a quick little tally of benefits for the console and benefits for the PC to help prove this point.

Unless you are a MOBA, MMO, or strategy game, multiplayer tends to perform better on a console compared to a PC. Of course there are always exceptions to the rule, just look at the population of Call of Duty on a console to that of the PC, the numbers are staggering. Additionally, good luck playing couch co-op on a PC. While you can, you might as well get a console unless you want 4 people crowded around a computer desk. A console can both play online and give the fun experience of couch co-op. Chalk one up for the console.

While PC’s can run games more efficiently, they have their downsides. Sure, you can run that game on Ultra settings, and you may be able to for a while, but eventually you’ll have to lower the settings or spend $200 on an upgrade that allows you to do it. The nice thing about consoles is you never have to worry about that. Games on a console or optimized for that console, and thus more convenient for you. Quite honestly, while some games look great on PC compared to others (Crysis) most of the time they don’t look all that different in comparison. PC gets one for efficiency while the console gets one for convenience.

Indie games are the PC’s second biggest benefit. Indies are great. They deliver something that most AAA fail to do as of late, deliver a unique experience. While the PS4 has been putting quite a few indie titles on PSN, nothing can compare to the PC’s lineup of Indie titles. There is no if, and, or but to this statement. PC gets a point.

Well what about the games? Well, that is a subject that is entirely based on the person. Do you like MMO’s? PC is probably a better choice. Do you like fighters? Well console is more than likely the way to go. So both console and PC get a point for this one.

For the readers at home who have been keeping score, the console has three points, and the PC has three points. Each system has its benefit and each has its short coming. This doesn’t make one better than the other. I believe that consoles will become more like PCs as time goes on (hell, they’re pretty close already) but I don’t believe that consoles will ever truly be gone. The separation is good for the consumers and good for the industry. Just like it’s a good thing that there are multiple consoles. It gives people choices so there is something for everyone. Each gaming outlet has its own theme. PC is more strategy and independently driven, Microsoft is more sports and action, Nintendo is more quirky, fun, and loving games, and Sony has more serious single player stories. Each has its niche and that’s a-okay.