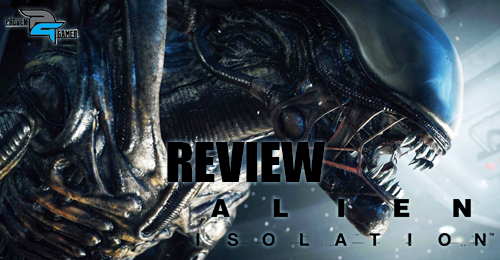 Do you remember Aliens Colonial Marines? The alien game that destroyed every fans dream from a good alien game. Well, we now have the alien game that fans have been wanting and waiting for Alien Isolation, delivers the scares and will make fans happy. Have you ever wondered what Amada Ripley did while she was looking for her mother? Well now you have your answer with this game.

The game starts off and you are invited to go to the Sevastopool space station to recover the Nostromo flight recorder and find out what happened to her mother. Since this is an alien game you know that things aren’t as they seem especially since Amanda works for Weyland Yutani. So when you finally get aboard the station you at first believe that the station is empty but are soon greeted by a survivor who tells you about the creature and how everyone is looking out for themselves. You hear a lot about the alien, but never see it for a while, that does not mean the first few hours are boring. They build the atmosphere in the game and it builds beautifully, you are genuinely on the edge of your seat afraid that the alien might pop out at any time. This portion of the game serves as the tutorial and to build the atmosphere and it does a great job.

When the Alien makes it appearance it’s a great scene with the alien dropping out of the air vent while you use a computer and your character of course cowers under the table. While you are hiding the tail comes down and you just stare at it, hoping that the alien does not notice you before it leaves in search of prey. After which you enter a hospital area where you really get your first look at an alien, as it drops down again from a vent and hunts for you. This is the best part of the game hiding from the alien while it searches for you. The Alien AI is random and will constantly surprise you. Because of how smart it is you can’t study its movements and have to learn its patrol pattern. You just have to be smart and most importantly be very cautious. The reason why I love these sections of the game is because I’m never calm and always very tense and anxious. On the PS4 version of this game, there’s a feature that allows the sounds you make in your play room that will alert the enemies in the game to your presence and location. I like this feature because it makes me so cautious, because if I make noise or have friends over I’m probably going to die, and shriek as well.

Even with all these great sections you do get weapons and can craft items that will help you along the way. You get a revolver, shotgun, flamethrower and a bolt gun to help you dispatch the hostile survivors on the station as well as the rudimentary working Joe androids on the station. The crafting is simple and useful at times but the combat to be honest isn’t fun. The androids are hard to kill and most of the time you have to kill them to continue on your merry way. This in turn eats up your supplies and items that you scavenged for hours to find. I wouldn’t mind this so much, if you could just avoid them or sneak around them However, 90 percent of the time you need to fight them and it gets annoying and repetitive and worst of all boring. There is a chunk of this game that becomes boring because that’s all you do and as I said it before, it’s just not fun. With a game that does this so much, it’s sad to see them drop the ball on a big chunk of the game. However this part of the game does do one thing right, it makes you believe you’re safe and there’s no more danger. You could not be more wrong as the games pulls up its socks and goes back to doing what it does best, making me shriek like a little girl.

While the story in Alien Isolation is not anything special it has enough intrigue Easter eggs and references to keep you interested and you want to see how it ends. Overall, Alien Isolation is a great game and if you’re an alien fan you will love it , if you don’t know alien this is still a fun survival horror and is worth your time.