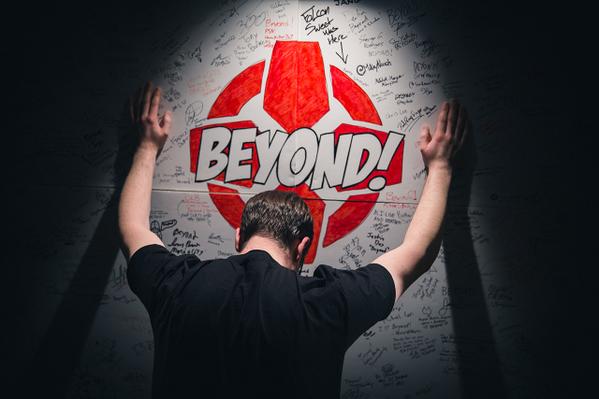 Today I said goodbye to a friend, my best friend as he would put it. No, he didn’t die, but I feel like a part of me did! After 8 years and 381 episodes, Greg Miller said goodbye to Podcast
Beyond. While that might not mean much to you, it means a lot to me.

You see Greg was not just an internet celebrity, or a loudmouth gamer, or any of the adjectives you could use to describe him. He was my friend. Although we never exchanged phone numbers, only exchanged a handful of emails, only met face to face 4 times, hell he doesn’t even follow me on Twitter (that s.o.b. lol), he always felt like a part of my life.

I’ve even been accused of modeling my own podcast after Beyond. It’s not because each week of my show, I use IGN to make our agenda. It’s not because we announce our trophy count because we feel the need to compete with him and Colin every week. Its cause Greg has such an infectious personality that you could not help but fall in love with him.

Over the years, I have been honored to be allowed to be a part of his life. We were there through his divorce and cancer, and although he never let it affect his work, we could all see he was hurting. We were there when he met Steimer and could generally see the happiness on his face and hear it in his voice when they started dating. We even fell in love with his dog, and when Greg made a Twitter for Portillo, we all knew we had to follow.

Without even knowing that he was doing it, Greg helped me through a rough part in my life. That hour or so that Greg and fellow members of Beyond would sit down and record each week meant that not only I could listen to PlayStation news, and I could hear how my friend was doing, but I could escape the world and my troubles, if just for a little while. That to me means a lot.

The first time I met Greg, was in my hometown of NYC. It was at a bar meet and greet. Nothing special going on other than he happened to be in town and we all know that Greg can’t go anywhere without doing a meet and greet. There were only 4 people there outside of Greg but from the moment I walked in, and he gave me a hug, I knew that I had a friend for life. I knew that the next time he was in town (NYCC 2013), even though I was not going to the convention, I wanted to go to the meet and greet and even called out of work to be there. The next year, when I was going to NYCC, I was surprised and honored that when he spotted my girlfriend who he met for maybe 10 min the year before in a packed Dave and Busters; he not only remembered her but made it a point to ask where I was. When I did finally catch up with him, he was running from panel to panel, but stopped long enough to say hi. It’s not something that is forced from him. That is Greg. He actually cares about his fans, but that’s the thing. We aren’t his fans, we are his friends.

While watching Episode 381 of Beyond, I found myself tearing up. I was tearing up because I was proud of him. Proud of the man he has become. Proud of what’s coming next, although it also scared the shit out of me.

When I read the news of Greg quitting IGN, I immediately was shocked. That was his dream job. Why the hell would he ever quit? After finding out the reason, I calmed down because I knew he would be ok. While he was no longer working for IGN, he really wasn’t changing what he was doing other than working for himself. You got to admire someone who has the balls to do that! We even made it a topic on our show to discuss it.

That’s how much Greg means to me! He means so much that when something happens in his life, it also happens in my life. He is my family. Most of all, He is my friend.