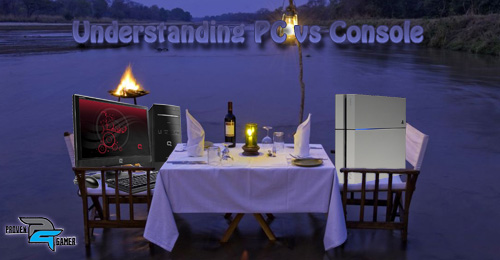 So, I know what you’re thinking. Well, hopefully. You’re probably thinking something along the lines of “PC vs consoles?! Oh no, another propaganda piece about PC is superior to consoles.” Well, I can say for certain that is not the case.

What is the case, however, is trying to understand what each platform brings to the table, so to speak. First, some rules. I do not consider handhelds like the Nintendo 3DS or Vita to fall under the “console” category. Consoles are PlayStation 4, Xbox One and Wii U. Mobile devices such as tablets/phones are another thing entirely. People try to make games for them and they mostly work.

Either way, I’ve found myself really at a crossroads lately, with my nights/weekends where I can actually game all the more troublesome to manage. What I mean by this is that my Xbox One takes awhile to boot, plus it’s in my living room, which requires me to logoff my computer, turn on the Xbox One, sit down with the controller in hand and decide from the 30 or so games I have on my Xbox. Lazy, I know.

But there’s a good reason. With PC gaming, unless it’s a game like The Witcher 3: Wild Hunt, things like anti-aliasing and render quality aren’t things you generally worry about. Plus, your games are literally right in front of you.

Next comes a major factor: price. If it’s above $5, I’m going to be pretty hesitant about buying any game. I really don’t like spending $20 on one game, but rather, many games. The philosophy behind this is simple, the more games I have to play, the more joy I get out of playing video games. This is something that has become a bit of a problem on services like Xbox Live and PlayStation Network. Why should I pay $20 for a bullfighting game when I can pay $20 for about 15 games? One, it’s just too expensive. Two, really? A bullfighting game? Three, why aren’t there more $5 games? Four, why don’t more games get promoted via Deals with Gold or PlayStation Weekly Deals?

Trust me, I don’t mean to harp on how bad this situation has become. It’s just irritating that Xbox and PlayStation have fallen so far. Back in the days of Xbox LIVE Arcade, I could buy games for $5 and was pretty much guaranteed a great game. Nowadays, you should expect to pay at least $15 for a halfway decent game, which in turn limits players from buying any possible expansions/DLC in the future, as they are most likely turned off by the pricing model of the base game.

This is just one of many problems that I hope is fixed sometime in the future. Yes, I know I can play PlayStation 1/2/3/4 games on the Vita and Windows 10 will be able to stream the games I own from my Xbox One to my PC, but both feel like a half measure to something greater, like using PlayStation Now to play PlayStation games on my phone/PC or using Steam to play the PC versions of my Xbox One games (and maybe even OG Xbox or Xbox 360) when I just want accessibility.