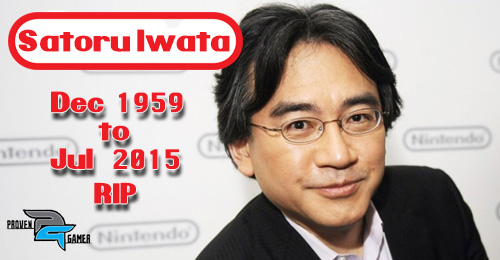 With many years in the gaming industry, Satoru Iwata has been successful in game design, leadership, and innovative and creative ideas/characters. Iwata began his career as a programmer for Nintendo, working on games such as Balloon Fight and Earthbound. In 1992, he joined Nintendo’s Hal Laboratory as President, and is credited with bringing the division back from the dead. Many people know Hal as one of Nintendo’s biggest second-party developers, bringing us classics such as Super Smash Brothers.

One of Hal’s biggest accomplishments was the creation of the loveable pink puffball known as Kirby. Iwata was the man who decided to have his team work on the classic game, Kirby’s Dream Land, a game which received great praise from all outlets. After nearly twenty years in the industry, Nintendo decided to hire Iwata as head of the corporate planning division at NCL, a position, which would arguably allow him to take gigantic, steps in his career.

It was here in 2001, that Nintendo launched the Gamecube, and the company saw a 41 percent increase in fiscal profits. During the Gamecube’s life cycle, Iwata helped develop some of the flagship games of the console. These games including Super Mario Sunshine, Metroid Prime, Animal Crossing, and The Legend of Zelda: The Wind Waker.

In 2004, Iwata was appointed as President of Nintendo, and his success would continually grow. Iwata would continue to prove himself as an outstanding later by overseeing the successful launch of two more consoles, the Nintendo DS and the Nintendo Wii. Iwata did not only live through the highs of the company, he also lived through the lows.

Iwata blamed himself for the massive fiscal losses which Nintendo has gone through in the recent years, and he even took a 50 percent pay cut to make sure that the company stayed afloat. Iwata started as lowly programmer, and worked his up to president of one of the most successful companies in the world. Iwata has made a lasting impact on the gaming industry, and his legacy will live on forever. Iwata’s, work ethic and leadership skills have set a bar for everyone who works in the industry.

Iwata, you will be remembered as one of the greats of the industry forever, and you will never be forgotten.