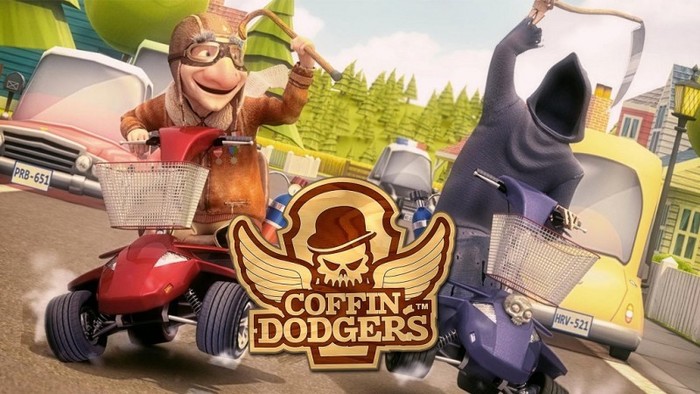 Reviewed for the Playstation 4:

Coffin Dodgers is a goofy kart racer that takes place in the Sunny Pines retirement village. In Coffin Dodgers you pick your geriatric driver and hit the streets racing against other retirees and the likes of Mr. Grim Reaper and his zombie horde.  At first glance Coffin Dodgers is a simple, silly racing game in the vein of Mario Cart and Crash Team Racing, and although this is by no means a deep or complicated game I found the hours zooming by as I dove into this game. To be clear this game is not trying to compete with Mario Cart. I personally believe that Milky Tea (the development team behind Coffin Dodgers) did a great job making this game self aware in the sense that this is a dark almost slapstick kart racer and not a more serious Mario Kart competitor. With that said I enjoyed my time with the game and achieved the platinum trophy in about 6 or 7 hours. There is replay values past the trophy list, but the trophy list will not take that long to complete.

Where Coffin Dodgers shines is gameplay. It is a easy to pickup, responsive arcade style racer that has very little learning curve. When you start the game you choose your character and are assigned a generic motorized scooter. There are just a small handful of characters to choose from and not special abilities. So it doesn’t matter who you pick, just jump right into the game. Off the bat the scooters control relatively well and are upgradable with in game currency that you accumulate after each race. One thing that I want to praise this game for is that althought there are not very many upgrade for your kart, you can instantly feel the difference after each upgrade. I did notice however that once you upgraded your scooter, it seemed the AI would tighten up and although you could notice your upgrade, it didn’t feel as if I got a leg up on the competition. But once your kart is fully upgraded and you go back to the beginning of the campaign you are leaps and bounds faster than everyone else. My favorite mechanic in the game had to be the ragdoll effects once you would wreck. I often caught myself laughing out loud as my geriatric driver would go flying over the handle bars of the motor scooter into a stack of boxes or over a fence. This added to the overall dark comedic aspect of Coffin dodgers.

Graphically this game is not pushing any boundaries. It doesn’t look bad, just very simple. Each race sections off a piece of the town or area you are racing in until the 3rd and final race of the area in which you run through most of the map. The final race is by far the longest and it combines most of your environments and elements in the game. for example in a earlier level there are UFOs that pass around the map with a giant beam shooting from the center. If it hits you, you spin out of control allows your enemies yo pass you, thus increasing the difficulty of the race. Sound design is where this game takes a hit. There is also a small amount of customization that you can do to your motorized scooter which will eventually turn into a full on go kart. It isn’t very in depth, just some simple upgrades to the motor and drivetrain, small weapon upgrades, and a few different colors to chose from, but it actually makes a difference to the look and feel of your kart.

The overall sound design is not good. From overly simple music loops that glitch up from time to time to very poor sound effects in general this game has one of the worst overall sound presentations I have come across in a long time. There are also some framerates drops and glitches that seem to come along side the sound drops. For instance there are certain spots on the later races where as I would make a turn and the environment would slightly change there would be a brief pause in sound and sometimes in the game. It reminded me of when my CDs would skip in my old Sony portable CD player. This only affects the gameplay for a quick second, but by today’s standards these type of things shouldn’t happen.

When it comes to modes and options this game has everything you would expect from the campaign mode, to 2 or 4 player split screen, to time trails and a free roam (or Crazy Grandad mode). I again noticed some frame rate hiccups once I added more players to the split screen but again it didn’t hinder the gameplay to bad. I spent most of my time playing through the campaign and split screen racing and can say it was a good experience. I did not enjoy the free roam mode and the timed trails because unless you are just into getting the best time there was no real reward for playing through them. In fact after completing the trophy list in just two play-throughs of the campaign, and of course one trophy starting free roam, the extra modes seemed almost useless.

Overall Coffin Dodgers is a fun game for all ages and is worth the price of admission. Its corky dark comedy mixed with fundamentally sound controls makes it a good experience with moderate replay value. And as a plus for all of the trophy and achievement hunters out there you cant go wrong with a 7 hour platinum/game completion. I would definitely recommend this game for its easy access, plug and play nature, and most notably the price. Releasing at $11.99 USD I don’t think you can go wrong with it. 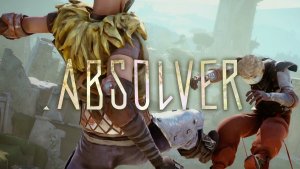