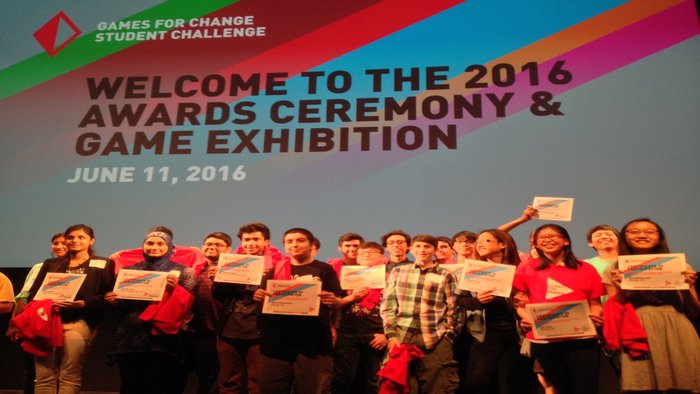 Games for Change (G4C), the leading advocate of games for social impact and learning, has launched the second annual G4C Student Challenge in New York City, Pittsburgh, and Dallas.

“Game design is a proven way to engage students in STEM learning and computer science,” says G4C President Susanna Pollack. “We believe that games are also a powerful tool to drive social change, reflect on history, and get kids interested in civic issues. Cities and public schools are participating in the Challenge to empower underserved students to build skills and problem solve in their neighborhoods.”

Building on its successful 2015 pilot program in collaboration with the NYC Department of Education, G4C is enhancing the program to include two additional cities (Pittsburgh and Dallas) in the 2016–2017 school year. The program is being implemented through a consortium of national partners, including Mouse and Institute of Play, and local partners in each city (The Sprout Fund in Pittsburgh and Big Thought in Dallas) with generous support from the Best Buy Foundation, National Endowment for the Humanities (NEH) and the Hive Digital Media Learning Fund in The New York Community Trust.

Students will design games around the following three themes, each supported by partners that provide research assets, workshops, and subject expertise:

“The Games for Change Student Challenge offers a wonderful chance for students and educators to explore the possibilities of meshing STEM and humanities learning in engaging, innovative ways,” explains NEH Chairman William Adams. “The theme that we are sponsoring, Local Stories & Immigrant Voices, will encourage participants to work with an accomplished group of humanities scholars and institutions to dig deep into history and culture and design games that feature the people, places, and stories that shape their world. It is, in every sense of the word, a groundbreaking program, and NEH is thrilled to be a part of it.”

Students can work either individually or as a team of up to four to create a digital game to submit to the competition, which is open to all middle and high school students in city public schools.

As part of the Challenge program, a select group of 20 teachers in each city will receive professional development to run game design courses at their schools using a curriculum developed by the national curriculum partner Mouse, with student mentorship provided by professional game designers. The Best Buy Foundation is delivering program and volunteer support so underserved teens have access to technology and the skills that enable them to enter the job market for the first time. The Best Buy Foundation aims to open the door to opportunity with technology training and tools that transform teens from consumers to creators — a new generation of engineers, entrepreneurs, teachers, designers, and dreamers.

G4C has also added a new component to the NYC Challenge program: a series of four hands-on game making events, or Moveable Game Jams. Supported by the Hive Digital Media Learning Fund, the Game Jams will each be hosted in a different NYC borough and focused on a Challenge theme, with activities facilitated by organizations leading the way on coding, STEM learning, and game development. The first Game Jam will be held on October 15th at the Andrew Freedman Home in the Bronx. More information and student registration is available at  http://bit.ly/MakeGamesOct15.

A jury of top game developers, civic leaders, and social innovators will evaluate submissions and select the winners in May 2017. Prizes, which include career development opportunities such as internships, job shadowing, and mentorships, will be presented at an awards ceremony at a cultural institution in each city. Three Grand Prize winners will be flown to NYC and presented onstage at the 14th annual G4C Festival in 2017.

The 2017/18 G4C Student Challenge is currently in the early planning stage with an aim to bring the program to more cities and schools.

Check out this video for more about the 2016 competition: