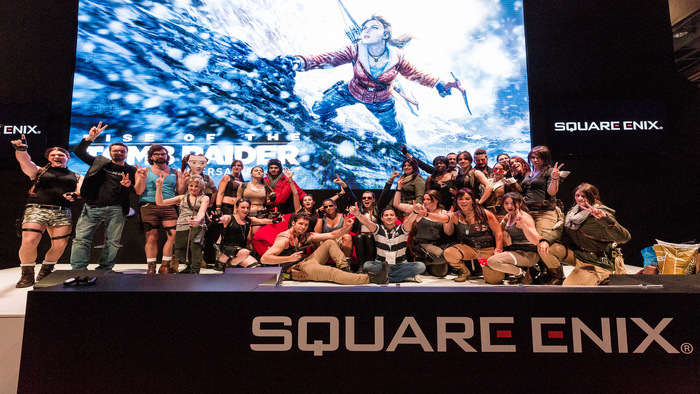 The Tomb Raider franchise is a two-decade strong cultural phenomenon which follows the globetrotting action-adventures of celebrated archaeologist Lara Croft.

Since making her video game debut in 1996, Lara Croft has been featured front-and-center on approximately 1,230 magazine covers spanning film, culture, lifestyle, and video game publications such as TIME Digital, Entertainment Weekly, Mad, PlayStation Magazine, and PC Gaming. With new covers from around the world being unearthed every day, that number grows to over 1,400 when factoring in covers that saw Lara alongside a co-star. These covers include portrayals of Lara Croft through official video game artwork, original illustrations, parody cartoons, and real-life photo-shoots with official Lara Croft models and actresses.

Check out our Flickr feed to browse 20 years of Croft covers, as archived by our community. [http://bit.ly/TR20_Mag_Covers]

Crystal Dynamics and Square Enix hosted a cosplay gathering at Paris Games Week on Saturday, October 29th as part of the ongoing celebration of 20 years of Tomb Raider. During the cosplay gathering, the European Tomb Raider community – spearheaded by passionate French fans – broke the Guinness World Record for the ‘Most People Dressed as Lara Croft’ in a single venue, drawing a crowd of 270 Tomb Raiders total. Fans could dress as any of the hundreds of official Lara Croft representations from the past 20 years, with participants donning costumes from the games, comics, movies, and even obscure fashion renders.

“Over the past two decades, Lara Croft has established herself as an iconic character in entertainment,” said Rich Briggs, global brand director at Crystal Dynamics. “Her Guinness World Record wins further solidify her continuing influence and relevance in popular culture.”

“Lara Croft is one of the most vital and iconic characters in gaming, with a powerful legacy and a string of great games under her belt,” said Stephen Daultrey, Editor, Guinness World Records Gamer’s Edition. It’s fantastic to see so many cosplayers celebrate her in this unique way. Along with her covers record, these are already two of my favorite new GWR titles of the year. I look forward to seeing them in next year’s Guinness World Records Gamer’s Edition annual.”

Lara has made an indelible mark on every facet of entertainment including video games, motion pictures, theme parks, lifestyle cosplay, and comic books. With over 30 video game titles released, selling over 46 million copies worldwide, winning hundreds of awards, and becoming an ambassador for scientific excellence to appearing live on tour with U2, Lara Croft continues to inspire and entertain millions around the world.