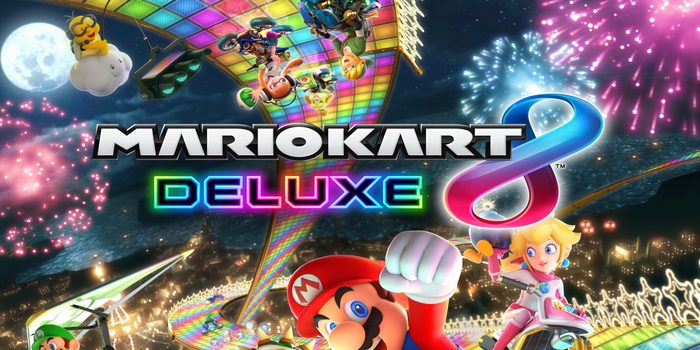 Tuning Up the King of the Kart

The last Mario Kart that I purchased was Double Dash on the Nintendo Game Cube. Double Dash was an incredible cart racer, and the very rock bottom of my Mario Kart addiction. In the following years, it would take a heavy 12 step Playstation rehab program and cleansed myself of Nintendo for the most part. Sure I owned some other Nintendo hardware, played many of the games, but my addiction was elsewhere. Then there was the Nintendo Switch and the gateway drug, Zelda that invited me back. Now Mario Kart 8 Deluxe is here and , well, consider me hooked.

For years Mario Kart has been the epitome of the arcade racer. Many have tried to emulate it; Crash Team Racing, Mod Nation Racers, Diddy Kong Racing, etc.. but none can take away the sheer dominance that is Mario Kart. Mario Kart 8 Deluxe has taken the franchise, and everything that makes it fantastic, and perfects it in nearly every single way. 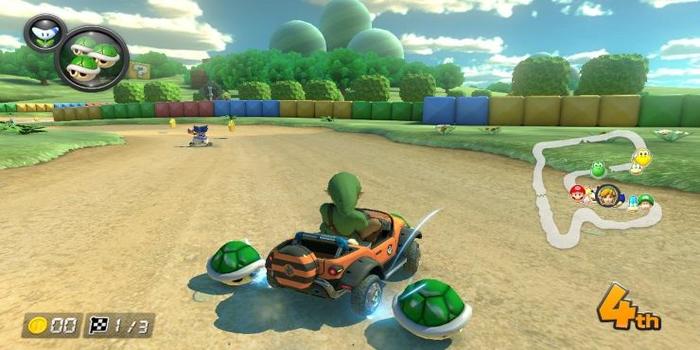 Mario Kart 8 came out for the Nintendo Wii U, so when 8 Deluxe was announced some people felt burned. I can sympathize with those people, but that does not change the fact that Mario Kart 8 Deluxe is an incredible game. Sure this may be a full priced port, but there is no shortage of upgrades here. Right from the start you have all characters (save for one Golden Mario) and stages open to you. This includes all stages and DLC from vanilla Mario Kart 8. It was a strange move at first, as Mario Kart is known for its unlockables as motivation for overcoming challenges, but having all of it open for you is actually quite refreshing. Don’t fret though, there is still plenty to unlock in the form of kart parts, customization options and a sweet Golden Mario.

Mario Kart 8 Deluxe brings some features back from previous installments that really liven up the game. You can carry two items again, and battle your friends in classic battle modes which the fan base had been clamoring for for years. There are 8 battle mode specific stages and some really fun modes here. A five balloon battle, Bom-omb blast mode (the only weapons are you guessed it…bom-ombs), Renegade Roundup, Coin Runners, and my favorite; Shine Theif (which is basically a capture the flag mode). There is plenty of mayhem here for you and your friends to enjoy. 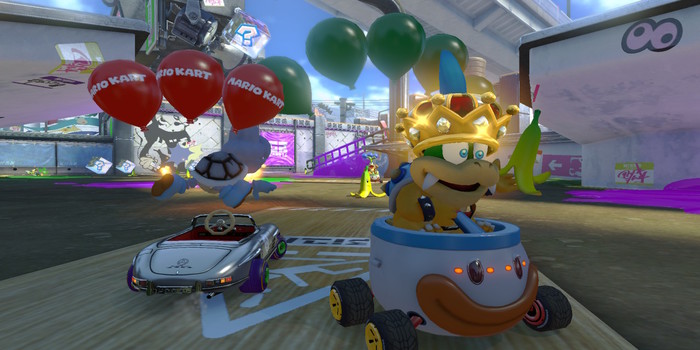 Speaking of fun with your friends, the most remarkable thing this version accomplishes is making use of the features of the Switch. It is flawlessly seamless to play with multiple Switches. You can support up to 8 Switch consoles here. It really is amazing. Online play, with the exception of no voice chat, is impressive. We all laughed at Karren bringing her Switch to that BBQ, but by Toadstool, it works!

The visual upgrades are not completely mind blowing, but that’s not to say that the game isn’t gorgeous. We are running in 1080p here in TV mode (up from 720p on WiiU) and 720p in handheld (compared to 420p on WiiU gamepad)Mario Kart has never looked this good. Period. There is very little to complain about visuals wise. Its also worth noting that the frame rate is solid.

All of these enhancements are great, but the game really shines when you are on the tracks. Driving never felt this good nor was ever this accessible to so many different types of players. For newcomers there is “smart steering” which helps keep you on the track. For those of us that play for long gaming sessions, there is an “auto-accelerate” so that you don’t have to be smashing that “a” button down (even though you dont have to smash it with all your might, admit it…you still do). You can just focus on the driving while the game works that gas button. All in all, the controls are absolutely perfect.

Folks, if you were on the fence about adding this to your Switch collection for any reason what-so-ever, get off the fence and go buy this game. The immense cast of characters and tracks, plethora of battle modes, enhanced visuals, and incredible controls make this one of the best Mario Kart games. Nostalgia aside, this is my new favorite Mario Kart and I have little doubts it will be yours.