Human civilization is at its breaking point. Gigantic insectoid creatures known only as the Vek are on the verge of global domination. The only defence that humanity has left is a squad of powerful time-traveling mechs who’ve set out to eradicate the Vek and save the world. Sounds like a bad B-movie right? That’s because it totally could be the back-of-the-box description for any number of terrible Straight to VHS Sci-Fi movies you used to find at your local video store(YEAH I SAID VHS, I’M OLD!)

That’s all part of the charm of Subset Games’ Into the Breach. It’s equal parts Mystery Science Theater, X-com, and Chess. It blends these all together into a one of a kind silly, deceptively brutal, ingeniously tactical game. This Sci-fi rougelike had more than enough tricks up its sleeves to pull me in and keep me hooked.

At the outset of each run you’ll choose a squad of three mechs, one pilot, and one of four islands to start on. After completing at least two islands you’ll be able to access a 5th, final island. You can either try to tackle the final island at that point, beating the game, or continue your path clearing the remaining two islands. Completing more islands allows you to become more powerful but comes with the caveat that enemies will scale with you. While playing you’ll acquire coins by satisfying certain conditions specific to each squad that will be used to eventually unlock new pre-built squads of mechs.  After unlocking your second squad you’re also given the option to roll a randomized team selected from all the current mechs you have unlocked or put together a custom squad.

Each mech fits into one of five categories: Prime, Brute, Ranged, Science, and Cyborg which all have different specialties. On top of the mechs you’ll unlock Pilots in various ways as you play. Each pilot comes with a special perk like Extra XP per kill or extra grid defense. They gain experience  and level up over the course of a run, gaining extra perks until they reach a max level. At the end of a run whether you succeed or not you’re allowed to take one pilot with you, perks and all, to the next timeline.

All these things, the teams, the mechs themselves, and the pilots all play incredibly differently. Mixing and matching all these things can produce some wildly varied results.

A lot of what i’ve just described really embodies the brilliance of what Into the Breach is all about. It’s about making choices like what mechs to bring or if it’s worth the effort to tackle a third or fourth island and the consequences of those choices. 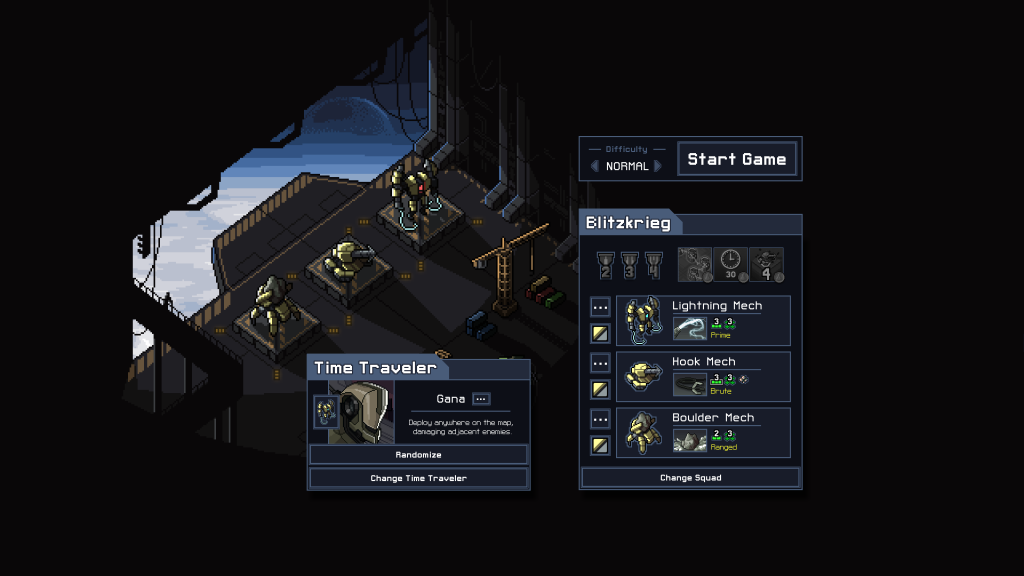 The turn-based battles play out on an isometric eight by eight grid; the same size as a chess board. Subset has even included the option to turn on a coordinate system that labels the rows and columns just like chess. I found they helped quite a bit in visualizing moves. Some streamers I’ve watched play Into the Breach, like LethalFrag, have used the coordinates as a way for viewers to suggest moves. I don’t know if Subset had intended on this but it’s a pretty cool consequence of the underlying system.  The eight by eight grid is not the only similarity Into the Breach shares with chess. Each battle is about thinking ahead and moving the pieces of the puzzle you’ve been given. It’s a weird hump to get over because As gamers we’re often told to try to kill everything.

Into the Breach presents itself like that type of game on the surface, but digging deeper you find it’s much more about mitigating damage and moving the pieces of the puzzle. How Subest manages to get this across is kind of brilliant and also a little dastardly. You are able to see the next action each Vek will take and how many Vek will be spawning in on the next enemy turn. This presents the odd dilema of “kill the things” vs “Move all the pieces….then maybe kill them.” A lot of the mechs in the game don’t deal much, if any, direct damage; however, most can shift enemies a tile or two in a given direction. Some have other ways of ensuring enemies can’t do damage, like being able to deploy shields or dropping smoke that completely interrupts a Vek’s attack. 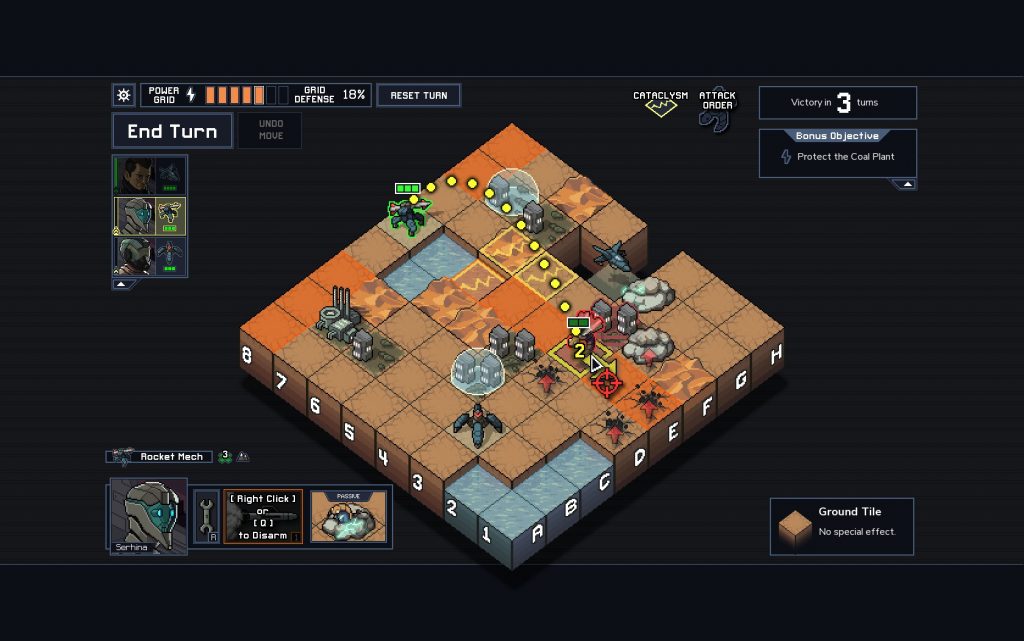 It makes you feel both like a genius and an idiot as things either go your way or unravel entirely. Should you have killed that one Vek instead of shifting it? Could you have positioned your squad differently at the beginning of a mission? These are all questions you will ask yourself in your playtime with Into the Breach.

Let me explain a little with an incredibly simplified scenario. Let’s say you have a Vek with two health about to launch a long range attack at a building four tiles directly in front of it. To the right of that building is nothing, it’s completely empty. The tile to the right of the Vek shows a new enemy will spawn on the next enemy turn as well. You have an artillery unit that can do two damage with a direct hit but will shift anything adjacent to the target tile over one to the right. In this scenario you can either choose to kill the existing enemy or shift it over to block the spawn. You chose to kill the existing Vek and let the new enemy spawn. Turns out that new spawn is a powerful unit that heals all Vek by one every turn. Now you have to deal with it.

You’re main task on each stage is simple, to stop the Vek from destroying small civilian towers that dot the playfield.This task is key to the overarching objective of Into the Breach; Keeping the power grid in your current timeline alive. The more buildings that are destroyed the more the power grid drops. Once it drops to zero it’s game over. For most games in the genre death more or less just means starting another run; there’s not much of a story tie-in. Into the Breach tackles the “Why?” of rouge-likes in a way I can’t recall seeing before. It  makes me care a bit more about a run. Watching the Vek pop up out of the ground and swarm a stage when you’ve failed feels worse here than most losses in games. The game really hammers this home by letting you know that your team now has to abandon the current timeline and try again. That word, “Abandon” it evokes a different kind of emotion than “You died” or a game over screen. It lets you know that you’ve not only lost but you’ve also failed humanity to the point that they’re not worth saving. You have to leave them to die and try again.

Little details like that, or the little speech bubbles that pop out of the civilian buildings as you drop your mechs on the play field help, pull the narrative together.  They make the times you do succeed in a mission, or end up beating a game, feel every bit as victorious as the losses feel demeaning. 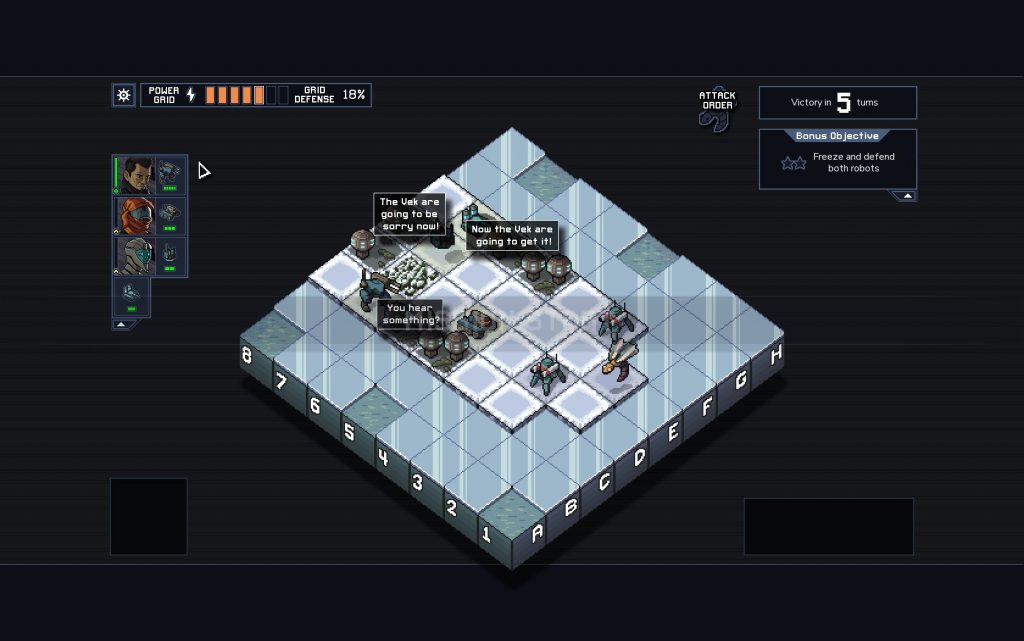 You’ll juggle the overall objective with missions within each stage. These range from “Kill x amount of Vek” to “Don’t let the Vek kill that one building” or “ Make sure this one Vek doesn’t die.”  Completing these objective will yield rewards that can restore power to your power grid or give you reputation to spend once you’ve cleared an island. Reputation can buy you new weapons or extra reactor cores to spend powering up a mech.

These reactor cores act as a modular level up system, you can activate them as needed to fill in power nodes on a mech and move them around if needed. If you’re familiar with Subset’s last game, Faster Than Light, it works much like the power system there.  Each mech comes with certain powers activated right out of the gate that can usually be enhanced by cores. Most weapons you’ll buy throughout a run will require at least one core to activate. On top of all that the reactor cores can also be spent to increase the area of movement or health for any given mech.

Again, this is a game all about choices.

Something that lives entirely outside of the bubble of choice and consequence is the overall aesthetic of Into the Breach. It’s got some really slick menus. When choosing a stage on a given Island you’ll see a fully laid out preview of the stage, the missions for the stage, and any additional hazards or special threats that may exist.  Loading into a stage from that preview is instantaneous and it feels damn cool. The Camera Just zooms in and the mission starts immediately. It’s oddly satisfying and speeds the game up in a place where I would normally expect a loading screen. The pixel art isn’t anything particularly mind blowing but does more than enough to get the ideas being conveyed across.

Subset Games’ follow up to FTL proves they’re not just a flash in the pan. The minute to minute gameplay of Into the Breach is so much it’s own brand that if you were uninitiated to the world of indie games you’d have no reason to think the same developer made both. Aside from the start menus looking similar they are almost altogether different experiences. Into the Breach is intelligently deceptive. It makes you think at the outset that it’s the kind of game where you need to “Kill all the things!” when in reality you’re just trying to “Move all the pieces.” Each randomly generated stage is it’s own puzzle with it’s own pieces. The only constant is the tools you’ve chosen to get the job done and how you use them.