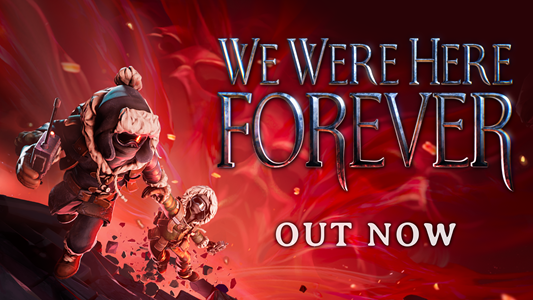 Play the new game from Total Mayhem Games, We Were Here Forever, starting today! The co-op puzzle-solving game is now available on PC, so return to Castle Rock to get some long awaited answers, and escape once more – or so you hope…

Watch the official We Were Here Forever launch trailer here:

Coming soon to PlayStation and Xbox.

Escaping Castle Rock – forever The clock strikes the hour and thus it is finally time to enter Castle Rock once more in We Were Here Forever! In this asymmetrical co-op puzzle game, you will make your way through previously unseen parts of Castle Rock. For the first time in the series, you’ll eventually leave the Keep. Once outside, you begin to uncover the story of Rockbury and the town’s inhabitants, who once planned a resistance against the King in order to escape this mysterious realm. Every adventure can unfold differently thanks to a more freeform design allowing players to choose where to explore first.

Hope will lead you on to an eerie Graveyard and have you descend down into the dark waters of the Foundry. As you do so, you will learn more about past events and characters from previous games that influenced this mysterious place. While trying to make your escape from Castle Rock in We Were Here Forever, you might start believing what you feared all along. Does one ever truly escape Castle Rock?
The Grand RevealAn epic climax awaits in We Were Here Forever. Questions which have taunted players throughout the We Were Here Series will be answered in this fourth part. Finally discover if breaking free from Castle Rock is possible, or if it’s a hell from which no one can escape.

Co-founder of Total Mayhem Games, Lucia de Visser, is  proud of this release and humbled by the response so far: “We started with little and have come a long way, with three great releases already behind us and a team that has doubled in size with every one of them. Today, after two and a half years of development – during a pandemic no less(!) – we’re excited to finally show our most ambitious project to date and hear the reactions and experiences of players from all over the world. This will be our greatest production so far and it isn’t the end for the explorers – we are already plotting their next cooperative adventures!”

We Were Here Forever will be Total Mayhem Games’ most impressive game to date, out now on PC and following soon after on PlayStation and Xbox. The team behind the game has worked hard on creating a We Were Here game that surpasses its predecessors in terms of graphics as well as scale. This makes We Were Here Forever both the largest and the most graphically advanced game in the series to date, with a more lively world packed with small details and over 22 completely new puzzles. Even experienced puzzle solvers can expect over 12 hours of gameplay.

“Escape… or face defeat? Let’s see which fate our guests shall meet!” – the Jester.

Players take the role of Antarctic explorers who find themselves caught up in a mystery revolving around the realm of Castle Rock (more backstory is revealed in the live-action video series We Were Here Stories: Chronicles of Castle Rock). Being separated most of the time, players will have to explore several areas, while every puzzle requires teamwork to be solved. Asymmetric puzzles give each partner different information, and challenges players to talk to each other and figure out exactly what information they have and how it might lead to a solution. You and your partner have nothing but your wits, a walkie-talkie, and whatever you can find on your way. Do you have what it takes to escape this mysterious realm or will you be trapped…  forever?

The features of the We Were Here Series include: