Fast, fun and simple; is probably the easiest way to describe Knightmare Tower.  The story is minimal; you are a knight who must battle the enemies of a dark tower and save several princesses along the way.  Although it sounds uninteresting, the story really doesn’t matter anyways.  The addictive, vertical-scrolling, gameplay will keep you coming back for more, long after you have ascended the tower.

Amassing currency should be your first priority.  Each time you kill an enemy you are given gold coins that can be used to upgrade your character through various power-ups.  These power-ups range from magical potions that make you invulnerable, to boots that allow faster character movement, and swords that increase your attack strength.  Finding the perfect common ground is key to surviving the first couple of levels.

In addition to ghouls, there is also lava that fills the tower. The lava is an instant-killing enemy, but if you are fast enough, you can avoid it.  Escaping the tower and avoiding the lava is controlled through the directional keys or WASD.  This causes your knight to move side-to-side, or downward to slice through your enemies.  At first it will take a few swipes to kill the monsters, but after some upgrades, you can pretty much kill anything in one attack.  With every kill, your knight will speed up the tower until you reach the ceiling. 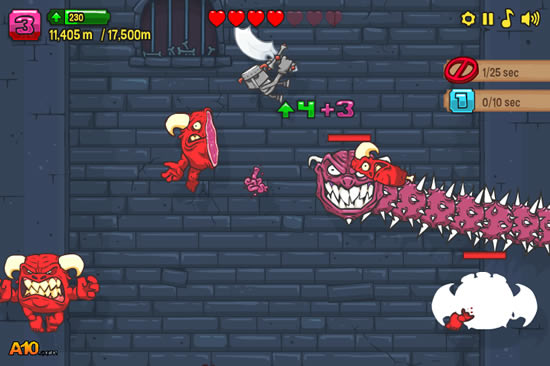 Failing is as easy as being hit by an enemy, reaching the ceiling without having the appropriate key, or falling into the lava.  Afterwards, you are sent back to the bottom of the tower and must do it all over again.  However, since there are a slew of upgrades, you can keep your adventure interesting.

There is at least one glaring issue that I ran into multiple times.  The game would crash, which in itself is annoying, however, when the game crashed, my saved data would be deleted.  The first time this occurred I was annoyed, but when this issue happened two more times, I became fed up and stopped playing all together.  It only takes about three hours to max out your knight’s abilities, but when the crash persists this much; it is infuriating to say the least.

Knightmare Tower is addicting and fun. Just when you think that your going to quit the game, you will come across a new upgrade that keeps you playing for a few more rounds.  Nevertheless, it has severe issues, and thus its full potential is never within reach.