For a lot of people, the golden age of platformers came and went years ago. Released on June 26, Shovel Knight burst onto the scene. It quickly rose to critical claim, fans stating it as a rebirth of classic platformers; a game that rivals even the best Mario games. Critics are giving it perfect scores, and it’s sales are high. So is this hype really justified? YES!

Shovel Knight is one of the first games to be made through Kickstarter, and after playing the game, it’s a great example to show that Kickstarter CAN work. The story of Shovel Knight is nothing new: The evil Enchantress has taken his love, and a group of evil Knights, known as The Order of No Quarter, stand between you and them. 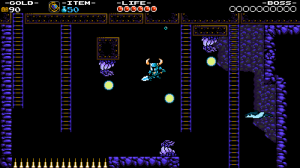 Throughout these levels, you will be acquiring money, which you will use in the Village area, to upgrade various aspects of your Knight. You can spend money to upgrade your health bar or magic bar. You can also gain better weapons and armor, along with magic spells to cast in combat. This is a great insentive to actually go out of your way for coins and jewels in levels. You can also replay previous levels, if you want to play it safe and farm for gold. 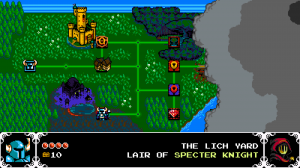 The visuals? Absolute amazing use of only the colors that were avaliable with the NES. The soundtrack? Addicting and catchy. Overall, it’s just easy on the eyes and ears.

This game was a nonstop joy, and might be the first platformer, that I feel is perfect in every single way. I racked my brain over and over, trying to find a flaw to point out and discuss, but I can’t find anything.