If you have not been following the indie game Monster Crown prior to today, shame on you. Monster Crown has launched a Kickstarter earlier this week and subsequently smashed their goals. With over $11,000 raised and an initial a goal of $5,000 in less than four full days live, Monster Crown is primed to set the world on fire. Shad Shwarck and lead developer Jason Walsh are joining myself and Andy Asimakis on the next episode of Nintendo Duel Screens to talk all about the concept behind Monster Crown. Before that show launches I had the pleasure of sitting down with Shad to talk about the art of Monster Crown and the artistic process behind it all.

Proven Gamer: Hey Shad! First of all, congratulations on smashing your initial goal and then some on Kickstarter. That is an incredible feat!

Shad: Thank you and thank you so much to everyone who helped us out. None of us expected this much positive reception this fast, but we absolutely couldn’t have done it without some awesome fans and supporters of Monster Crown. We can’t wait to share the finished game with everyone. That goes for you guys at Nintendo Duel Screens and Proven Gamer, too!

Proven Gamer: Okay, so, for those who don’t know what Monster Crown is, tell us about it. What is the elevator pitch?

Shad: Monster Crown is a game where you meet, battle, tame, and breed monsters, and through breeding and training can create unique crossbreeds, even so far as discovering combinations other players may never find. Set in a universe where dangerous monsters roam, and the people have only recently started to rebuild their land from a brutal civil war, you find yourself face to face with the echoes of that bloody conflict. It’s up to you and the monsters you’ve contracted to traverse this dangerous world – I can’t say exactly how you’ll face the shadows of the past, and not just to avoid giving too much away – there’s a choice to be made, and you’ll just have to play to see what happens!

Proven Gamer: Man, it is no wonder people are flocking to support you guys. So, with a game of this scale and with all the designs needed, how did you handle that type of scale? What were some of the challenges for you?

Shad: There are a lot of designs needed for sure – I think one of the biggest challenges for handling that is making sure it stays consistent, while avoiding stagnation. You don’t want to make a game that looks like you have a cute round blob with anime eyes next to a realistic, muscular hellbeast that looks like the Predator. Key to handling large projects is to have solid art direction – by deciding guidelines on how visuals should look overall, even designs with a lot of variance look like they belong with each other. For example, monsters for Monster Crown use four colors: black, white, and two others that can be passed on in breeding. Pixel dithering is used to create more intricate shading, but we never exceed that color palette (except in very rare circumstances.) That way, even if you have a small, cute monster next to a big, terrifying nightmare, they still appear like they belong in the same world.

Proven Gamer: Consistency is key, and from what we can see, these monsters all seem to fit together really well.  Did you ever hit a wall artistically? A time where you just looked at the page and simply could not come up with anything? I imagine with all the Pokemon games, Digimon Games, etc, it could be hard coming up with original designs. Would that be fair to say?

Shad: I don’t have too much of a problem coming up with original designs admittedly – it comes fairly easily to me and if something looks too generic or needs some tweaks I don’t feel like that’s too hard. I think I’ve been doing it for so long, I can think through the process quickly. That said, I think the biggest walls I hit are trying to ensure that colors look okay, that I’m coming up with something that will look nice with any available color palette. That, and making some designs work nicely in low resolution – it can be a blessing as much as a curse though, because while on one hand working small-scale can be difficult, it also stretches my design muscles in ways that they wouldn’t get stretched if these monsters were high-res. You can’t fall back on ornamentation or texture at this size – it has to be solid in design and readable at small dimensions. 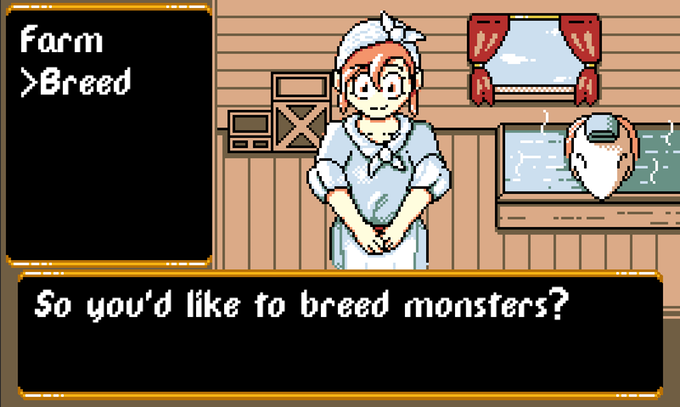 Proven Gamer: Shifting gears a little bit – On next week’s episode of Nintendo Duel Screens, releasing Monday 04/16 at 8:00am EST, you mention how you became involved in Monster Crown. It is a really cool story we wont spoil here, but can you tell us why this project is so important to you?

Shad: For one, it’s very fun and challenging and I get to work with incredible and ridiculously talented people. It’s the first time I’ve really had a chance to exercise my design and art muscles on a team project, and I couldn’t possibly ask for a better project to do it on. I’ve always been interested in art direction, writing, and character design, so I am incredibly lucky that I have a hand in all of those.

On a more personal level, I feel video games saved my life – it’s been a dream of mine to share the power video games can have to others by making games myself. Video games are a truly unique medium that immerses their players into a world they not only can lose themselves in visually and audibly, but in a tactile sense. Monster Crown is a very special chance to help create an atmosphere and experience that someone could get lost in and fall in love with; it even one person can feel that magic, can for a little while “move in” to the world of Monster Crown, to feel at home there and forget the real world for a while, that would be the most amazing achievement in my life so far.

Proven Gamer: I bet you don’t have to look very far to find gamers that feel a similar way about video games. Thank you for sharing that. So lets get back into the art of Monster Crown. This game has a very Pokemon-like aesthetic, yet the monsters seem to have a certain edge to them. A darkness. How did you settle on that?

Shad: That aspect was present before I joined the team, but it’s definitely one of the major things that drew me to the project. Both Jason and I are huge fans of creepy, dark, somewhat horror-tinged work, and that’s probably why our creative processes line up so well! We both wanted to instill that childlike wonder that you’d get playing the old Pokémon games – not just merriment, but terror, too. There was so much I didn’t know playing those as a kid, it felt like anything was dangerous and anything was possible. To me it’s just natural to want to instill that on-edge feel when working with a more “retro” aesthetic.

Proven Gamer:  How does the artistic process work? Is it as simple as pencil to paper?

Shad: Sometimes yes, sometimes no. It depends on what the specific asset I’m trying to make requires. Some monsters were sketched fully before being sprited. Some were basic doodles that then were fleshed out in spriting, and some were a vague idea that sparked a desire to push pixels around until something looked right. Sometimes multiple iterations are drawn out before deciding on one, but sometimes the first draft only needs a little tweaking. When it comes to things like backgrounds or illustrations, though, I always start with a sketch to ensure composition will be readable and to get the general idea down.

Proven Gamer: So now you have a little treat for our readers – you are going to go over the artistic process step-by-step and reveal a never before seen monster. I can’t wait to see it!

Shad: Neither can I! Here we go!

A simple drawing of two types of creatures that will be combined to make a new monster! 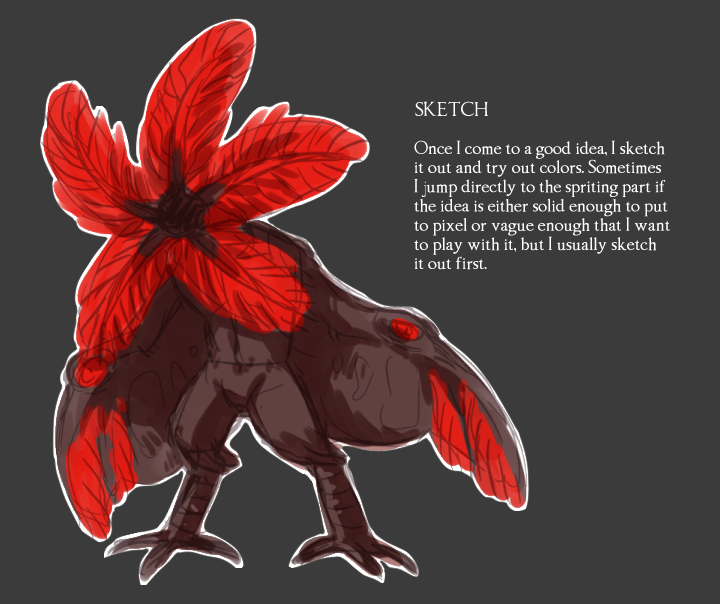 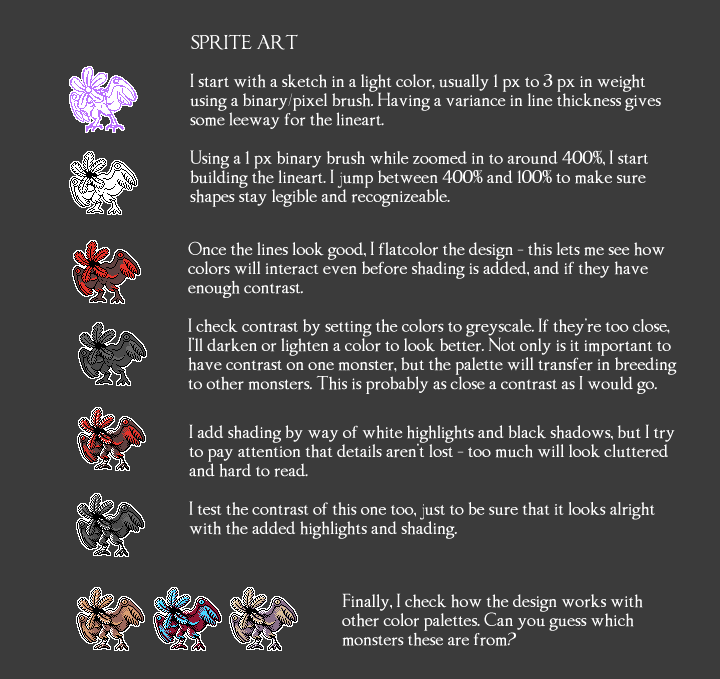 The sprite art comes to life! 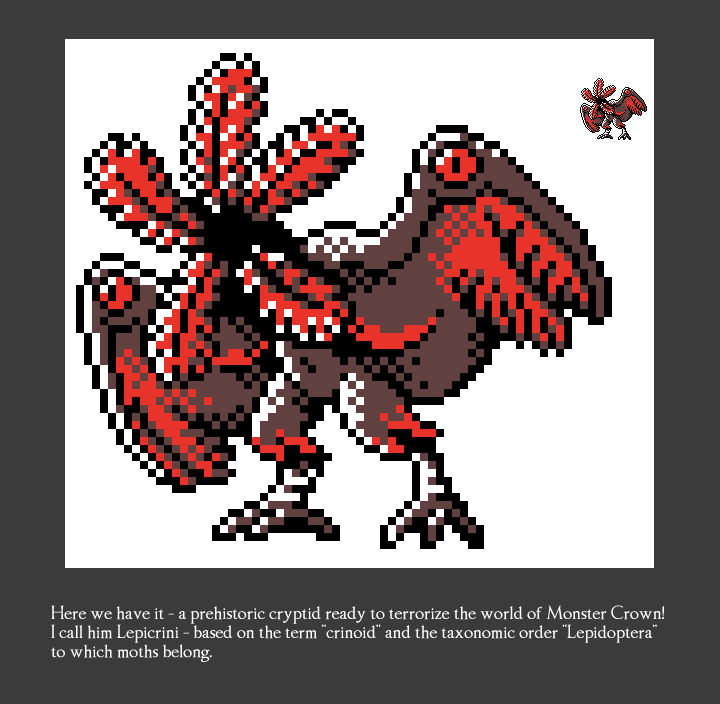 Presto! The final product is a monster the kids of Stranger Things would be terrified of!

Proven Gamer: What a cool process! Thank you for sharing that with us! So with this example the idea seems to be something you toyed around with. Is it always that way or does the design team say “hey I want a monster that does x y and z” and you design from there?

Shad:  It’s a bit a mixture of both – sometimes I come up with an idea and show the team and we decide it’s a good idea and we should put it in, and sometimes we see that certain types of monster or biomes are lacking and I design based on that. I have a lot of free reign over the designs I do, so I’ve never followed any guidelines like “can you make a monster that looks like (animal) that lives in (biome) and does (action)”, but I think maybe it would be fun if I did. I’ll have to ask Jason for some prompts!

Proven Gamer: So… do you have a voice for the characters you design in mind?

Shad: Sometimes – I definitely have a voice in my head for some of the villains and a few of the monsters. Most of them I don’t imagine to have much of a voice at all, so I tend to envision them in their daily lives and see what happens.

Shad: Ooh, can’t say I’ve thought of that! Probably the entire soundtrack to the game OFF. It’s creepy but occasionally fun – Laz is creepy but I find it kind of unnervingly cute too. 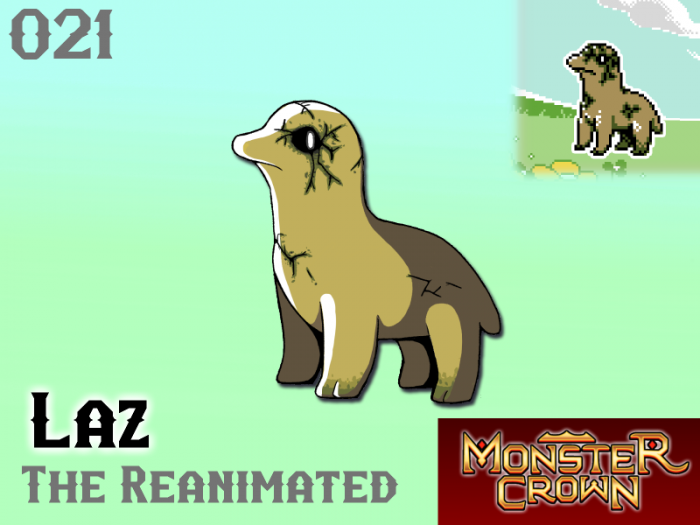 Proven Gamer: I hear Sad But True by Metallica for some reason. Okay last question –  You have heard the Nintendo Duel Screens theme song 8-Bit Attack by Zazu Pitts – what would a monster design based on that tune look like?

Shad: Hmm.. a round, rooster-like bird (maybe one of those Polish chickens with the fluffy rockstar “hair”) with perhaps piñata paper feathers and a spiked bat in place of a tail comes to mind. Bright and bouncy, but it has an undertone of meaning business. It’s the piñata that strikes back!

Proven Gamer: Thank you so much for doing this!

Shad: You are very welcome! Thank you for inviting me to do this!