News, and subsequently news stories, can be very fluid. With all the hustle and bustle of everyday life, sometimes stories will slip through the cracks. Well, the Proven News Wrap-Up is here to fix all that! Below are what we have determined to be the top stories for the week of 4/27. Although they are numbered, they are not ranked in any particular order.

The next PlayStation exclusive is almost ready to roll. Earlier this week, Quantic Dream announced that Detroit: Become Human has gone gold, about a month in advance of its May 25 release date. There is a lot about David Cage’s new game for PlayStation owners to be excited. First, after playing the game at PlayStation Experience and recently checking out the free demo(available now), the game is gorgeous. The environments, character designs, and lighting highlight what the PlayStation 4 is capable of producing. The stakes of the demo itself also feel high. Players will have the opportunity to play out the hostage negotiation scenario that has been shown several times. At the end of the demo, a flowchart is shown, highlighting all the different ways the game can play out. Detroit: Become Human releases on May 25.

The background for this story dates back to events that occurred earlier this year. Several French outlets reported on sexist, racist, and toxic work environment at Quantic Dream, the company developing Detroit: Become Human. David Cage, the CEO of the company has denied these allegations since they surfaced. Now, the company is taking the next step, and have filed lawsuits against Le Monde and Mediapart. Hearings for the case will begin in June, so the resolution to this story is still to come.

Microsoft also has some big hitters coming in the month of May. Metal Gear Solid V will be available starting on May 16, while Vanquish, Platinum’s third-person shooter also releases that day.

The March NPD’s are out, and Far Cry 5 has found itself on top of software sales. Not only is it the top selling game of March, but Far Cry 5 also surpassed Monster Hunter World to become the best selling game of the year.

Along with the success of Far Cry, several other games hit big milestones for the month of March.  Sea of Thieves, number two in software sales for the month, had the best launch month for a Rare game since the NPD’s started being tracked in 1995. Kirby Star Allies, number three on the list, sold 90 percent better than the previous best selling Kirby game, Kirby: Nightmare in Dream Land.

Splatoon 2 and the Switch version of Super Smash Bros will be represented in a big way at this year’s E3. The Splatoon 2 World Championship will be staring on June 11th and conclude on June 12th. A Video Presentation will be an 12:00pm Eastern time on June 12th that will include the recently announced Super Smash Bros. game. Right after the video presentation we will have 3 days of Switch gameplay with Nintendo Treehouse members and developers. Right after the Splatoon 2 World Championships, there will be the Super Smash Bros. Invitational 2018. 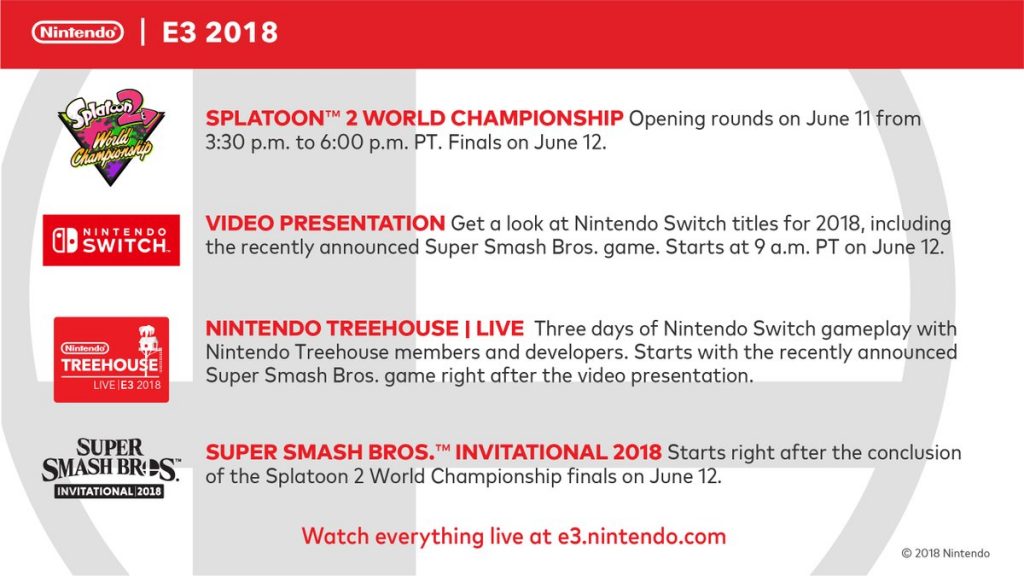 Square Enix has released the official Shadow of the Tomb Raider trailer called “The End of the Beginning”. The trailer name eludes to the fact that this is the final chapter in the origin story of Lara Croft. What is also quite interesting is that the trailer opens and closes with X-Box logos without any mention of Playstation. The official website still lists Shadow coming on all platforms on September 14th, so it must just be a marketing exclusivity. Watch the trailer for yourself below.

Did we leave out any of the big stories of the week? Leave them in the comments below