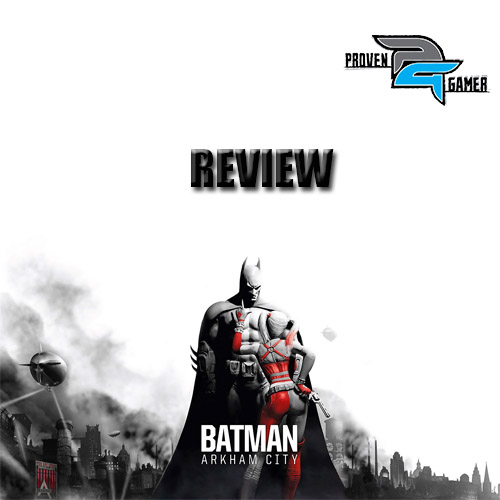 Are you ready to return to Gotham City and take on the criminal underworld? Eager to play as the Dark Knight taking on ten thugs at once only to be the last man standing? Can’t get enough of towering over the corrupt streets of Gotham? Well your wait is over because Batman Arkham City has arrived and the results are more than expected.

Arkham City has retained a great deal of its predecessor’s winning game formula and augmented it for a daring and expansive sequel. The first noticeable improvement is the environment of this game. When you first played Arkham Asylum, you were in a linear environment for a good portion of the game, but were later rewarded with free roaming access to the small island. In Arkham City, you have the freedom to travel the entire area the moment you don cape and cowl. This new change helps to give you the feel of what you will come across as you travel this Escape from L.A. themed city.

A.I. In the game has been improved to give the player a bigger challenge. Enemies can now use deadlier moves and weapons, call assistance from others from far away, use thermal goggles to find a hidden super hero, and even take hostages while Batman is in predator mode. The new methods of the A.I. will leave you rethinking how you are going to save the day.

The combat in Arkham City has gone through some nice revisions, but still stays true to the core formula that made Arkham Asylum a success. The fighting, counter attacks, and use of gadgets can still be achieved, but Batman’s arsenals of attacks have improved and Batman can now take on more thugs (up to fifteen). The use of gadgets can really be played upon in the middle of combat. Aside from throwing a batarang, Batman can plant explosives on the ground (as a trap), use the bat claw to drag an enemy into a takedown, unleash a swarm of bats to dazed enemies for a moment, disarm weapons, and so on.

Batman’s combat moves aren’t the only things that have improved in this sequel; Batman’s health monitor has been changed to show a more comprehensive understanding of his vital. His health can be upgraded through combat armor (which increases his ability to take punches) and rifle armor (which helps against gunshots).

This sequel helps to create a bigger depth as to the dangers of Gotham City and help to flesh out the caped crusader to the gamer. Batman’s responses to villains, civilians, and allies are darker and grittier revealing how Arkham City is testing Batman. Combine this attitude to a more aggressive means of taking down criminals (like dive bomb attacks and interrogations) and you see just how much Batman feels toward this monstrosity of a rehabilitation center in the middle of the city.

Some features still remain the same such as the side missions of combat mode and predator mode. The difference is the player can play as Batman, Catwoman, or other characters (provided they obtain the DLC for those characters).

The main concern I have with the game is the addition of Catwoman into the story. Catwoman’s appearance isn’t as big as it was made out to be. She only appears two or three times in Batman’s storyline and her storyline doesn’t provide anything new into the game or plot. Her abilities aren’t as big as Batman and ability to traverse the environment is slower than the Dark Knight. You can enjoy the game without getting too involved in Catwoman’s role.

As for the Riddler, his concept has returned as Riddler’s Revenge. His trophy count is bigger, puzzles are tougher, and demands leave you unprepared for the fun of this game. One can spend hours just traveling around the city and obtaining all of Riddler’s hints, puzzles, and trophies.

Batman Arkham City is a definite win for anyone. The game is huge, the side missions are fun, and you have the potential to see many classic characters that help Batman or his rogue’s gallery.

I give Batman Arkham City thumbs up for our ProvenGamer fans.