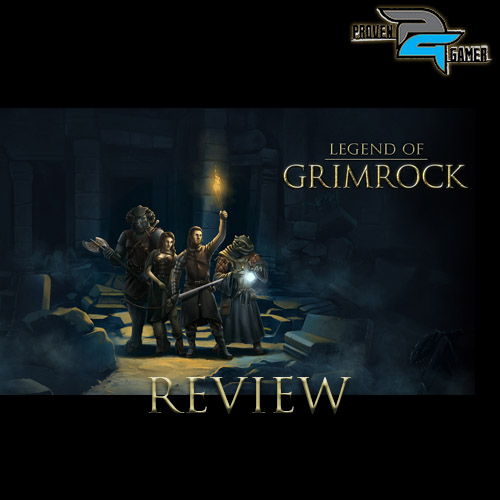 My game library is full of first-person shooters, action RPGs and strategy games, but rarely have I come across a game that is anything like Legend of Grimrock. It certainly was refreshing to play something out of today’s normal array of games.

Almost Human, the developers of Legend of Grimrock, have created a PC game that plays like an old-school dungeon crawler but uses modern graphical techniques to give the game a very realistic atmosphere. Is this a magical combination, or is it a failed attempt to bring old school dungeon crawling to the modern gamer?

At the start you set a difficulty, create your own characters, select one of four races (and one of three classes), distribute skill points and choose up to two traits for each character.  You can also opt for “Old-School Mode,” which disables the auto-mapping feature for those hardcore adventurers.

As the game beings, your party of four is thrown into the top of Mount Grimrock due to acts of treason. A bit harsh, but I suppose it’s better than dying, right?

Like most RPGs, Legend of Grimrock is full of strategy. You have four different characters that can specialize in different skills, and these skills differ depending on the class. Gaining enough experience through combat allows your character to apply points to those skills. Put enough points into a certain skill, and you’ll gain bonus stats to certain attributes. The level system works quite well and is easy to use.

Now, depending on which characters classes you chose, you might want to take character order into consideration. What I mean by order is that you have two characters in the front and two in the back. Mages normally have little health, while warriors use brute force to give and take a beating. With this in mind, I’m sure the mage wouldn’t mind the extra protection.

Diving into the actual gameplay, you and your enemies move and fight in an active time battle manner, which is similar to a turn based RPG – only after attacking, a charge time is applied before you are able to attack with that character again. You are, however, able to move freely without waiting.

Speaking of combat, there are quite a few enemies, and each one is unique. While some are slow and strong, others are fast and weak. Of course, running into multiple enemies at once won’t make a bit of difference. You’ll probably find yourself either running away or being trapped in a corner and fighting for your life. The game certainly can be challenging, but there are numerous ways to go about a tough situation.

Legend of Grimrock will test not only your fighting tactics but also your mind.  Aside from the combat, you’ll encounter numerous puzzles throughout the game, and while some puzzles aren’t required to continue down the mountain, completing them will give you extra goodies that will no doubt help on you on your quest to escape Mount Grimrock. Some of the puzzles later in the game however are required to continue and become extremely difficult. Depending on how good or bad you are at puzzles will determine how much time you’ll spend figuring them out. Some players may breeze through these puzzles, while others may need to visit their favorite forum to continue their journey.

Visually, the game is stunning and quite detailed. Yes, you are in a maze like dungeon, but the lighting, models and enemy animations make for a very beautiful game in a believable setting.

The audio also does its job quite well; the ambient sounds and music help give the game its eerie atmosphere.

Overall, I really had a lot of fun with this game. On medium difficulty, it was challenging but not overbearing, and it took me about 12 hours to complete. While the game may not be as long as long as some RPGs, there certainly is a lot of replay value, as you can try different strategies and class types, as well as find the 71 secrets hidden behind the walls. Legend of Grimrock not only brings back old-school dungeon crawling to the modern age, but it does so in a very impressive fashion.