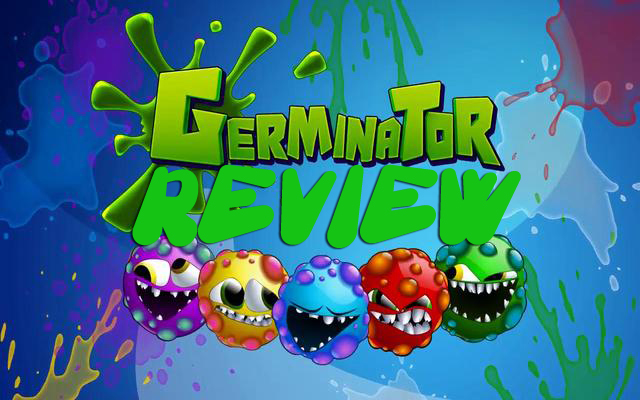 Germinator is a cross-buy enabled puzzle game for PSN developed by Creat Studios. Their previous games were known for being fun little diversions from “heavier” games, and Germinator is no exception. Germinator is a simple puzzle game that follows the tried and true formula of pick-up-and-play accessibility. Above all else however, the game is quite simply fun.

In Germinator you are tasked with eliminating all germs within different environments. You do so by shooting germs at other germs. When you match germs of the same color, they absorb into each other and become a bigger gooey blob. When the germs get too big, they pop in a satisfying icky mess. The game feels very reminiscent of games such as Bubble Bobble, but Germinator does a great job of differentiating itself by introducing the absorbing and popping mechanics. This leads to some interesting light physics-based puzzle solving and a really cool visually satisfying build up of combos. Matching colors isn’t the only thing you’ll do in Germinator however, as there are also special power-ups available. After making a set number of matches, you’ll be able to super-charge a germ. A super-charged germ has special effects such as exploding all germs of the same color, or eating up all surrounding germs. Each colored germ has its own respective specialty when powered up. 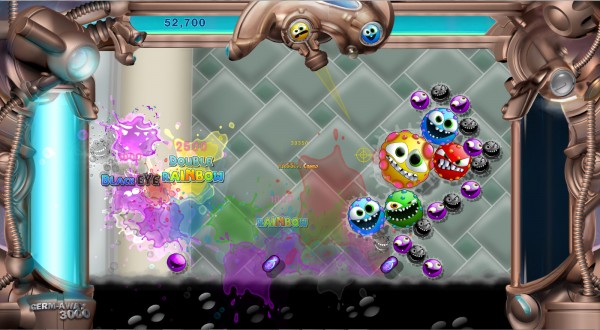 The mechanics work very well, and it’s quite mesmerizing to watch a germ grow to a humongous and atrocious size only to pop into a multicolored gooey mess. The visuals are very colorful and vibrant, and the detail in the look of the germs is charming as each germ has its own facial expression. As the germs grow their eyes pop out of their head, the expression becomes more strained, and you can see veins popping in their face. That maniacal sense of humor is nicely contrasted by the overall tone of the game. The game is very silly and full of horribly chuckle-worthy puns and pop culture references.

There are many ways to play Germinator. There are four modes available: story, puzzle, duel, and arcade. Story mode takes you through various environments and in between environments there are small bits of text that serve little purpose other than throwing a few more puns your way. Puzzle mode ups the difficulty a bit by limiting the amount of germs you can shoot. Both story and puzzle mode have a three star rating system that grades your performance, so if you’re a completionist, you’ll have plenty of extra work ahead of you. Duel mode is a versus-mode that you can play either with a friend locally (on PS3 version) or an AI. Unfortunately, there’s no online functionality for the duel mode just yet, but if people demand it enough that’s something that may be added in through a patch at a later date. Arcade mode is an endless survival game in which you fight a never-ending wave of rising germs. There are leader boards for story, puzzle, and arcade mode available as well. 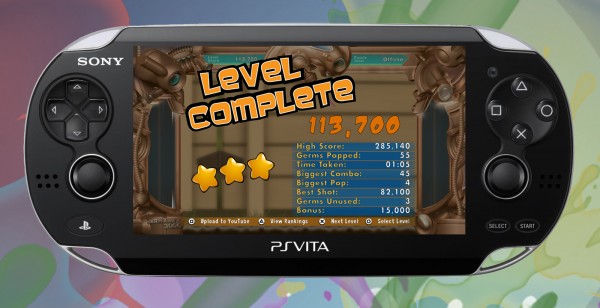 The variety doesn’t end there, though. Creat Studios did a wonderful job allowing players to play this game however they please. The game is available on both PS3 and PS Vita, and uses each system to its fullest. The PS Vita version allows you to use either the analog sticks or the touch pad to play. I found that using the touch pad was actually a bit more precise for the trickier shots. Similarly the PS3 version allows either Dualshock control or PS Move control. I was very pleasantly surprised by the accuracy and ease of use with the PS Move functionality, and that ended up being my preferred way to play on PS3. The only downside is that operating the menu screens is difficult with the move controller. (It’s treated in a similar fashion to the XMB move controls where you must hold the T button down and move the controller up or down.) The Playstation 3 version also boasts an additional option to record your gameplay and upload it directly to YouTube. The recording happens in the background, and uploading is quick and easy.

Germinator isn’t going to change puzzle gaming forever, but I don’t think that’s what it really sets out to do. Overall, Germinator is just pure silly fun! It’s very well crafted, the game play is fresh enough to remain interesting, and the plethora of options and modes will keep people coming back for more. The only downside is that there’s currently no online multiplayer functionality and the Vita version doesn’t have local multiplayer through Ad-Hoc. Other than that, it’s a great game to play while killing time on the bus or while hanging out and having a laugh with friends. If you’re looking for a profound and brain-bending puzzle game you won’t find it here. However, if you like colorful, simple puzzle games and a good laugh, you can’t go wrong with Germinator.