Super House of Dead Ninjas does not mess around. The very same tightly-knit mechanics that make SHODN a ton of fun to play are the same ones that will make you lower your guard, lose a life, and curse yourself for your dumb mistake. It’s the constant sense of urgency brought on by the ever-depleting timer in the corner of the screen that will coax you into trying to brute force your way through stages in a rush. Beware, though. It is an instant death sentence. Death is essential to progressing through SHODN to help you learn specific enemy patterns and experiment with different weapons. Thanks to the game’s upgrade system, dying often means permanently acquiring new abilities, weapons, and upgrades that help you to improve your progress every time you play.

Think of Super House of Dead Ninjas as Spelunky, only if your spelunker moved with the speed and agility of Super Meat Boy and carried shurikens. That is all to say: it’s a very fast-paced roguelike. Though unlike many games of its type, SHODN allows you to begin your journey from any stage you’ve already completed. In a way this is great, because at some point there isn’t much value in repeating the first stage over and over. Every stage is randomly generated, to a point. While the stage won’t be the same every time you play it, you quickly begin to recognize tile sets that are simply placed in a different order. 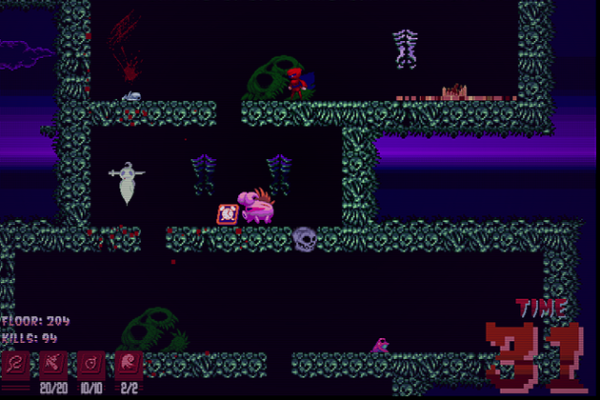 Possibly the greatest single element in SHODN is its upgrade system. Many roguelikes force the player to start each new session with nothing but knowledge, but SHODN’s upgrade system is designed to give you a new advantage nearly every time you die. New weapons, projectiles, and bomb types are unlocked by completing tasks that are usually easy to meet without trying. All of the upgrades are completely permanent, including health and time enhancements. In this way, no matter how much trouble I had along the way, I was at least going into a new session with a new advantage.

There are only four stages in Super House of Dead Ninjas, but don’t let that fool you. Each one will take many tries to complete. As for the final stage, that can only be accessed by completing the third stage on Hard mode. Considering Hard mode supplies you with one measly life, I’m not ashamed to say I’ll probably never be able to pull that off. In order to add some considerable replay value, MegaDev has included a level editor. The editor is simple enough to use, and includes Steam Workshop functionality, so you can download other players’ stages to your game. 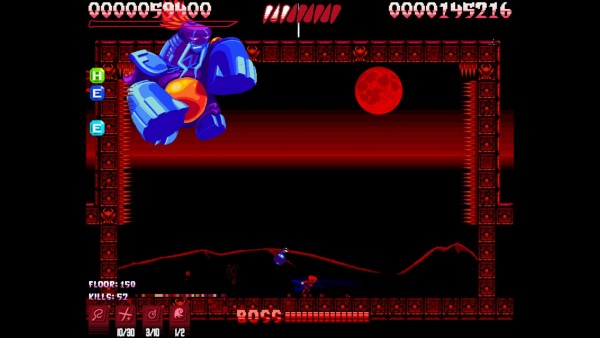 Super House of Dead Ninjas effectively draws the best elements from games like Super Meat Boy and Spelunky. Its fast-paced movement and tightly-wound combat excels in giving SHODN a feel all its own. It’s a roguelike that encourages you to keep trying by dangling each upgrade in front of you like a carrot on a stick. With its low barrier to entry, replay value-adding level editor, and superb upgrade system, it’s hard not to recommend Super House of Dead Ninjas to any roguelike fan.