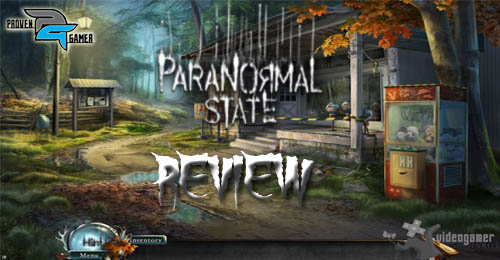 Have you ever wanted to go ghost hunting? Always curious about how all the ghost hunting equipment actually works? Yet, your still a bit iffy to go out and take part of a real ghost hunt with others. You can now, from the comfort of your own home, playing Paranormal State Poison Spring Collector’s Edition on you PC.
You can play Paranormal State on your Steam account. When the game starts off your listening to Ryan, the founder of Paranormal State Rearch Society, give you some background knowledge of himself and how he started PSR. He welcomes you as a new member to the team and then you, along with Ryan, go into a diner and meet the rest of the staff. Besides Ryan, there are four other members to the team that you will be getting instructions from or working with at some points in the game. Ryan is the founder and director of the Paranormal State Research Society, Eilfie is the occult expert, Katrina is the one who does all the interviews, Sergy is the tech specialtist and Heather is the team documentarian.
After the introduction to the team, Ryan updates you and the team about their next ghost hunting. Your heading to Poison Spring which was part of the Civil War battle. He briefs the team (including yourself, since you’re part of the team now), that he got a phone call from a lady name Iris who works at Poison Spring. She tells Ryan that there have been some unexplainable paranormal activity going on. She says that Poison Spring was once a battle ground during the war and many lives were taken at that time.
I have to say the graphics to the game are amazing. The cast members look exactly like the real members to PSR team. The way the leaves move in the wind, water drips from the pipe and mainly how the movement of the apportions float across the screen, away from you or towards you in the game. The voices to the characters are almost the same as the actual team in real life. You get to use a digital recorder, EVP Recorder, EMF Meter and Thermal Reader.
Throughout the game you are looking for clues, pieces of equipment that you will need later on in the game and solving mini puzzles. When you first start the game, you are given a journal to keep all your notes in and refer to through out the game. As you are playing the game you will constantly be referring back to your journal. In the journal you will see you achievements, where to look for things in certain scenes, how to put the equipment together once you have collected all the items. As you complete a scene it gets crossed off in your journal from the to do list. You can look at the map in your journal of all the scenes you have completed as well as which one you are on at the moment. There is also a section in your journal where you keep notes on all the team and items you have collected.

The game is fun to play and if you’re into ghost hunting, then this is the game for you. Overall, it’s easy to play as long as you use your journal to go through the tasks in the game. There are some things that bothered me while playing the game. There is not that much interaction with the other team members. You are mostly just reading the dialogue through the majority of the game. The only time someone from the team talks to you is when you going into a new scene or need to get a piece of equipment. When ghost hunting, you’re on your own and you should be working in a team of two. Over all, I am having fun playing the game, so all I have to say is happy ghost hunting.