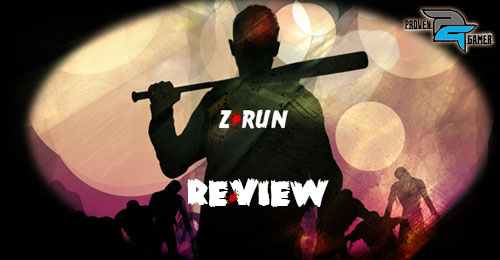 Oh, Z-Run, I can honestly say that I was excited to get to play this game.  A nice new Indie game for my PS Vita that features zombies and a decent but simple concept of getting from point A to point B.  Sadly though it’s nothing but that, a nice concept.

So let’s start with the fact that there is no story at all.  You are just some guy or some woman running down the streets trying to avoid or kill any zombie you come across.  Not a big deal, I didn’t expect for the game to have a story anyways, so just telling you now don’t expect it.  You have no idea why you are who you are or even what the hell happened. 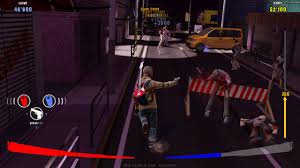 Alright let’s get into some gameplay.  The goal of any runner game is a simple one; get from the start to the finish.  In Z-Run it’s no different besides the hordes of zombies blocking your path.  So in order for you to meet your objective you have to either avoid them or kill them.  To avoid them you can just try to stay away from them, but they will lunge at you and at some point you are going to have to kill some (I mean what would be the point if you didn’t?).  You will pick up weapons that will help you kill the undead horde such as wrenches and planks for melee and a handgun and shotgun for firearms.  You will also have to avoid obstacles such as barricades and cars.  Skills like jumping and sliding will allow you to jump barricades or slide under vans, semi and other obstacles.  The sliding skill is honestly the most useful skill you have because it also allows you to slide into zombies and take them out without using a weapon.  You have a health bar and a stamina bar plus your inventory at the bottom.  As you play the game your character will level up, though it won’t tell you so make sure you pay attention, and you get points to spend that you can get more items like; more health, more stamina, sliding and jumping cost less stamina, more inventory, and plenty more.  There are around 30 levels in the campaign and a survival mode that has 3 areas that allows you to run endlessly until you die.

One of my biggest problems with the game is all the levels are very very similar, other than some visual changes.  Sure they may move some obstacles around but for the most part it’s just copy and paste of the previous levels.  Only one new enemy will show up about half way through the game, and it’s just a slightly bigger zombie that you can’t slide into like you can to the others.  There is just do depth here. In my opinion they actually punish you for killing zombies with a melee weapon because when you do you get blood splatter on your screen, that’s cool and all but when I’m trying to look ahead to see the next obstacle and I can’t because I got all this red gunk blocking my view, it tends to lead to my death or at least health loss and that’s just annoying.  All of your weapons either have durability or bullets, and you need to conserve them because they don’t replenish even if you have to start the level over. 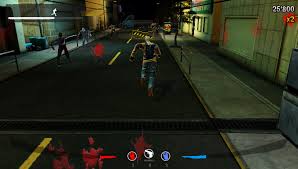 The environment is also not well thought out.  Plenty of times I would think I could jump over something and it turns out I can’t, even though I clearly jumped over very similar items before.  So because of that, I have either lost health or died, again this is annoying.  I also got into situations where I saw some ammo in a spot where a car was close to a wall and found out that I can’t get through the gap that was there, and because you can’t go backwards I just ran into the invisible wall until I died.  The game just doesn’t work well and I found it to be way more of a task to play it than I did having fun.

Z-Run is a runner game that disappoints in so many different ways.  Sure you can play it and few out there may enjoy it. I personally did not.  The game has nothing going for it IMO other than the fact there are actually zombies in it, and they are not even good looking zombies.