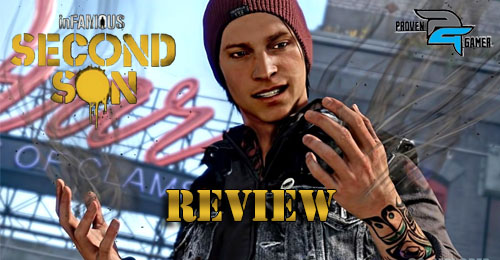 Even though I didn’t enjoy it as much as others, the Infamous series has always interested me. Putting players into the role of a modern-day superhero, the original Infamous was built on a pretty solid foundation. The sequel made a number of improvements, but the game still didn’t reach its fullest potential.  However, Infamous: Second Son finally places an emphasis on the remarkable powers that are at your disposal.

The series’ strength is emphasized with the power of the PlayStation 4.  This allows Second Son to trump the previous games, while showcasing the breadth of Sucker Punch’s abilities to create a living open-world for Delsin to explore.  In the process of building a new game, all of the frustrating elements from the series have been stripped away, such as the climbing element, while focusing on what works best: the superpowers.

Delsin is the star of Infamous: Second Son, a young man who is struggling with authority, as well as, his identity.  Delsin begins his journey when he encounters an overturned truck transporting super-powered individuals to a new prison facility.  Delsin finds one of the prisoners, called Conduits, trying to escape the scene.  Delsin absorbs the prisoners’ smoke-manipulating ability, in turn becoming a Conduit.

Conduits are perceived a little differently since Cole MacCrath’s adventures in Empire City and New Marais.  Similarly, everything that occurred to Cole doesn’t seem to have much affect on Seattle.  The Department of Unified Protection has declared Conduits as “Bio-Terrorists.”  As you can imagine, this term doesn’t sit well with Delsin or other super-powered individuals.   With the escape of the prisoners, Seattle is placed under martial law until the Conduits are brought to the DUP. 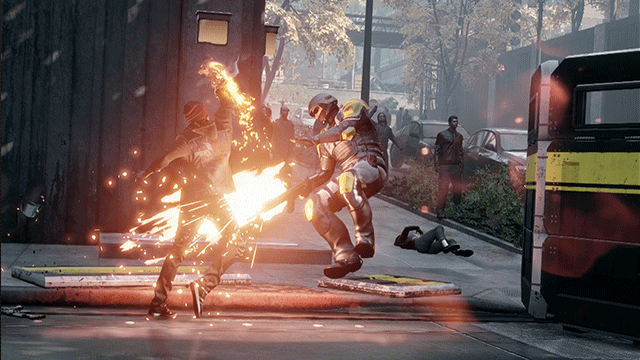 At this point, much of the oppressive vibe has already been set in stone and this is the foundation for the rest of the game.  While making your karmic choices, you can stake your claim as either a savior or a destructive antihero.  Either way, your major goal is to remove the DUP presence from Seattle.

You clear the map of DUP by destroying surveillance equipment, freeing or killing suspected Conduits, removing makeshift DUP bases, and beating enemies in certain locations.  When the district has finally been pulled from the DUP’s grasp, you get the sensation that your work has made an impact on the world.  Depending on how you go about it, civilians will either thank you, or they will cower in fear as you make your way through the streets.

Although plot and graphics are really nice when they work well, gameplay is what will ultimately decide whether the game is fun.  Fortunately Second Son excels in the latter category.   The gameplay was frustrating in the previous Infamous titles.  I didn’t like the camera, nor the way Cole would make his way around the city.  However, Delsin freely flows from street level to rooftop in some of the most fluid motions imaginable.  While inheriting new powers from other escaped Conduits, Delsin almost becomes a completely new character.  Just when you think that smoke is the epitome of awesome, the next few powers make smoke an afterthought.

These powers have a limited use.  However, since there are recharging locations scattered throughout the map, you will never go far without a superpower.  Delsin wields one type of power at a time, requiring you to switch them by charging your powers at whatever form of matter you decide to use.

Although the new powers affect the way you move around the world, their most notable changes are in the combat.  Smoke is amazing to manipulate at the beginning of the game, but the further you advance, the more you will want to experiment with the later superpowers.

Delsin collects Power Shards throughout Seattle, which you can then expend on an expansive skill tree. Power Shards in the earlier games were a burden to collect, but finding them in Second Son is easy and fun.  Since there are far fewer shards this time around, you only need a couple dozen to upgrade Delsin’s arsenal.  These powers upgrade your fighting abilities as well as your ability to traverse around the map.  Also, since Delsin is more of a glass cannon than Cole, your upgrades should reflect the guerrilla-warfare than you will need to master to beat the harder enemies.

While the gameplay is smooth and satisfying, the enemy AI is far from intelligent.  More often than not, I would kill DUP agents that were running around a car, seemingly in circles.  Likewise, when I would be pretty close to death, the enemy made it extremely easy to escape and recoup some of my health.  Although this was helpful, it certainly wasn’t intentional.  The enemy will not pursue you further than a few yards outside of their immediate radius.  Even on the hardest difficulty, it is rather easy to make a smoke dash out of danger, just to come back to the fight a few seconds later and finish off lingering DUP agents.

Although it is not horrid, the story within Second Son is not great either.  Some areas are extremely strong, such as the relationship between Delsin and Reggie, while other areas, such as the motives behind the DUP, is rather weak.  Ultimately, the gameplay is so strong that the story doesn’t have to be masterful, but that doesn’t give it an excuse for lacking in certain sections.

Overall, Second Son is polished and refined in most of the major areas.  Although there are a few hiccups, Infamous sets the bar high for future titles coming out on the PlayStation 4, particularly in terms of gameplay and graphical fidelity.